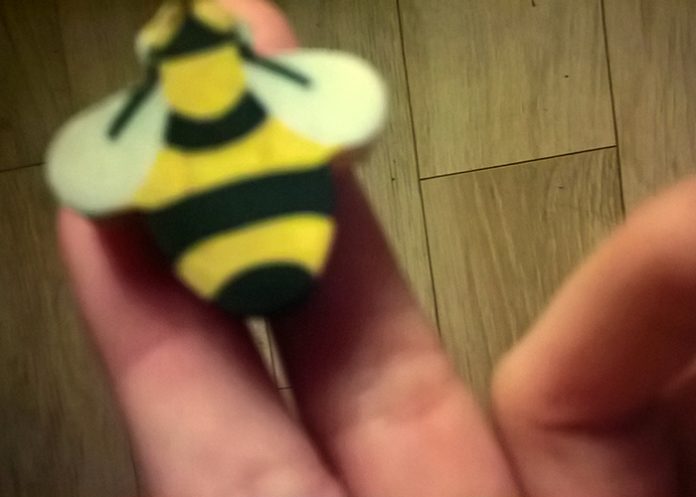 My first encounter of The White Pube was a little less than a year ago. They retweeted a review I’d written of Kit Brown’s exhibition at this very gallery. My first thought was admittedly at their name, wondering if it was serious or just a laugh, and my second was a little bit more confusing. When I looked in to them, and scrolled through their near incomprehensible website, it turned out their entire reason for being was to demean mine.

They focus on new lines of communication (emoticons and gifs), and use it to channel their ideas on specific aspects of fine art. I’m all for healthy competition though, so I thought I’d go and see their exhibition at A Small View before it was over for good. Surprisingly I didn’t hate it. If anything it reminded me of my reasons for getting into writing. The exhibition, which has a closing party this weekend, turned out to be a very confident statement of the two artists’ opinions of art.

There are injections of humour that began to justify the sly insults to the reverence of the creative industries. What these two are doing is twisting the reverence around and preach their own plan, rather than listen to others’. They’re very recent graduates who perhaps aren’t being listened to as much as they’d like; their reaction: shout about it.

That’s exactly what they’re doing. Taking their own ego, admitting they’ve got one, and imparting their knowledge on everyone who’s willing to be trapped in a room with it. The artists who make up The White Pube, Zarina Muhammad and Gabrielle de la Puente, have built an strong twitter following (@thewhitepube), with their very distinct brand of ‘art criticism’.

The pair graduated a few months ago, apparently on the day of the EU referendum. The couch they collapsed on when the result hit them is included as part of the exhibition. An exhibition that claimed to be a love letter to its viewer, but turns the only mirror back on the viewer. If it’s a love letter it’s a very anonymous one. But I guess that’s the idea, a love letter that reflects a particularly one sided kind of love.

It’s a little Wonderlandish, in a leap of faith way, and very much worth a look for anyone who’s unused to having the everyday questioned. It might not answer all your questions, but it’s not really meant to, it’s there as a statement in its own right, rather than a question, or answer, or instruction. A simple statement of an idea.