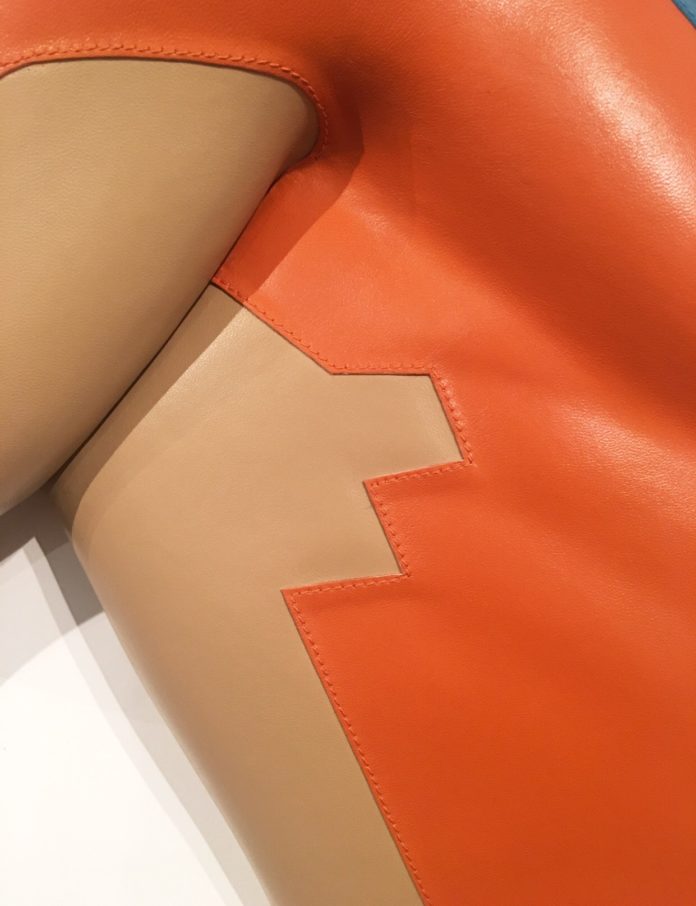 Whitaker Malem – Pop Artisans is the seventh and final exhibition in the Homospectives series at The Gallery Liverpool, and it is quite the spectacle to end the series on.

The amount and variation of pieces in the gallery space is more than enough to satisfy. The exhibition itself is made up of pieces from the collective Whitaker Malem, who specialize in leatherwork, beginning exclusively in fashion pieces for high profile houses such as ‘Vogue’ and ‘The Face’ magazine (putting Kate Moss in one of their pieces for her second ever shoot!). They have now transitioned into designing pieces for high budget movies, most recently the new Wonder Woman film.

Two bustiers from the Wonder Woman movie itself are featured in this exhibition, and it’s quite exciting seeing them up close. Having seen the iconic outfit on screen and then being within touching distance of it was not something I thought I’d be doing with my Saturday afternoon.

As the collective mostly work with leather, it was easy to see the cohesion in all of the pieces. Some of the earlier works in the collection are very Amazonian inspired, so it’s easy to see how they’ve managed to book a gig as high profile as Wonder Woman.

On another wall is an unusual corset, next to a recent photograph of Paloma Faith, which is possibly my favourite piece. It features a skin-like bodice, giving the illusion of a naked human body, but there is something here for everybody (including a photograph of a leather clad Kate Moss’ bum).

The pieces don’t only relate to fashion and movies, but span to metalwork and plastics. One interesting piece was on the far wall, which depicts profiles of two men and two women, with interchangeable torsos, which shows how closely our bodies resemble each other, apart from the obvious bits of course.

Two walls of the gallery are filled floor to ceiling with fashion magazine covers, which will definitely appeal to any fashion lovers out there. Leather can’t be the easiest of materials to work with, and the way it has been finessed in such a beautiful way is truly a talent.

Whitaker Malem, the collective behind these pieces, including the beautifully crafted Wonder Woman outfit, specialise in leatherwear design, and have been active since 1988. So I’m going to guess that they are more well versed on their leather than you or me.

As well as the pieces on display here, they’ve got quite the impressive back catalogue of leatherwear, including the bat suit from 2008s ‘The Dark Knight’, outfits for the Bond Movie ‘Die Another Day’, and ‘300: Rise Of An Empire’ (Which I imagine to be little more than 300 pieces of leather underwear).

If you’d like to see more of their work, they have permanent exhibitions across the UK, including The Museum of Leather craft, if you fancy a day trip to Northampton.

I had a quick chat with James, one half of DuoVision, the collective that currently run The Gallery Liverpool, about the current exhibition.

So what can you tell me about Homospectives?

What is your personal favourite piece in this collection?

“I quite like the fashion things, because they’ve all been in someone’s attic for 25 years, and things like these are just fantastic.”

What’s next for DuoVision and the gallery?

“Well we are supporting an exhibition by local artists next, and that’s supported by pride, and next year we’ve got a series of exhibitions starting in March, so it’s all sort of queer and popular culture. We keep the same themes but we sort of change it slightly.”

Honestly, the amount of iconic pieces in one room was really something, and if you are interested in fashion, movies or unconventional art, this is definitely something to check out before the exhibition comes to a close this December.

The exhibition is open to the public right now, and runs until the 10th December. The Gallery Liverpool can be found at 41 Stanhope Street, and is open 12-4pm, Tuesday to Sunday.