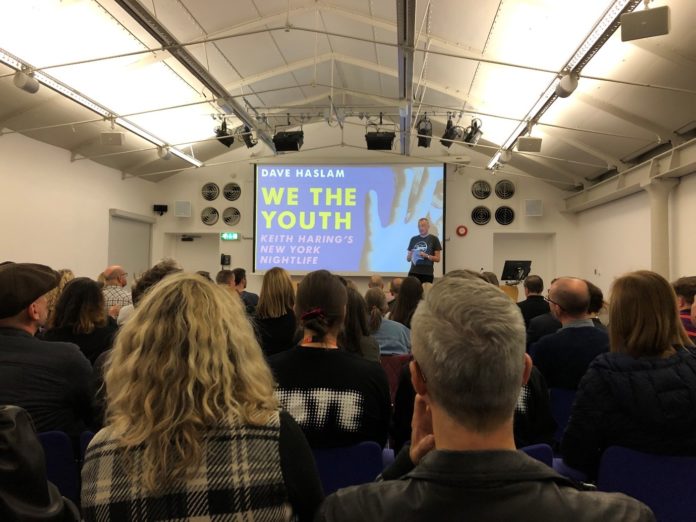 Author and DJ Dave Haslam fluently guided an audience through a condensed whistle-stop tour, exploring the nightlife, culture and music that inspired Keith Haring’s work. Haslam’s fluent delivery of this research offered an amusing and stimulating insight into the collaborative environments that were greatly functional and meaningful in Haring’s practise.

Haslam spoke of the derelict spaces that housed unconventional creative activity in 1980s New York. He refers to these venues and studios as “playgrounds” and “catalysts” for the misfit creatives that experimented and operated away from the mainstream. The multifaceted networks formed between artists, deejays, break-dancers and venue owners were expressed as essential cogs in the production of Haring’s success and the shaping of New York street culture. Short clips of weighty tracks were played mid-talk to immerse the audience in the collaborative, progressive energy of these environments. Haslam makes connections between the vibrating bodies of b-boys and the linear waves that surround the figures of Haring’s work. It’s this interweaving of art, music and nightlife that innovated this pivotal era. In Haring’s world it seems partying and networking were one in the same.

The event closed on a Q & A that played out as more of a discussion. We drew on comparisons between the culture and environments that surrounded Haring and that of our local scene. The motif of this discussion was reflective upon the conditions of the modern age. Haslam stated that his MacBook couldn’t provide the feeling that celebrating life on the dancefloor would.

The phrase “energised youth” echoed throughout the launch. We were reminded that something is always happening. That something is being produced on the fringes of the inner-city, which will be considered important in 25 years. “Probably in ****ing Rochdale”.

Review: The Jam – About The Young Idea at the Cunard...