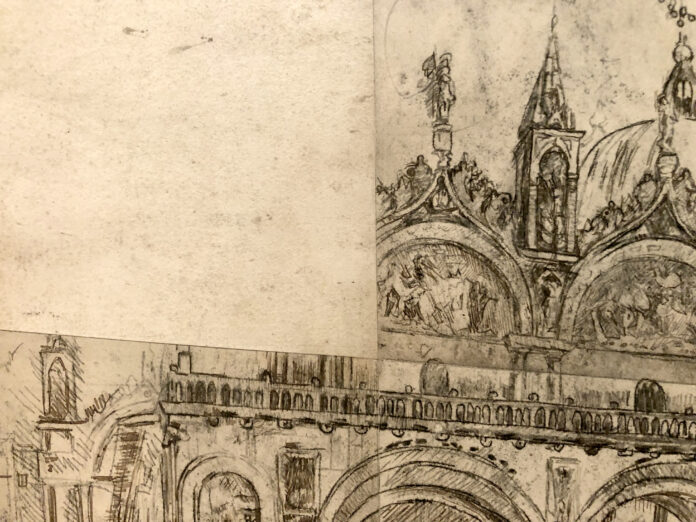 I can’t help finding the Sickert exhibition a little bit funny, not because of its content, but because of its press. The week of its launch you could barely turn on the news without local reporters stumbling over each other to tell you there was an exhibition by the suspected Jack the Ripper opening at the Walker.

There is almost no evidence for this. In fact, the majority of the evidence almost certainly proves he was not, and could not have been the, or a, serial killer. And in the third room of the exhibition, in big letters on the wall, is text that reads “Sickert was not Jack the Ripper.”

So let’s forget that myth, which has no doubt contributed to the fame of the artist, and focus instead on the exhibition.

I’m a sucker for an exhibition that dedicates space to talk about materials. So I was thrilled with the passageway between the major sections of the show, which focussed on his drawings, his studio and his paper.

There is almost nothing you can’t learn about an artist from their paper. In Sickert’s case it was a compulsion to draw. He had a preference for paper that felt substantially handmade. It holds the ink better, and help define pencil lines, but chose mass produced paper which mimicked the qualities of handmade sheets instead. Those pages were bound, and kept once they had been used. So we know there were likely hundreds of other drawings which didn’t get the same grace.

They’re lost now, but what we’re left with is selected work, curated by the artist as either a series of working drawings, which were drafted up into larger finished paintings, or remained forever as ideas – paintings that never happened.

But for all his planning, all his preference, Sickert was still impulsive, with many of the drawings sketched out on lined paper torn from exercise books, because, as the Walker make an effort to tell us, Sickert didn’t find any fame as an artist until he was in his 60s.

Prior to that he was a working actor, and later worked for Whistler as a studio assistant, giving his the opportunity to travel to Paris to meet Degas, and see Manet’s studio up close.

As a human being, more than as an artist, his life is led by a passion for learning. All of his work has clear influences of artists he met on his travels.

So while the value, and importance of his work is spoken about by the Walker, it’s only by exploring his life that it becomes apparent. Where there are artists whose work was important for its own style, Sickert’s is important for its relationship to the styles of other artists.

It’s an art historical moment which led from one generation of artists into another, and a combined document of a life chasing a dream at a time where art was changing dramatically into something more like the art world we see today, with less global celebrities, and more jobbing artists creating careers around 9-5 jobs.

The tight corridors of the exhibition tell that story, and explain, in clear terms, the value of this work to the Walker’s collection.