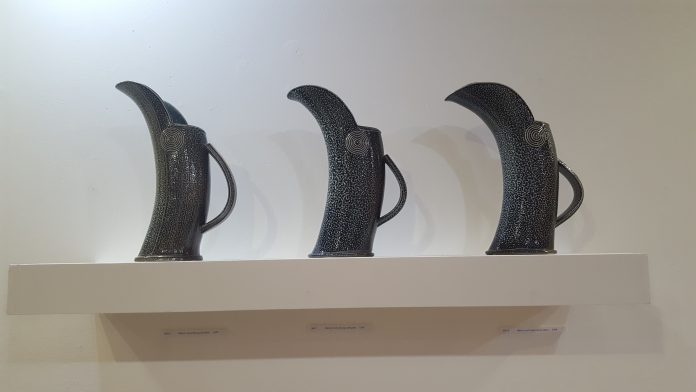 Walter Keeler’s pottery history is as diverse as the work he creates. Inspired by the tradition of pottery, and his childhood experiences of picking up broken pots along the Thames, Keeler creates vessels that are both functional, yet strongly ornamental. An odd combination in itself, but Keeler manages to combine both elements together well.

The history of pottery stretches back thousands of years; it is often regarded as the most ancient form of industry. The first functional pots were made between 10,000 – 9,000 BC. This functionality continued through time; in Britain Spode epitomises the quintessentially beautiful, yet functional pottery. Keeler’s drawn on this far-reaching history, creating a dialogue between the past and the present ceramic production; a dialogue between form and function, and visually striking decoration.

As you would expect during winter it gets darker earlier. So when I approached his work I was immediately intrigued by how the light and shadow interacted with the vessels. The shadows mimicked the smooth edges, throwing images along the wall that served to emphasise the gentle slopes and curves. This interaction added a new dimension to the work. Not only were the vessels being viewed singularly, but also in relation to the shadows surrounding them.

The interplay between the physical and the metaphysical, gave the impression of abundance, aided by his use of repetitive forms. It’s not unusual for potters to create the same objects repeatedly – Edmund de Waal immediately springs to mind. He creates thrown vases repeatedly, similar in shape, size, and colour. These are then installed together on shelves. Despite the perceived uniformity, both artists’ works have variable degrees of difference. In regards to Keeler each piece is unique in its glazing, and pattern. De Wall’s differences are far subtler.

The forms themselves were oddly natural in their composition. The gentle upward slope of the spout, and the branch like handles and feet appear completely disjointed from the salt glaze exterior. When combined with the spotlights and the darkness seeping in from outside, his forms looked quite majestic. They almost shimmered against the stark background.

In this exhibition it’s clear to see that Walter Keeler’s practice is rooted within a rich history of making practices that have been altered very little over time. A history that is only getting richer as contemporary artists like Keeler, Grayson Perry, and James Duck seek to reinvent pottery as an art form. It’s plain to see that ceramics is still alive, and going strong.