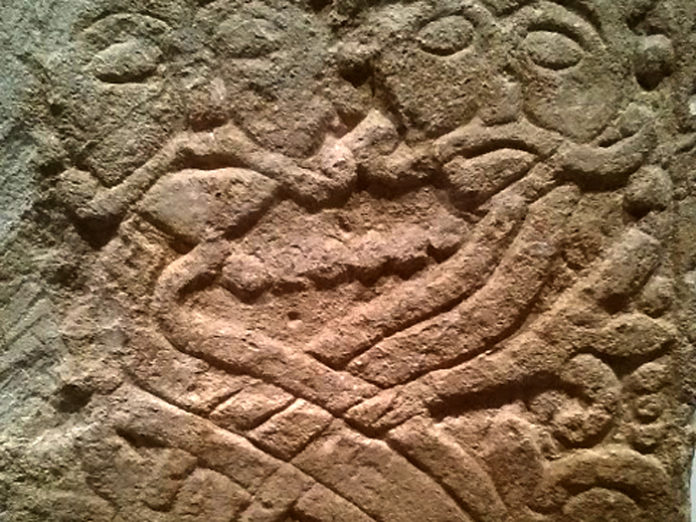 Viking: Rediscover the Legend, The Atkinson, until Saturday 7th July, £5

Two of the loveliest pieces in Viking: Rediscover the Legend are saved for the very final room. One is what appears to be a small Viking self-portrait carved into a bone plaque.  It’s a simple enough carving, who beyond the beard isn’t immediately recognisable to untrained modern eyes as a Viking.

But then, what do we expect a Viking to look like? We’ve all grown up with some iteration of the Vikings as raping-and-pillaging Scandinavian brutes, out for glory in battle above all else. A rehabilitation of their image has been bubbling away for some time now, though – a change of the story which focuses on the lives of the settlers beyond the means and myths. This exhibition, brought to The Atkinson with the aid of the British Museum and York Museum, aims to play a part in this.

In order to no longer see a group as an ‘other’, you have to understand them as the same as you. So a piece such as this self-portrait becomes a point of connection: more than a thousand years ago, here was a civilisation of people just as keen to represent themselves as we are with selfies.  And the image they’ve chosen is nothing more fearsome than a face, an identifiable symbol for connection.

The sense of recognition is the same as that you’ve already come across in the other rooms of the exhibition. Of course there’s Viking swords – but there’s also the breathtakingly engraved York Helmet. Not a Viking artefact, but an Anglo-Saxon one. Proof that rather than being unarmed or innocent, the society the Vikings encountered when landing in Britain was accustomed to warfare and uncertainty. Luckily for us, really – for sometimes circumstances meant the abandoning of precious objects such as the York Helmet, for us to discover for our own time. Indeed some of the greatest treasures of the exhibition are the hoards left behind, perhaps in these very circumstances – sets of jewellery, coins and silver, rediscovered recently by detectorists. Treasure is everywhere, but the Bedale Hoard’s diversity of jewellery is particularly appealing. Polished and restored, the hoard includes stylish, carefully worked pieces you can imagine still being popular today.

The second significant item from the final rooms is a ‘Lewis chessman’ – a piece of the infamous complete set found on the Western Isles of Scotland. Thought to have been left by a Viking trader, they evidence not only the endurance of Viking imagery and culture, but also the importance of trade to the Viking way of life. Trade has, in fact, been everywhere in this exhibition. The Vikings had no coins of their own, but were happy to trade with coins originating anywhere from Britain to Afghanistan. An eye-catching green glass bangle turns out to be distinctive for its Byzantine workmanship. No civilisation of mere destructive conquerors could forge such a range of alliances and connections.

None of this is to say that the Vikings weren’t also sometimes savage conquerors – a stone carving of a warrior taking a female slave as bounty stands testament that these ideas may have been justified in individual experiences. But the people who called themselves Viking deserve to be remembered as much for the legacy of culture, trade and language that they left us here in the North West as for the more salacious aspects of their lives. Vikings: Rediscover the Legend is not perfect – the clear storytelling of the start become a little muddled in the attempt to fit as many artefacts of everyday life in as possible. But as a survey of a key part of our cultural heritage which will appeal to the curious of all ages, it’s well worth a visit.