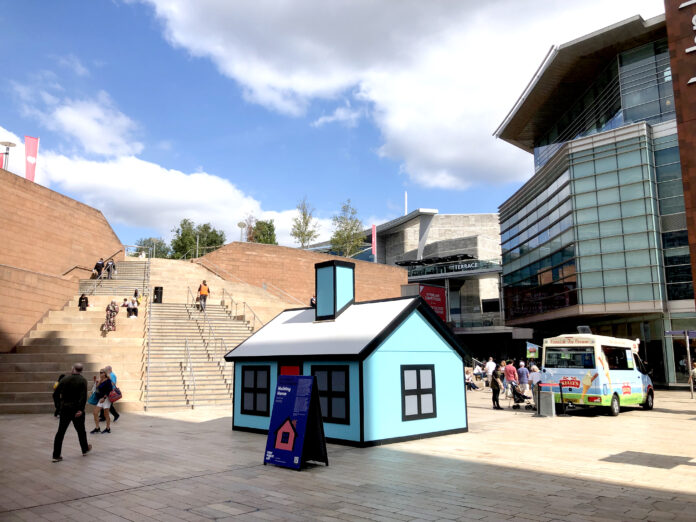 Very Public Art feels right. You know? Like a listening project rather than a show and tell. It feels local, and relevant to its time and its place.

I’m usually a pretty vocal critic of municipal art. It too often ships in international artists when local artists could do the work better, and not just listen to communities, but represent them. But Very Public Art is a showcase of local community vision, produced by local artists. It’s large scale, interactive, and set up to stop you in your tracks.

I went for a slow walk around the installations (they’re not all there at once, with each opening at different times, so I’ll be back next month for the rest), and at each of them, there were people taking selfies with the work, or pictures of the kids lined up in front of them.

It’s easy to see why, because they’re intriguing, out of place, and inspire day dreams. Whether it’s Laura Brownhill’s magpies flying over china town, or the fairy tale house in the middle of Liverpool ONE, there’s a huge mix of installations and events coming up over the next couple of months.

The magpies, otherwise known as Cowheard and the Weaver Girl, are part of a an immersive outdoor stage, produced by Laura Brownhill in collaboration with DoES Liverpool and Simon Armstrong, from Design Laser Play. The stage sets a scene from the mythological story of the Chinese festival Qixi, and invites audiences to step into the artwork, and into the story. The magpies, just fyi, form the loveliest part of this story – where two lovers (Zhinü, the cowheard, and Niulang, the weaver girl) are reunited between heaven and earth by a bridge formed by a flock of magpies.

Holiday Home, the house in Liverpool ONE, is created by artist Richard Woods, based on a typical British bungalow. Less poetic than Laura Brownhill’s work, this gets straight to the punchline: “Perhaps we have never felt more connected to the places that we live. Perhaps we have never bene so bored by them.”

The house, which is like something a cartoon threw out into the real world, is just joyful. It’s a separation from reality, without bowing to the repetitive adage of escapism. Because it’s ok to be bored by home. We’ve never spent so long there. And we’ve rarely been so aware of the physicality of the space around us.

There are more installations to come, and they’re rolling fairly flexibly over the next few months in public spaces including Hope Street, the Pier Head and around St George’s Quarter.

The only criticism I’ve got of these installations is that there’s not been nearly enough noise made about them yet. They’re not here forever, and when they’re gone, they’re gone. So don’t miss them, get out, and see some public art by some of the region’s best artists.

Words, Kathryn Wainwright
Find out more about Very Public Art and keep up to date on the programme at www.cultureliverpool.co.uk/very-public-art

Review: Space is The Place, Patric Rogers & Angelo Madonna at...