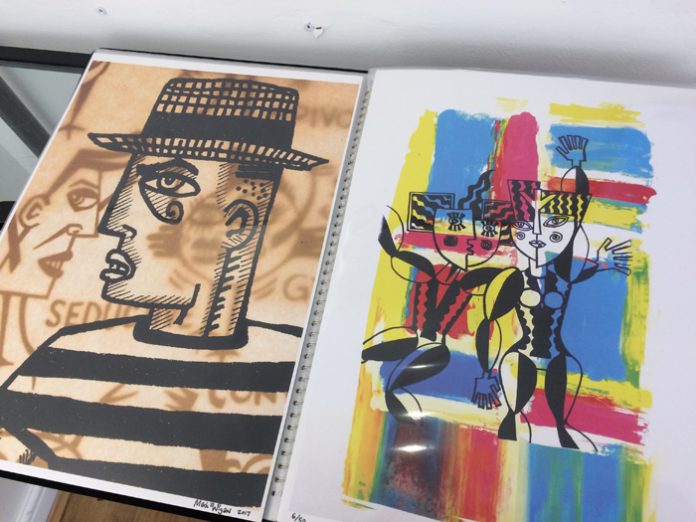 In becoming the temporary home for The Transglobal Art of Mark Wigan, Chester Arts Centre provides a shock of colour against the surrounding Victorian architecture and grey cobbled streets. The intimate gallery space was brought to life by Wigan’s cheeky illustrations of impish creatures and surreal landscapes.

His signature style stems from an abundance of social and cultural influences that make his work otherworldly yet accessible. In his exhibition, the urban art and sub-cultures of London, New York and Japan meet the indigenous art of South Africa and the far east. Taking inspiration from his travels to these parts of the world, Wigan has found his own visual language of dancing and distorted shapes.

Throughout the exhibition, Wigan has been drawing one of his imagined worlds onto the Arts Centre’s window. Using a white ink pen, he has drawn mischievous-looking monsters bulging out of cityscapes that are surrounded by tidal waves. Posting an image onto Twitter (@markwigan) he describes this technique as, ‘moving from the conscious mind to the unconscious one, the joy of free flow mark making.’

An element of spontaneity is evident in Wigan’s work and there is an overriding feeling of playfulness, but these are not just mindless doodles. Flicking through his portfolios in the gallery, I find vibrant scenes of colours and shapes, as well as chaotic collages of detailed and flamboyant characters. His work for I-D magazine in the early 1980s offers black and white illustrations of punk identities and youth culture, which I could have studied for hours; taking in each unique character in the crowded page and reading their speech bubbles and T-shirt slogans.

Along the walls of the gallery and hanging from the ceilings are pieces that have a clear resemblance of Aztec, Celtic and other ancient arts. His cartoon-like drawings and animated shapes become a pictorial language, each shape and specific colour suggesting an emotion and narrative. Wigan uses square and triangle shapes when creating his sculptures that hang in front of the window and stare out onto the Chester street with playful expressions and spiky heads. These bold shapes are evident in his drawings and paintings too, further adding a ritualistic atmosphere to the exhibition.

Neon colours on black canvases heighten the intensity. The work is like a modern interpretation of tribal icons, which take the form of neon-lit street signs, commercial slogans and street dwelling mutants. Paintings of totem pole-like sculptures have an animated twist; the creatures could be found in comic books with humorous expressions, batting eyelashes, and sharp teeth. These amusing and euphoric images have made Wigan’s work transcend artistic forms, as his drawings have been used for animations, set designs, textiles and to decorate public spaces.

As icons, such as emojis and memes, have become popular ways to communicate online, Wigan’s work can point to the timelessness of visual communication. The simplicity of his vivid drawings tap into imaginations and allow the viewer to have their own creative interpretation. In the weird and bizarre landscapes, we find a reflection of ourselves and the society we inhabit.

The Transglobal Art of Mark Wigan
1 of 4
Advertisement