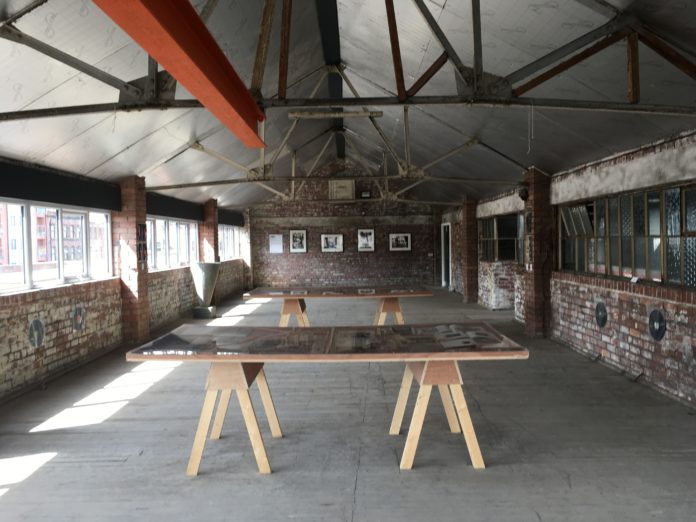 Words and photographs by Moira Leonard

The new ‘Fabric District’, Liverpool L3, was officially launched last weekend with the opening event at Tapestry on Kempston Street. Tapestry is a cool, ‘hip’, flagship venue with exposed brickwork; big open flexible spaces; a very minimal stylish bar area and bare lightbulbs hanging at a discrete distance. All the things we have come to expect in the trendy places in Liverpool these days.

At the entranceway a smokin’ hot bright red ‘bodice-riper’ dress creates a tableau of the delights that may await. It is no surprise then that the launch is very slick, complemented by a glass of something gorgeous and lots very healthy tubs of quinoa, seeds and healthy salads.

With great expectation we are ushered into the main room which will double up as a fashion show arena on Friday night and a throwback night club on the Saturday. ‘Club Big’ is lit up in red neon to the right of the huge projector screen. Loud thumping music pumps out from the huge speakers suspended above our heads. We are witnessing the public launch of the vision for the new ‘Fabric District’ and Time Tunnel is the arts festival designed to kick start the process.

We are introduced to the man behind the project: Jason Abbot, owner of the Tapestry with a background in socially beneficial property development. He tells us that his family owned a business locally for the almost half a century and he was dismayed about how the area was deteriorating. So, having seen the rise of the Baltic Triangle he set to work encouraging key stakeholders to buy into his vision for the future.

Not long after, the Fabric District CIC was born: the official organisation which will lead the regeneration plans. The big idea is to turn the Fabric District into a ‘cool’ place with lively green streets, somewhere that will nurture long standing residents and bring new people and businesses in. A grand vision and one that is very much supported by the LCC and the Deputy Mayor Ann O’Brien who describes it as an area ‘exploding with creativity and vitality’.

Time Tunnel is the first ‘international’ arts festival event at the new district and it aims to set the precedent for a series of events to be held there in the future. Professor John Hyatt, Director of Art Labs at Liverpool John Moores University is the overall curator, bringing together many different strands of exhibitions and events. He says his ethos is to ‘raise the quality of (human) life through art and bring beauty in the world’, an ethos he shares with Abbot and the Fabric District CIC, so he was delighted to become involved and offer his expertise.

He goes on to explain that the idea around Time Tunnel came to him after a discussion with a friend about Liverpool being a radical, edgy, creative city and it got him to thinking ‘what has changed and what has stayed the same over the last 50 years? Both 1968 and 2018 see massive popular protests but they are very different in how they are played out’. So, the starting point for the exhibition programme is 1968. Okay. That’s clear.

We are then invited to the top floor to see a collection of Photo Montage from the inventor of the genre: John Hartfield. These are images he developed in the 1920s and 1930s to fight Nazism. Whilst they are very powerful images, I am left questioning the connection to 1968 really, although I did hear that he gave a talk on his work in Liverpool at the time and gifted this collection to the University. 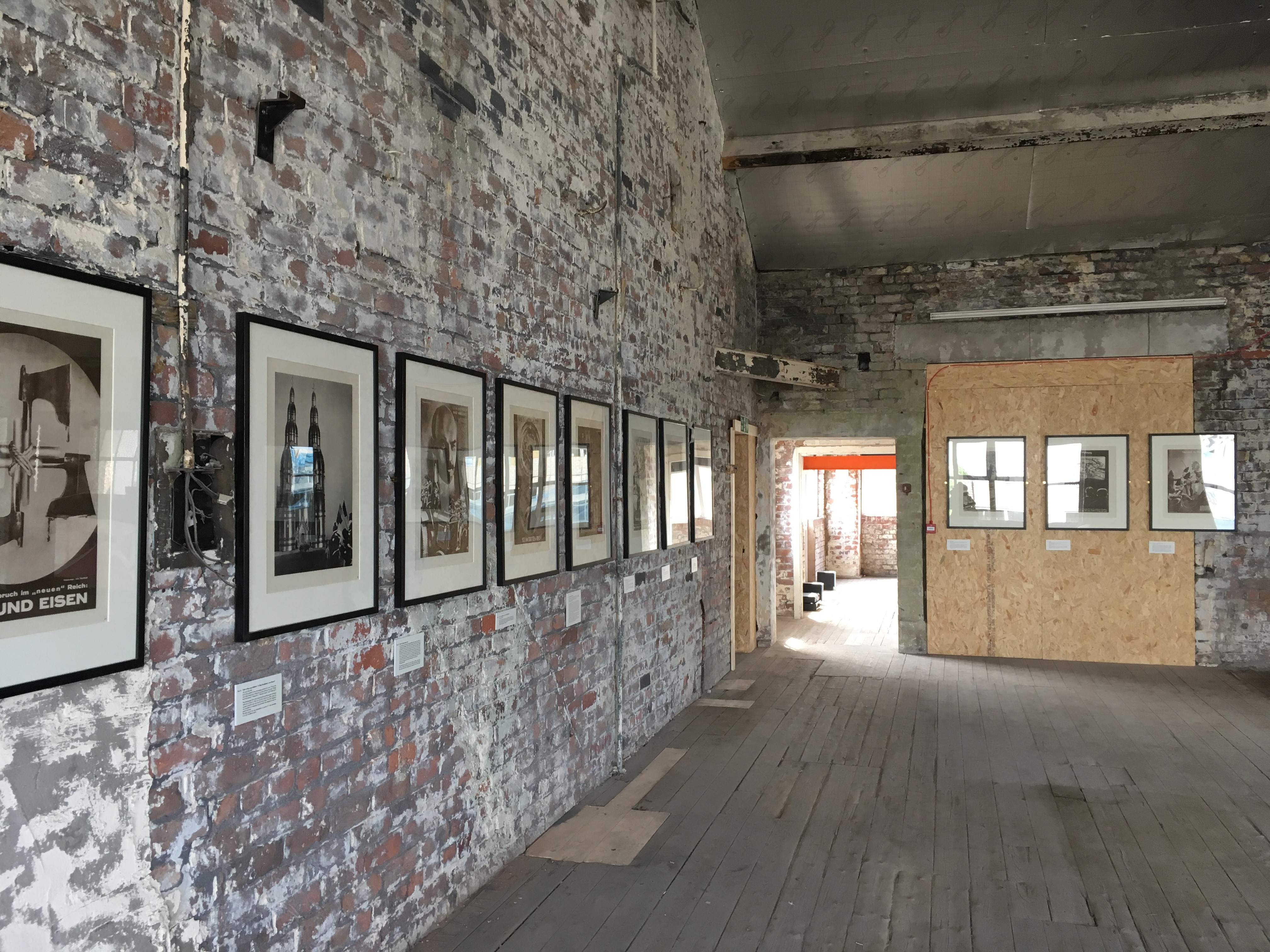 Hartfield is shown alongside the history of the ‘Scottie Press’, a radical local newspaper from Scotland Road which has endured over the last 50 years. If you stop and chat with the stall holders they will give you the opportunity to buy the latest issue and a collect a free reprint of the very first issue too! And finally, on this floor there is a display exploring the Beatles activities in 1968, albeit mostly newspaper cuttings from the time.

Around the corner from the Tapestry is another warehouse space which has been opened especially for this festival. You will know the spot when you see a very large ‘31’ spray painted beside the entrance way. Inside here you will find a selection of military head wear (well, hats), football memorabilia and generally angry photomontages from the present day. 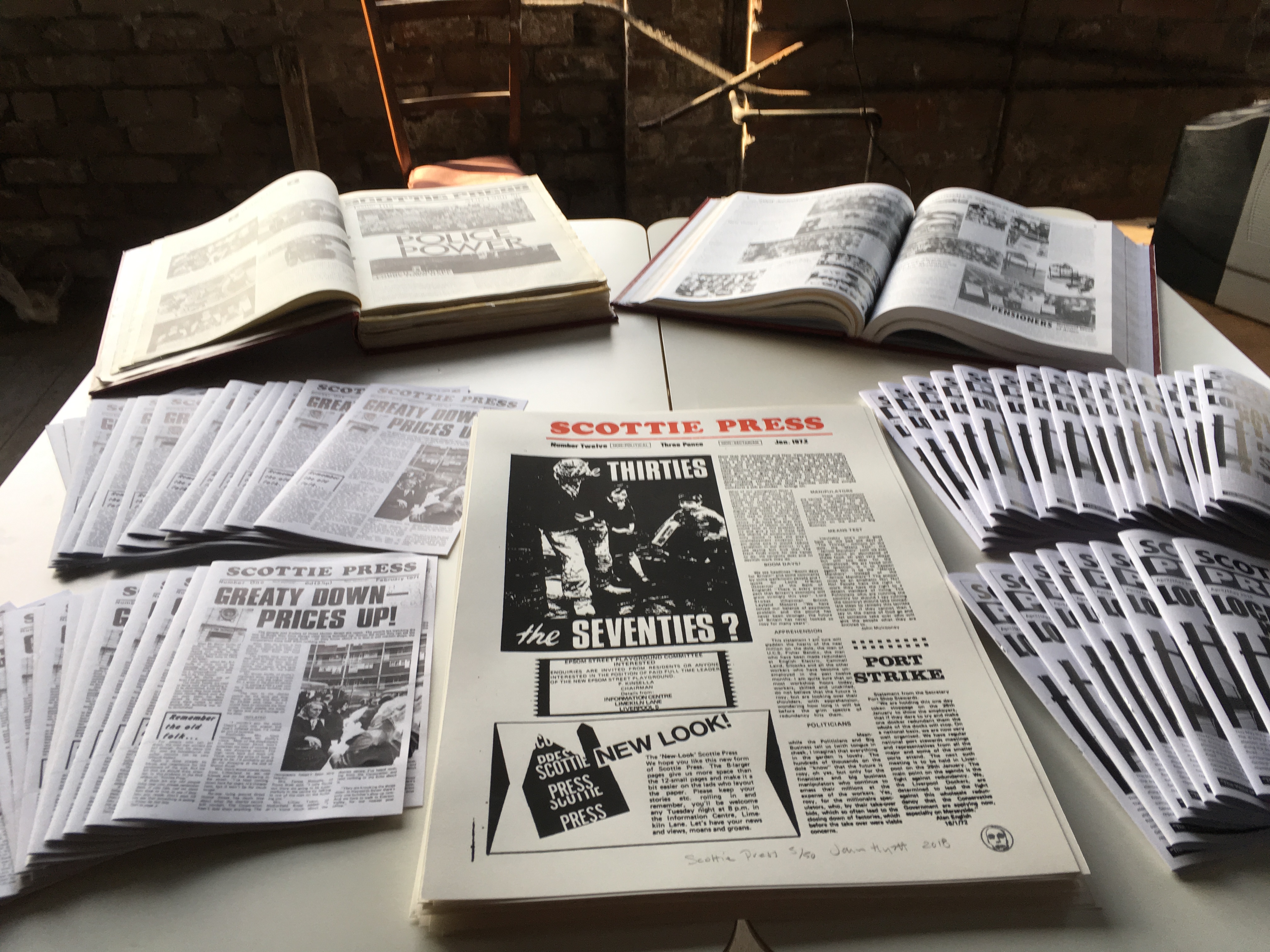 There are an interesting, if academic collection of exhibitions on display and if nothing else, the public art spray painted directly onto the brickwork of many of the buildings is definitely worth a look. Sadly, I know very little about these artists and whether their graphics were planned or not, however, they have all tagged their pieces so if there is anything of specific interest, I am sure it will be pretty easy to follow up. 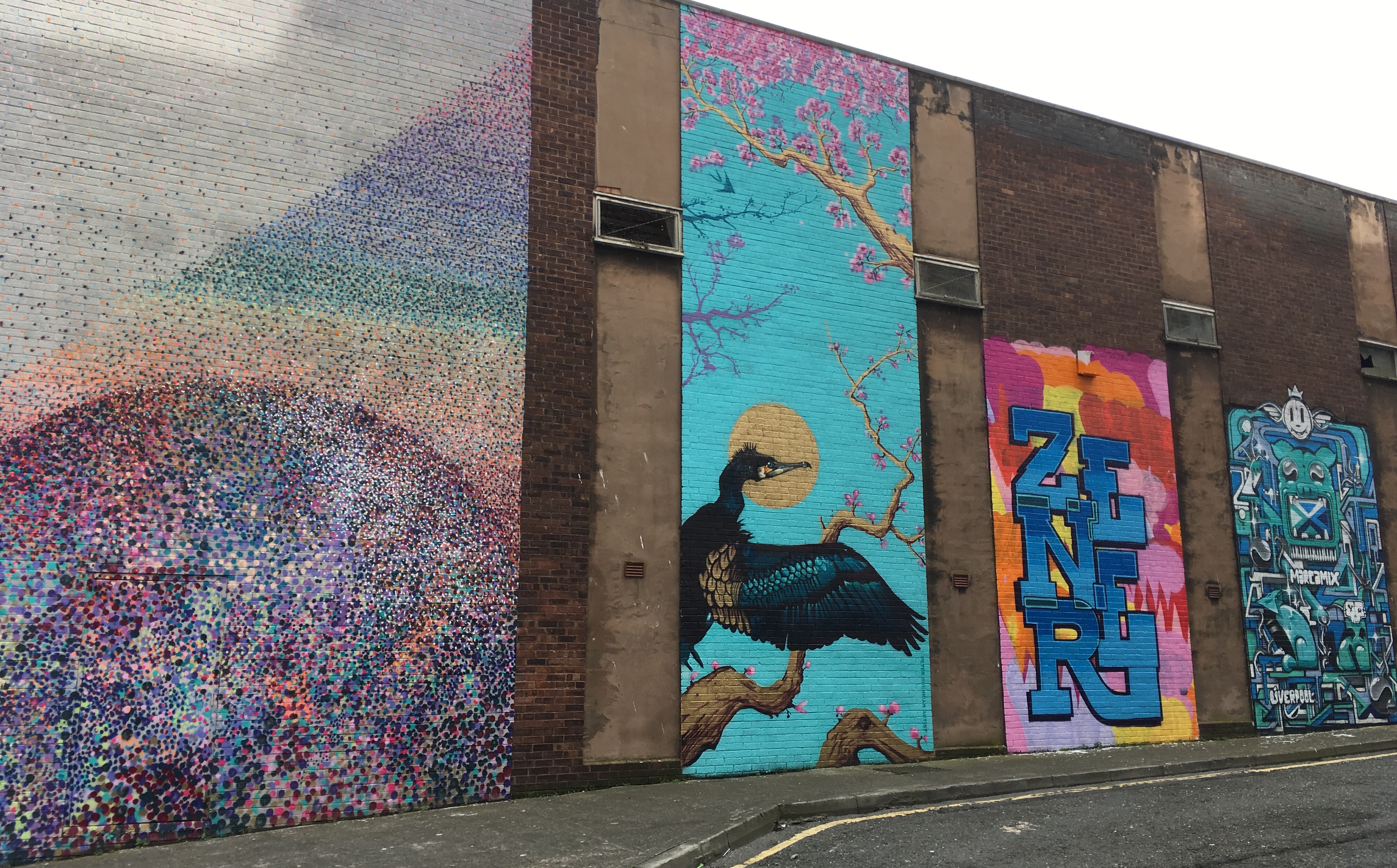 Alongside the festival there is also an open weekend for another organisation housed within the Tapestry called ‘Does Liverpool’. Once you pick up the nerve to go through the front door (which doesn’t make it exactly clear that it is open to the public) you will find a very friendly welcome. It is a collaborative creative space for artists to produce work with highly specialised technical equipment including 3d printers, laser cutters and any manner of amazing gismos. Does Liverpool are open to any artist taking advantage of these facilities and have set variable rates depending on your usage. If you want to find out more just drop by or check their website for details

Overall, I would have welcomed a more accessible approach to finding my way around the exhibitions during the day, and perhaps more concise, engaging interpretation materials to complement the displays. I found the visual art aspect very academic, which is fine if you are in a period of serious study , but I suspect that the festival really comes into its own during the evening events performance programme though.

I really, really hope the Fabric District vision works out as I can only applaud the sentiment behind it and the relentless work in moving the project forward.

On a lighter note while you are there you can always pick up some fantastic fabrics and bits ‘n’ bobs to get your creative juices flowing…I’m just heading off to upcycle some of my wardrobe as we speak!

Exhibitions and events in various locations. Details can be found at http://timetunnel.johnhyatt.co.uk/