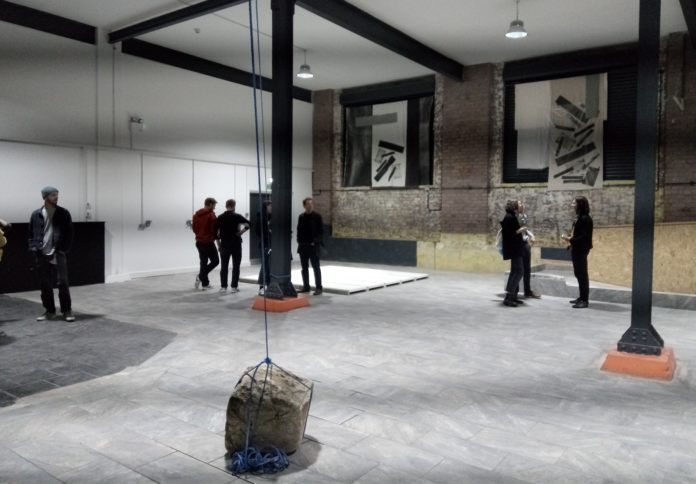 Review of “This Is What I Came Here To Do”, The Tapestry.

words and photos by Lorraine Bacchus

For this weekend only 12th & 13th October, four artists have taken over a vast warehouse at The Tapestry in the city’s Fabric Quarter.  It isn’t easy to make an impact on a space of this size and the temptation could have been to try to fill it.  But instead the artists Leo Fitzmaurice, Stephen Forge, Max Mallender and Sufea Mohamad Noor have judiciously presented pieces that work with the building and also reflect, in one way or another, its industrial past.

Each artist has only presented one or two artworks, the scale and form of which are all inherently different, of course, and yet together they make for an intriguing cohesiveness.  They had plenty of room to choose from here but the artists haven’t gone for obvious placement.

Sufea’s block printed, multi-layered hanging collages – all made from a variety salvaged materials – are set against the black shutters of two large windows, which she chose because they act as natural frames to the works.

Leo’s two modified car bonnets stare down at us, apparently smiling, from high up on the imposing side wall, one of them from a bricked up window.  The humanoid quality he has given them makes one want to smile back. 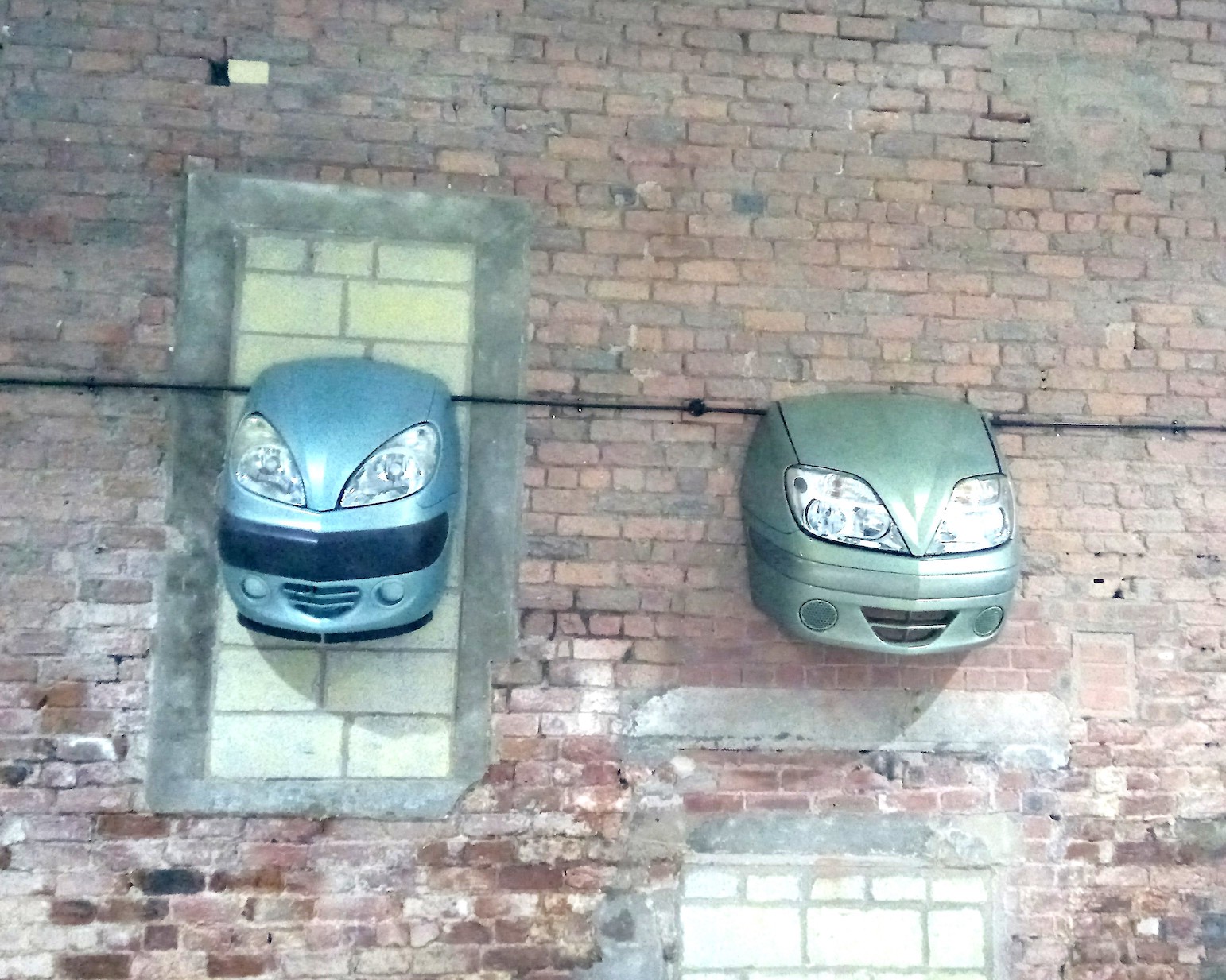 Max has an earlier history in graffiti art but here he has used the peeling paint of the brick wall as a backdrop to his monumental painting on un-primed canvas, overlaid with tissue paper.  Nearby is his large rock, something else that made me smile, in the way it is tethered to the ceiling with rope that could not possibly support its weight.  The rope cuts across the space creating unusual shapes through which to view the artworks.

The meticulous placing and whiteness of Stephen’s cast concrete floor tiles renders them a hard-won dignity, given that in this context such a ubiquitous material could have led to them being overlooked as simply part of the fabric of the building.

There are indeed some objects on the walls that are part of the former use of the space and the fact of the artists choosing to leave them in situ is a Duchampian gesture that reflects well on them, i.e. that although they are all serious artists, they do not take themselves too seriously. 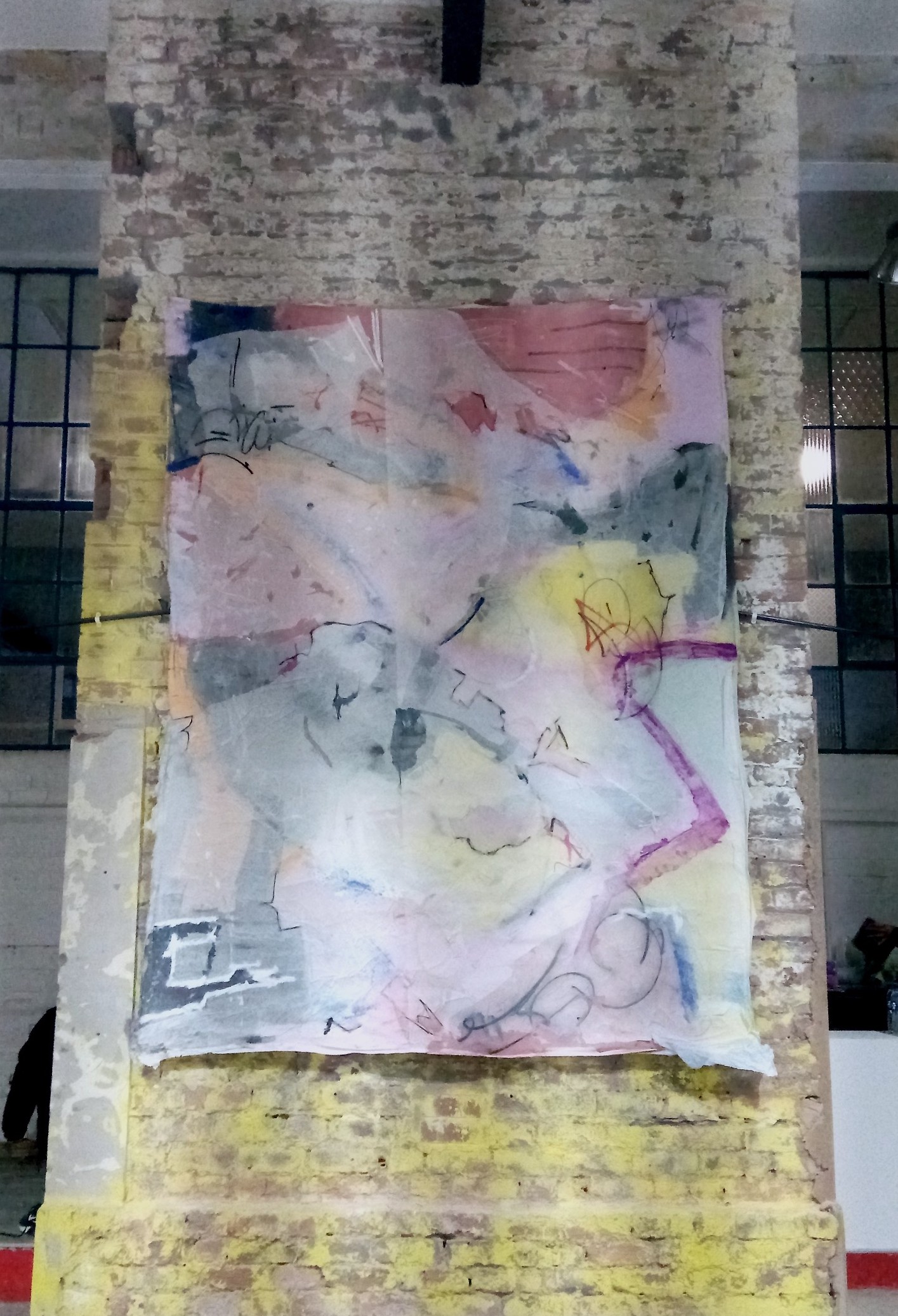