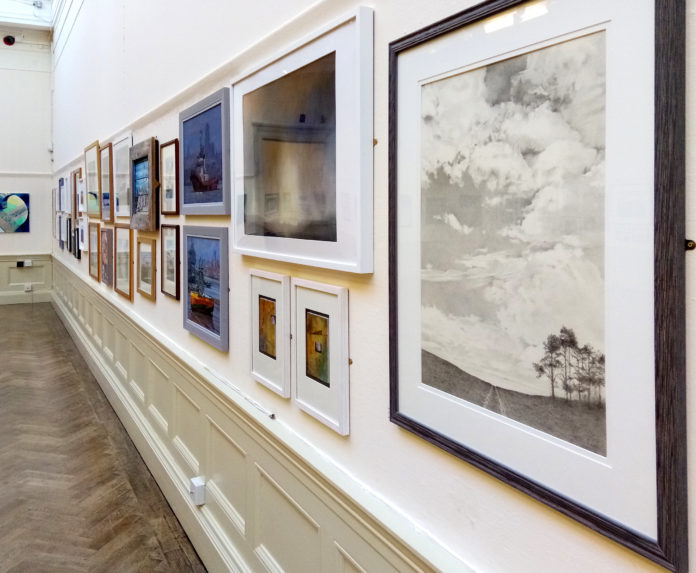 The Williamson Open has been happening in more or less the same format for over 90 years, but this was my first time so I was unprepared for its scale. Three of the Gallery’s largest and most elegant rooms are given over to the 371 selected works.

On entering the first space, the diversity is what is most striking – of style, subject matter, media and, perhaps least important of all, of accomplishment. This show is the epitome of a democratic happening in that it gives beginners the same opportunity as the professionals, not only the chance to be exhibited but also to form part of the Gallery’s permanent collection. The three prize-winners’ works are purchased by the Gallery, which means they will be keeping company in the Williamson’s archives with the best of British artists from the past 250 years.

Before looking at the catalogue for the winners, it’s fun to walk through the show to choose one’s own top three. Mine were all different to those selected, which is as it should be, art taste being entirely subjective. That said, in order to reach a verdict presumably those involved in the selecting must have to put aside their personal preferences to focus on criteria such as originality, composition, initial impact, and how the work compares to other entries.

Visitors can vote for their favourite; the winner receives an Award named in memory of Mrs Kay Greenwood-Casey, arts critic for Wirral News, whose pen-name was Kriterion. Such is the competitiveness around the Kriterion Award that there is a warning in the Exhibition Catalogue against vote-rigging.

My number one was a small still life in oil, Lemon and Glass, by Hugh Askew, which has a lovely translucence to its palette. Next was a screen print by Tony Knox of a war veteran, Dusty Miller, a powerful portrait made all the more interesting through its use of layering. Third was a quiet landscape study in acrylic by Anna Clark, From The Road.

My prize for the most bizarre female nude goes to Brian Minnery for his mixed media Life Study. I know animal prints are all the rage this year in women’s fashion but there is something disturbing about a headless nude woman whose skin has been transformed into zebra stripes.

Only a few of the works had been sold when I visited, which is surprising given that the prices start from as little as £20. Even for the more pricey pieces there is the possibility of buying through the Art Council’s ‘Own Art’ scheme, in which the Williamson participates and which offers interest-free credit for purchasing original art. But of course, making art isn’t all about the selling; what this exhibition shows above everything is that people of all capabilities are engaged in creative expression for sheer pleasure and enjoyment.

The Williamson Open accepts entries from any artist or photographer who has a connection to Wirral through birth, education, residency or occupation. After viewing this exhibition one has the sense that there must be something in the Wirral water to inspire such an out-pouring of creativity.

A bonus when visiting the Williamson is that there is an excellent café – a sit down now being a ubiquitous part of art viewing. Some critics say that the eatery has become more important than the venue but that smacks of elitism. London’s Victoria and Albert Museum bucked such highbrow notions with its advertising campaign, which included the slogan “An ace caff with quite a nice museum attached”. The Williamson also has a wide-ranging bookshop in the entrance hall and an extraordinarily well-stocked art materials shop. The latter is run by the enthusiastic and knowledgeable Kat Miturska, who is herself an artist.

Entry to the exhibition is free, though donations are always welcome, and the catalogue listing all the works costs £2, which is a small price to pay considering the amount of time and effort that goes into the organising, curating, selecting and hanging of an exhibition such as this.

—
The Open runs until 5th May. The gallery is open Wednesday–Sunday.
Words, Lorraine Bacchus

Review: Astronomy Photographer of the Year