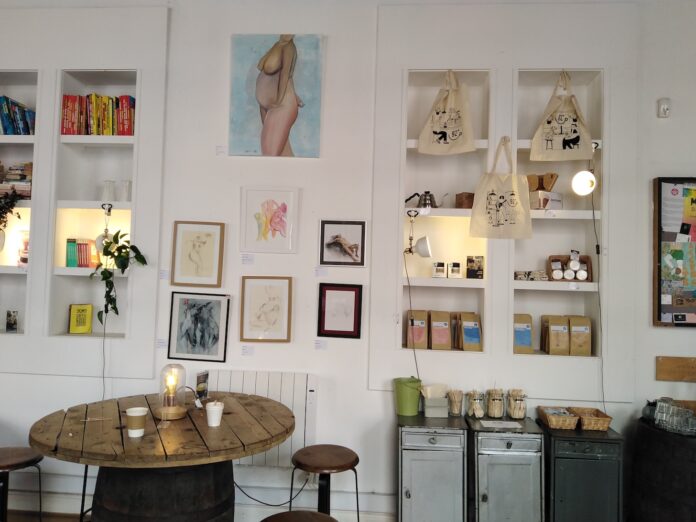 The privilege of drawing the human body from a live model is celebrated in this exhibition of works by Merseyside artists.  They are perpetuating an ancient tradition in which drawing from life was long considered to be essential training for any aspiring artist.  But as these works demonstrate, today’s life drawing practice has moved on from the historic aspiration to portray a classical ideal.  Here, the variety of styles and media convey each artist’s individual and personal response to the human form; they, and the models, show there is an on-going, vibrant relationship with the life drawing tradition.

For such an exhibition to be held in a café rather than a gallery illustrates a widespread acceptance of the artistic nude that would not have been countenanced in earlier times.  That said, the organiser, Paul Gatenby, said he was surprised that some people thought it was a bold move to have the word “nude” in the title, as if it would attract salacious viewing.

There are about 50 paintings and drawings in this show, which combine to emanate a commanding, yet tranquil, presence in the café – conveying something of the intense concentration that would have permeated the studios where they were created.  This is not a selected exhibition; all entries are included.  But this has not resulted in a lowering of standard.  Far from it.  The works all have an integrity that comes from real and truthful looking, ranging from delicate watercolours to impasto oil paintings.  There are also some beautifully observed pencil studies as well as excellent, powerful charcoal sketches.

If proof were needed that figurative work still has resonance in contemporary art, it also comes from painters such as Chantal Joffe and Jenny Saville – the latter says she paints flesh because she is human, that it is the most beautiful thing to paint. The sculptor Henry Moore drew from life throughout his long career and believed it was a way to understand the human condition: ““You can’t understand life drawing without being emotionally involved … it really is a deep, long struggle to understand oneself”.

The criteria for inclusion in this show was that all the works were done live at one of Merseyside’s art groups.  But of course such sessions haven’t been possible during the long (and on-going!) lockdown months, so there has been a boom in online life drawing sessions.  The organisers of these recognised that artists would be pining for some way of maintaining their connection with the human figure.  But it was also a recognition that there was a much wider audience, people who suddenly had more time and who would benefit from what artists have long-known – namely, that the intense focus required when life drawing is a form of creative meditation.

Almost all the works here are of female bodies.  Why is there such a noticeable dearth of male models?  Come on men.  Step up.  Give women artists a chance to reverse the ubiquitous art historical male gaze.

A final observation … as is so often the case in Liverpool, the building where this show is being held is worth a visit in its own right.  The exterior of this Portland stone building, dating from the 1930’s and once part of the School for the Blind, features a row of bas-relief sculptures.  These were designed by John Skeaping, Barbara Hepworth’s first husband, and a leading figure of modern British sculpture and painting in the mid-20th century.  The bas-reliefs depict the trades taught at the school: brush-making, Braille, basket weaving, piano tuning, and knitting.

If you’re inspired by this exhibition to model, to attend life drawing sessions, or to exhibit in future shows, contact Paul Gatenby, 07952461209, pg.sculpture@yahoo.co.uk  There were so many entries to this one that it has been extended to allow unseen works to be displayed.  All are for sale.