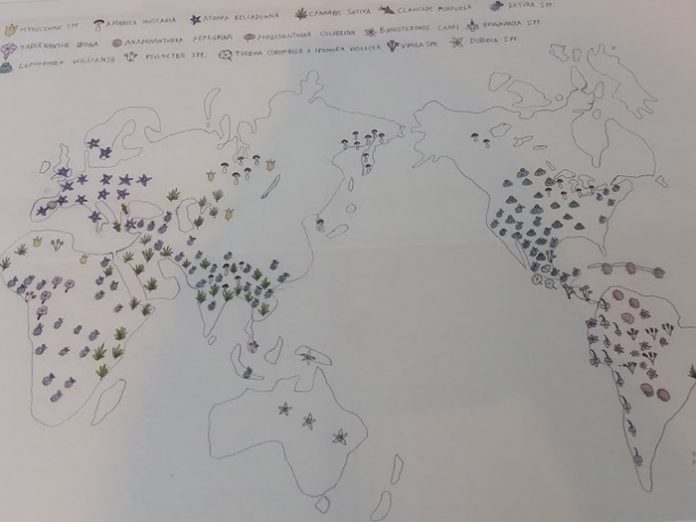 Where do we draw the line between reality and ‘other’? This is the question being asked in the John Lennon Art & Design building, in an unusual show, as part of the Software episode. Software plays an increasing role in our lives, but the line between lived reality and that presented to us by lines of code is increasingly difficult to define. The character Hillel Fischer Traumberg, whom this show is based around, has got lost in the definition.

The narrative Treister has created here is of Traumberg as a banker driven to the edge of sanity by the rapid algorithms of high-frequency trading.  He begins experimenting with psychoactive plants, and from there believes there are links between the plants and FTSE Global 500 companies. The works here all demonstrate the links Traumberg has ‘discovered’ by using Gematria charts – translating the names of plants into Hebrew, assigning each letter a number, and corresponding the numbers to the positions of companies in the rich lists.

Many of Traumberg’s artworks – detailed diagrams, watercolours of psychedelic visions, bright posters – are attractive enough to look at too. The story goes that his ‘outsider artist’ career is built on his work being popular with oligarchs and bankers, and you can imagine these audiences buying into the idea of their financial worth having a deeper connection to meaning and consciousness.

If you’re thinking that this all sounds a bit crazy, that’s because it is. However pretty each piece is, it’s ultimately meaningless on its own. The idea comes across from the start as a conspiracy theory, and each piece of the narrative only confirms the suspicion that this is all the work of an obsessive mind. But this is, of course, just a further layer of un-reality that Suzanne Triester has chosen to create by filtering the work through a character.

The links between the psychoactive drugs and corporate world may not be initially obvious, but this show draws interesting parallels. Photographs of the City of London in a highly psychedelic palette confirm that the City is a centre of madness. Its existence is based on control of prices and future behaviours – ultimately abstract, unpredictable concepts. Likewise, shamanism and hallucinogens are practices used to gain insight into a ‘bigger picture’.

Traumberg is leading us into a world where the need for these connections, usually only dabbled in if explored at all, is all-consuming.  But to what purpose? The Software episode is partially an exploration of how “one thing affects another without practical outcome”. Suzanne Treister’s show makes us think about whether this model is all that modern capitalism is – a world based on a deranged idea.