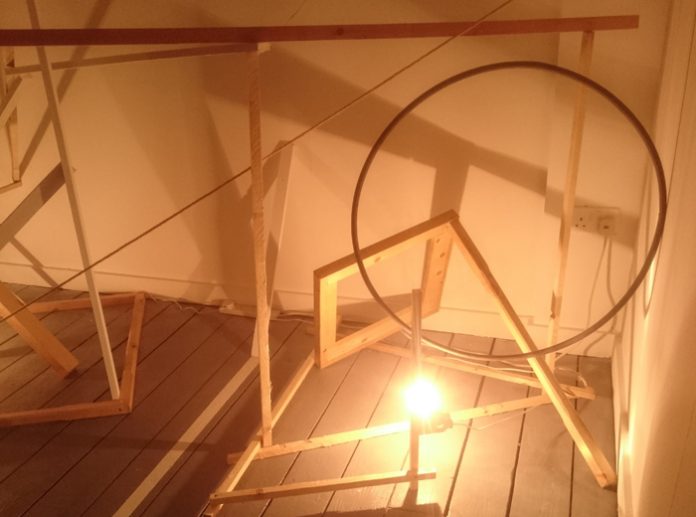 Review: Stephanie Miello, Depending on What’s There
Arena Studios,
August 2016

As hordes of new students pour into their new Fine Art studios for the first time, Art in Liverpool takes a look back at one of Hope’s most successful Fine Art students of 2016, Stephanie Miello.

Stephanie Miello was nominated for Class of 2016, The Double Negative’s ones-to-watch exhibition for graduates in the North of England. The exhibition is currently showing at the University of Central Lancashire (UCLan) until 29th September 2016. The artist, who graduated from Hope earlier this year also won a residency and exhibition opportunity with Arena Studios.

The solo exhibition she put together at Arena was an evolution of her installation at Hope, and allowed the artist to develop her practice in an established studio community, and showcase the products of her development.

As a Fine Art student at Liverpool Hope University she won the confidence of her tutors to the point that she was awarded with the biggest exhibition space of any graduating artist that year. She overtook most of one gallery space at the final show, and the confidence her tutors had in her paid off, as she walked away with two much coveted awards.

Her work is probably best described as installation, on the face of it, but only because it has to respond to its surroundings in order to function. In reality these installations are much more of an idea than an object. They present objects and space in a new way, and allow lighting to overtake the importance of the physical components.

For anyone familiar with Arena’s gallery space, the importance of lighting is one that can’t easily be dismissed. It is one of Liverpool’s smallest galleries, with extended corridors, and fascinating nooks and crannies – a space not easily passed up by any artist looking for somewhere a little different. Miello’s angling of shadow and light in her sculptural installation made the space feel ten times bigger.

Impressive, given that she’d actually reduced the floor space by half to do it.

In fact, this recent graduate describes her installations as “using delicate and ephemeral materials such as light, shadows, string, wood and glue to emphasise the spatial qualities of a single line”.

So, new students, wandering through the doors of your new studios, sitting at your desks for the first time, and asking, ‘what are we expected to achieve from this course?’ You’re expected to see things a little differently than you did when you started, and have the drive to see your ideas manifest. And you don’t need to look any further than last year’s catalogues for examples of that idea in practice.