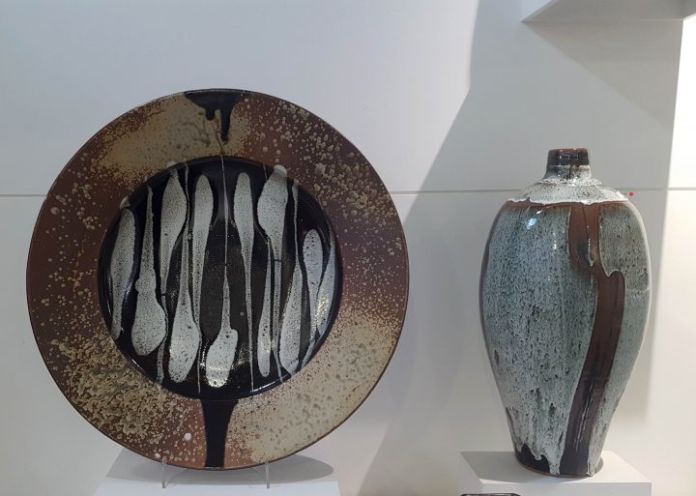 Stalwarts presents work by a selection of master ceramicists, all of whom have a long-standing relationship with the Bluecoat Display Centre. The artists – David & Margaret Frith, Gabriele Koch, John Leach, Emily Myers, Duncan Ross, and John Ward – are leaders in their field, with work in public collections nationwide. This exhibition presents a unique opportunity to view their work simultaneously, at this pivotal location.

John Leach’s black mood bowl and vase are more than the title suggests, and more than photographs can do justice. In reality the black is combined with shades of grey, and subtle hints of cream and blue. The colour mimics the curves of the vessels, enhancing their form.

It isn’t unusual for ceramicists to use shape, line, and colour to enhance the form of their pieces. Just as Leach has, Gabriel Koch and John Ward have done something similar. Koch’s simplistic hand built vessels lack the smooth polished outcome often expected of ceramics. Instead the surface has been burnished, or polished with a small object, a rock or bone for example. The burnishing and smoke firing processes left behind colours that complement each other, and distinct lines.

Ward’s pieces stand out because they appear to be at odds with one another. One appears to be reminiscent of 60s Op Art, and serves as a ceramic perspective on optical illusion in art. Whereas the other belongs to a different time altogether. The partially burnished exterior combined with the earthy tones, gives the impression of aged pottery. It certainly wouldn’t look amiss amongst the pre-glazed pottery of Cyprus or Egypt. Together they summarise the breadth of Ward’s practice.

Similar to Ward, Duncan Ross’ layered vases hark back to the pre-glazed era of ceramics, through colour and form. However, the suggested movement is contemporary practice at its finest. Ross’ layers are created using slip and inlay decoration, to create dynamic pots reminiscent of a Kandinsky painting. The shapes appear to dance in them both, creating movement in a stationary object. Another pot utilises clean, straight lines and a minimal aesthetic. However, this is somewhat dulled by the speckled shades of brown, orange and black.

This exhibition is a celebration of accomplished ceramicists, however, Emily Myers’ work wouldn’t look amiss amongst the graduate work at New Designers for example. Her curved forms have been beautifully carved into, creating ridges and revealing shades of turquoise. The precision executed by Myer’s demonstrates the meticulous process of ceramics, and by extension most arts practice.

Duo, David and Margaret Frith have been working together for more than fifty years, making domestic vessels that complement each other but are different to one another. They are representative of the traditional distinction between masculine and feminine art production, but in this instance they co-exist peacefully. The Frith’s collection contains a range of vessels, with both angular and curved forms. Despite their differences, the heavy glazes bind them all together. The painterly marks and splashes are consciously less contained and more expressive than other work in the exhibition. In some ways they mimic the gradual erosion of metals, both are quite organic in their appearance.

Littered around the vessels are various images showcasing the Bluecoat Display Centre as it once was. These archival images combined with work by artists who have exhibited at the gallery over a number of years, creates the perfect atmosphere for reminiscing.