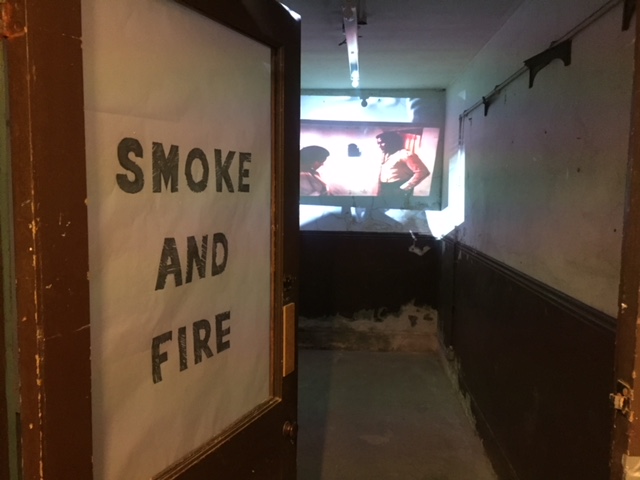 Smoke and Fire
at the Bridewell, Prescot St. until 14th October 2018

Six artists have created a multi-disciplined show on the theme of ‘Smoke and Fire’ using various spaces within this historic building. The title was triggered by a house fire experienced by two of the exhibiting artists. It explores personal experiences, folklore, popular culture and primal urges through painting, sculpture and site specific installations.

The main gallery is dimly lit at one end, brighter at other. A clay chimney sits in the gloom with a small round cloud suspended above it. There is a glow from within but no heat. The scale is unconfirmed. Are we viewing a large object from a distance? As we know, clouds are fairly large and the chimney dwarfs it. This would make the surrounding gallery a proportionally huge voluminous space. Or is the size it looks in reality? This could make the cloud a tiny magical creation part way through a conjured water cycle waiting for wind to gently position its sooty contents over lines of drying white washing.

The rest of the gallery is filled with paintings, video, a light box and a strange blue flame mask which manages to be quite cute and Smurflike on the one hand and terrifyingly on the other to some kind of blue supremacy. It cleverly conveys the duality of our relationship with fire as being both a comfort and a danger.

In the basement is a claustrophobic room in which simultaneous videos are shown on the theme of smoke and fire. Plucked from pop culture through the ages from The Wizard of Oz to the Crazy World of Arthur Brown the sounds and images lick the wall like flames reaching out towards the viewer.

The third part of the show takes place in the cells of the old police station. Burning Well a docu-vid on a small screen documents a strange bubbling well where the water in the ensuing brook can be ignited like brandy at Christmas even though water is still cold to the touch. The breezy reed-scape is reminiscent of the terrifying classic Onibaba a Japanese horror film from the 1960s and a full moon adds to the feeling that the Burning Well is a portal to an older time of mystery and magic.

Finally in a cell stands two pairs of footwear, one male, one female. From them protrude what looks like stumps of charred leg bones. Called Brief Encounters it is a metaphorical remnant of past relationships. The surrounding soot is made of memory. Love and passion, hurt and anger or maybe just indifference. It reminds us that we will all become fading memories as we turn to dust.

On a lighter note, you only have until the 14th of October to catch this exhibition so be quick.

Smoke and Fire, Bridewell Studios, Prescot St opposite the Royal Hospital. Every day except Monday 11am-4pm 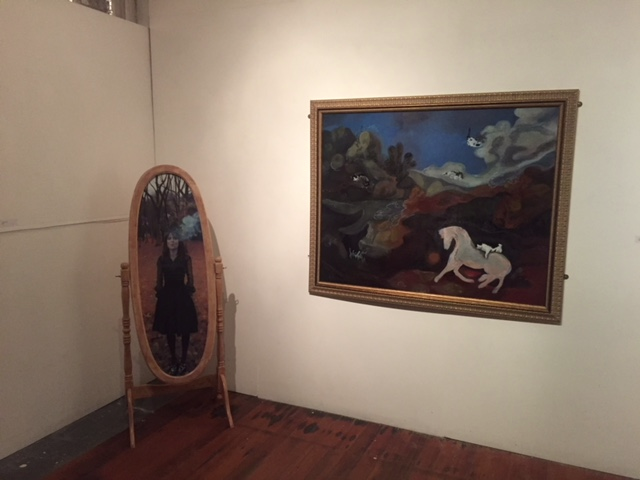