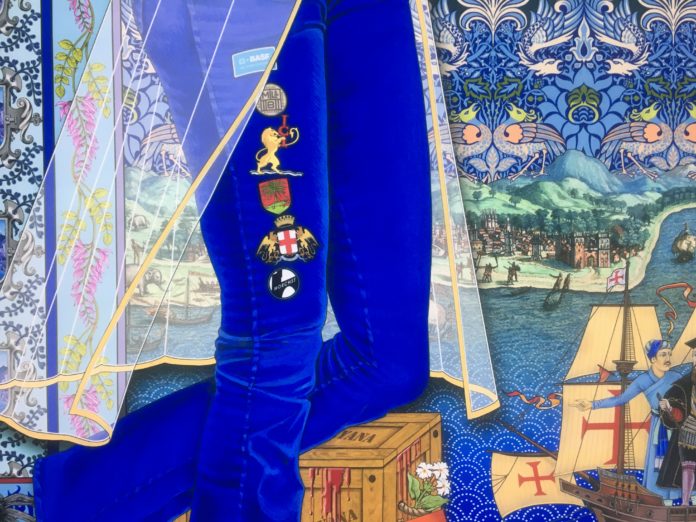 Slaves Of Fashion: New Works by The Singh Twins
at Walker Art Gallery, until 20 May 2018

‘Slaves of Fashion; is an exhibition of 20 new works by sisters, Amrit and Rabindra Singh, otherwise known as The Singh Twins. Focusing on the relationship between Britain and India, it poses both historical and current questions about ethical trade, responsible consumerism and the relationship between the Singh Twins’ country of heritage India, and their country of birth, the UK.

The sisters open a very interesting debate. It’s a debate which has threaded through their lives and is as interwoven and as complicated as the Indian miniaturist painting they are renowned for. The series includes 11 digital fabric artworks displayed on lightboxes, with each one highlighting a different theme relating to India’s textile industry. It also brings to light nine paper artworks that aim to explore the relationship between trade, conflict and consumerism from the age of Empire and its current cultural connections to our modern day.

The famous postcolonial academic Edward Said, put forward the notion of the orient as ‘other’ and how us, in the western world exists solely within the confines of our own culturally-determined, biased. Never is this more true when you look at the trajectory of the Singh Twins’ life, work and where they are today. The have faced a career of prejudice, beginning when studying for their degree at the University College of Chester. An external examiner refused to mark their final paper because their final dissertation topic was deemed to have no place in the arena of modern contemporary artistic expression. ‘Give them a 2:2 because they will go off and get married anyway’ was, they say, the view at the time.

Thankfully, the Singh Twins relied upon their own moral and ethical compass to challenge these misogynistic notions. They fought their corner and publicly won. It’s also currently timely that it is 100 years since women officially received the vote. But, bringing this to the fore in their in-house documentary highlights the prejudices that until relatively recently women did and indeed do in some contexts still face.

The combined talent of the Singh Twins far exceeds much of the tall poppy syndrome we have out there currently that gets all the artistic exposure. In comparison and despite their accolades and awards they still have always remained relative outsiders. This may be because their work might not be to everyone’s tastes as it is symbolic of a culture that remains alien and unexplored to us because of our own culturally conditioned perspectives.

The amount of work and intricate detail that goes into their collaborative and singular pieces in order to ask the question; ‘How Ethical is the Modern World?’ is no short of phenomenal. Whether it is the choice and use of colour, which is sublime, or the amount of academic research that goes into the composition. The Singh Twins are academic artists. They are not painting on a superficial whim, but are painting on the back of in-depth research, knowledge and an objective, informed, educated and reasoned delivery of Indian and British cultural and economic history.

Their sensitivity and unashamed femininity is juxtaposed against a sharply satirically political narrative that says it as it is. It places our past and present into a vividly astute context. We have touches of Gilbert and George, we have an stylistic homage to that other well-known Liverpool artist; Sir Peter Blake. However, most of all, the Singh Twins remain individuals who are successfully keeping alive a traditional Indian arts practice and moving it forward (they name their oeuvre past-modern, not post-modern).

The sisters have persevered with their artistic convictions to tell the colonial and postcolonial story from the perspective of the ‘other’ whilst having their feet firmly in the western camp. They do this with a level of objective politeness, not anger, or resentment of our selfish western ideals. The overall message we are given, is that they are attempting to fuse together the cultural borders that continue to divide and separate, by inviting us into learning about their language and heritage and its intrinsic relationship to our own.

By portraying these poignant stories through the medium of such skilful and beautiful works of art, these two artists deserve not only our acknowledgement, but also our upmost respect.