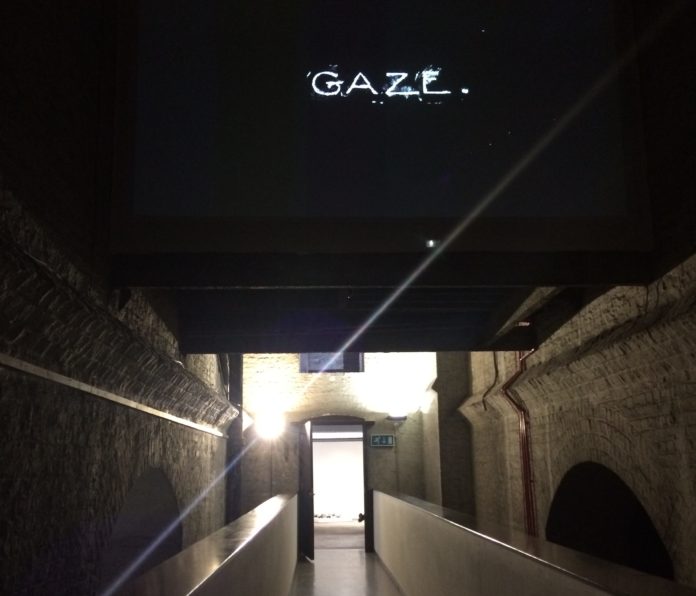 Weaving along the corridors and passages of the catacombs to get to the Bridge Gallery in St George’s Hall, I always feel like I am moving through time as well as space to arrive in a different world and always excited for what I might be met with when I get there.

Suspended from the ceiling at the beginning of the gangway that leads to the gallery is a video work by Laura Robertson. It is an animated text against a black background. The text, in fonts that resemble those carved onto stonework in St George’s Hall itself read, ‘give me this mantel of darkness, away from their mockery and fear, and may any man who seek me out, burning indomitable gaze’.

Robertson’s piece is a promising opening to Six Memos, the exhibition curated by Branka Benčić, and part of the CreArt network of European cities for artistic creation project. It establishes an immediate connection, between the work, its physical context and Calvino’s work.

Six Memos is a response to the ideas presented by Italian writer Italo Calvino in his text Six Memos for the Next Millennium. The six memos of the title are in fact five lectures Calvino was due to present for the Charles Eliot Norton Poetry Lectures series at Harvard University. Calvino died before he completed the sixth and so the essays were published posthumously in 1988. Each one, Lightness, Quickness, Exactitude, Visibility and Multiplicity is a reflection on a literary value which Calvino argued should continue into the following millennium.

Twenty artists from the 11 cities which make up the CreArt project were chosen from over 90 submissions in response to an open call to participate. Many of the works exhibited had been produced before submission. Six Memos then is a curatorial consideration of the values Calvino advocated within a literary-philosophical context, from the perspective of visual art, now that we inhabit the millennium of Calvino’s projection.

Tjaša Kalkan’s two photographs, Dialogues (no. 1 and 2) are a playful look at lightness. In front of a building shrouded in red and white striped scaffold sheeting, a female figure lies on top of a piece of street furniture whilst a woman holding onto the handle of a shopping trolley looks on at her. Another photograph presents a lone male figure lying prone on the floor of a waiting area, elbows on the floor, with his head resting on his hands watching the row of people at the counters in front of him. Behind him are rows of people seated, waiting their turn at a row of counters at the other side of the empty space. His solitary presence on the floor occupies the space and the centre of the photograph. Kalkan’s study of the individual and their relationship to the world they inhabit is a stark contrast to the tension in Zlatko Kolpjar’s video installation, K17, in the next room.

In K17, Kopljar, dressed in a white luminescent suit walks across a railway bridge. The camera shakes as trains roll under the bridge, causing him to appear ghostly. In another scene, he stands unmoving on a busy city pavement, his gaze holds unswervingly at the camera as a tide of humanity wash past him, bemused, impassive, irritated. The scenes shift between above and below ground, between the presence and absence of Kopljar until the final scene in which a line of people stand in the darkness, a length of yellow rope between their teeth, linking them together.

Six Memos is shaped by the themes and values presented in Calvino’s essays. It presents artists’ reflections on landscape, changing nature, human condition, relations between subjects and objects, artistic production itself, materiality, identity and memory. It attempts to cover a lot of territory and lacks a narrative thread to weave ideas together and so it feels disjointed at times. It asks the viewer to make big leaps but doesn’t create the physical space for each work to breathe and to reveal itself.

For me the most exciting work in Six Memo’s was Robertson’s. Her work isn’t just a direct response to Calvino’s text, it is a reflection on the act of writing of itself, of communicating ideas and creates a conversation between Calvino’s ideas and the physical location of the work.