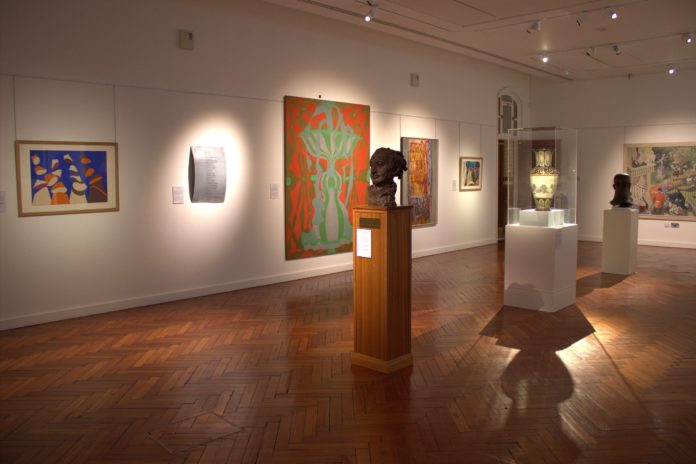 In the short time I have been living in Merseyside, I have already established a routine of popping into the Victoria Gallery & Museum whenever I am in Liverpool city centre. The reason for my visits is to spend a few minutes with Elisabeth Frink’s potent sculpture, Gogglehead 1967.

It is usually located on the first floor landing – not an ideal position because one can’t walk around it to see it from all angles, but great that it is always on show.

However, this time the Gogglehead was not in its usual location … momentary disappointment evaporated when I realised that, of course, it would form part of the exhibition I had come to see. And there it was, in the middle of the main gallery space so that, for the first time, it was possible to see the back of his head.

Frink said that the Gogglehead series became a symbol of evil to her. This is intriguing and why I like coming back to this sculpture because to me he looks vulnerable, another way in which Frink often portrayed men. The goggles do prevent eye contact and therefore confer an advantage over the viewer but instead of being sinister black, the goggles are polished to gold. This has the effect of softening this fiercely male head and leaving it rather exposed.

Many contemporary artists might take issue with the segregation implicit in the title of this show, but one of the 35 here is Susan Hiller and she had no problem with being categorised as a ‘woman artist’. She evidences this in a quote from The Guardian’s obituary of her (she died on 29 January this year): “To be a woman and an artist is a privileged position, not a negative one. When I speak of being a woman artist, I’m suggesting a position of marginality is privileged. If you are marginal, you know two languages, not just one. And you can translate and bring into language insights that have been previously unarticulated. So I consider, like being a foreigner, being a woman is a great advantage.”

Hiller is one of several world-famous artists on show – others include Bridget Riley, Gillian Ayres and Fiona Banner. Sharing the space with them are artists who are less known, some who were lauded in their time and quite a few with a direct connection to Liverpool. The gallery notes are brief but spark interest, and further research into these women’s lives reveals extraordinary stories of achievement outside of their art practice as well as through it – Hilda Watts Bernstein, for example, campaigned against apartheid in South Africa and was awarded for her work on gender equality and democratic freedom; and Elisabeth Vellacott who kept painting through hard times to have her first solo show in her 60’s and was still producing work into her 90’s, when she finally received acclaim. There is an etching of her in the show by Liverpool-born Evelyn Gibbs, who herself inspires admiration for all she achieved and campaigned for: painter, printmaker, portraitist, war artist, illustrator of children’s books and pioneer art educationist.

The Curator of the Exhibition, Dr Amanda Draper, explains that she was keen to reveal the interesting lives behind these women artists, as well as showcasing their work.

Another impetus behind it was to pay homage to the late Linda Nochlin, whose 1971 essay Why Have There Been No Great Women Artists? triggered a reappraisal of the male-dominated art world. Even so, there is still disparity; the VGM, for example, has 3,750 works in its collection but only just over 200 of them are by women. Dr Draper says that this representation, around 5.5 percent is quite a good average for a public institution.

The piece by Banner is Runway Show, 2017, which is visually compelling in its melding of materials – Letraset on a piece of aircraft fuselage. Anyone familiar with Banner’s work will know that this combines two of the elements most identified with her practice. It also packs her customary punch, this time with the poem it carries – a scathing commentary on the fashion industry’s use of very young and vulnerable catwalk models – thus making a play on the word ‘runway’.

On the opposite wall is a huge, abstract oil painting on canvas, which Dr Draper tells me has not been exhibited since the early 1990’s. Having retrieved it from the Gallery’s store and removed the swathes of plastic, Dr Draper was delighted to find it in good condition.

She had to do some detective work to locate the artist, Dr Peggy Postma, who revealed that she had side-stepped her artistic practice to retrain as a Clinical Psychologist. She added that her art hasn’t been completely left behind, that the two careers are inextricably linked because her creative way of thinking makes for a valuable tool in her clinical field. Dr Draper’s wall note on her states that horses influenced her paintings. I was pleased to read this because the painting had echoes of the superb sculpture on another of the Gallery’s first floor landings – Horse IV by William Tucker.

One of the rewards of going to wide-ranging exhibitions such as this is coming upon artists for the first time. So it was for me with Mitzi Solomon Cunliffe, whose striking inter-weaving tubular sculpture, Loose Strife (1951), is shown in the main gallery.

Internationally, she is most famous for being the sculptor who designed the golden BAFTA Award trophy in the shape of a theatrical mask.

Liverpool is fortunate to have examples of her work permanently on view at the University’s School of Civic Design. There, the carved handles on the main entrance door are hers, as is the sculpture in a small courtyard at the rear of the building. It is called The Quickening (1951) and is a most tender rendition of a hand protectively holding a dove. The sculpture, carved from a single piece of white Spanish marble, is all sensuous curves and rounds, perhaps reflecting the title, which is a term most often used to describe the first foetal movements a pregnant woman feels. This feeling is also sometimes called “a fluttering”, which anyone who has held a small bird will know.

It struck me again when viewing this exhibition how easy it is to take for granted that national museums and galleries would always be able to acquire artworks for everyone’s enjoyment. But these days the commodification of art means an increasing number of works end up in private collections and once this happens there is the danger that they will never be seen in public again, except when they come up for auction to be sold at an even higher price.

Of course there is the argument that public galleries are also guilty of acquiring works that then hardly ever see the light of day but at least there is the possibility of them being shown – as in this exhibition where some of the works had not been on display for many years.

The piece by Banner is the gallery’s latest major acquisition. Dr Draper explains that it was added to the collection last year (2018) with the support of the London-based Contemporary Art Society. A charity to which art institutions pay an annual fee and in return the Society purchases important works of art to be placed in public collections. Dr Draper says that in her opinion public institutions would find it difficult to continue acquiring new contemporary works without the help of the CAS.

This really is an eclectic exhibition, as its title proclaims, and as such it will appeal to a wide range of tastes. I’ve been to see it on several occasions and each time it has surprised me with a detail I hadn’t registered before. It is well worth a visit, not least because you never know how long you might have to wait before some of the works are shown again. 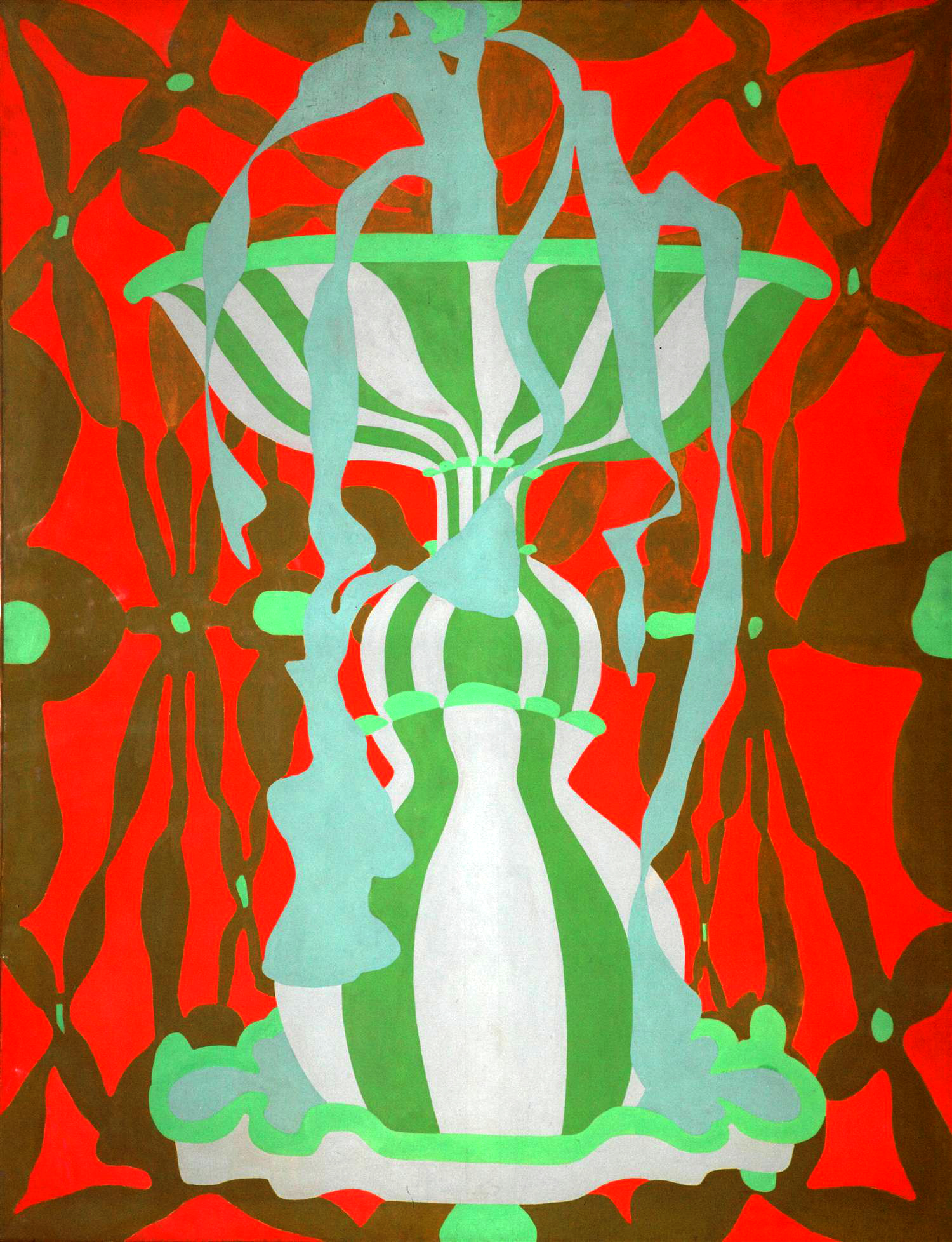