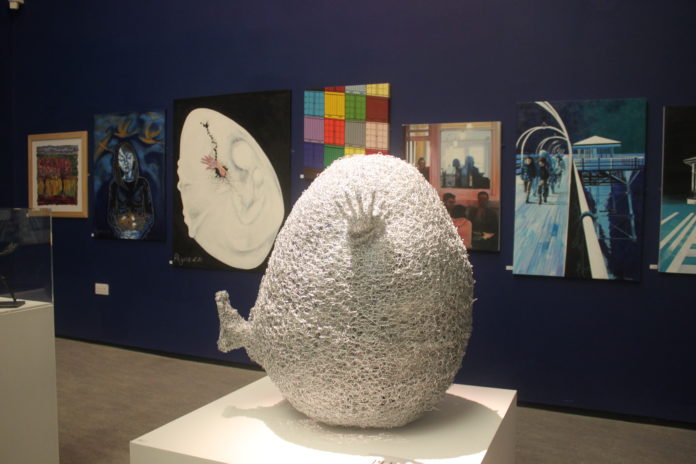 The Sefton Open 2018 proves once again that artistic talent in Merseyside is not only alive and kicking, but also thriving.  This exhibition is founded on the relationship between The Atkinson and the Southport Palette Club.  Established in 1921, the Palette Club initiated and nurtured the concept of an annual exhibition, the fruits of which are evidenced in what you see today nearly a century on.

The premise of this relationship is also reflected in the allocation of gallery space to local art groups.  There are no less than fifteen of these groups participating, such as Churchtown Art Club, Moor Lane Art Group in Crosby and Sefton Carers Centre Art Group in Waterloo, all with their own unique stories to tell about how they were formed and what they are about.  Membership is comprised of well-known local artists and enthusiastic amateurs, and they are also showcased in the accompanying catalogue which can be purchased for £2 at the gallery entrance on the first floor.

There are 643 works spread over four gallery rooms, the landing and the Art Box, so it would be wise to allocate yourself enough time to get a good look at everything.  This exhibition deserves it.  Prices range from £12 to £3,500 (103 works are Not For Sale) and the Own Art scheme on offer lets you pay for your artwork in ten monthly instalments with an interest free loan if your taste doesn’t quite match your bank balance.

Perhaps, because of the connection to local art groups, ‘local knowledge’ is a recurring theme in this Open.  Some works embrace this wholeheartedly, such as the oil painting Southport Beach by Angela Hargreaves, whilst others are subtle, like that of John Zehentner entitled The Modern Dance which depicts a ‘street scene’ that perhaps only locals would know is actually a street in Southport.  One work I found endearing is that of Formby Beach Chess Set by Mary Morgan which depicts chess pieces in ways synonymous with Formby, using red squirrels as pawns for example, and a race horse as the knight, presumably alluding to Red Rum.

For those familiar with The Atkinson’s permanent collection, its infamous nudes are echoed on the landing gallery with a variety of predominantly female figure studies in pastel, pencil and charcoal, catapulting you into the world of fine art.  The unidealized lines and shapes give a portrayal of the female form far more dynamic and interesting than the Victorian tradition of atypical perfection, such as portrayed by Venus in The Atkinson’s In the Venusberg (1901) by John Collier (1850-1934).  One work that particularly resonates with its powerful depiction of femininity is Unshod by Hamilton Tweedale, which can be found in Gallery 2.  This image shows a shaven-headed, naked young woman whose body seemingly possesses a vulnerability at odds with her feisty pose and facial expression.  It is a strong, bold representation of the female form and possibly the modern Venus – beautiful and real.

One of the rare qualities about an Open is that it gives a platform for non-professionals and professionals to be displayed side by side.  The Sefton Open evidently supports this relationship and, lest we forget, as the philosopher Ralph Waldo Emerson (1803-1882) once said, ‘every artist was first an amateur.’

For more information on the Sefton Open at The Atkinson contact: