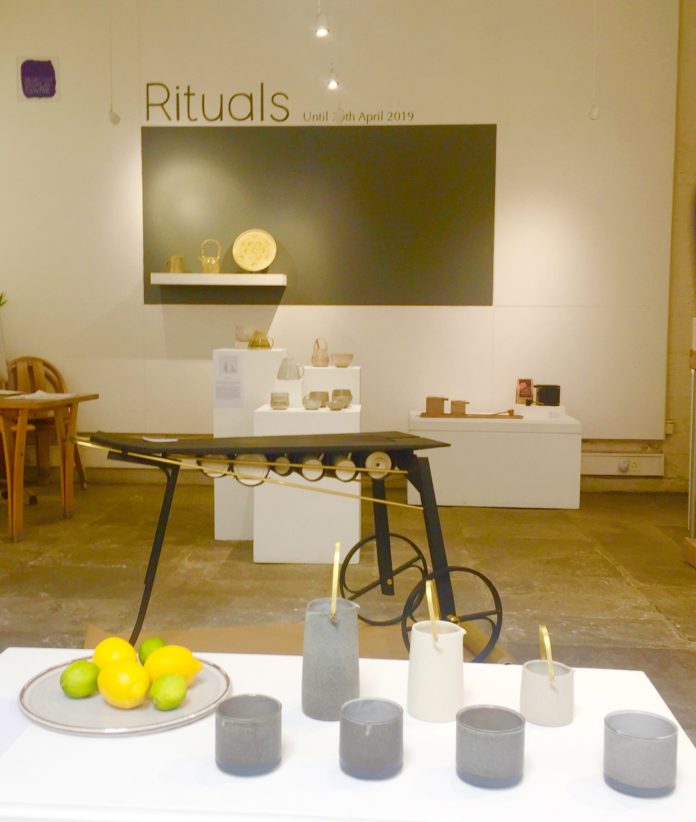 Bluecoat Display Centre is a base not only for artists but also collectives, small organisations and those working in craft. As such, showing in the display centre from now until April 20th 2019 is a mixed-media exhibition of artist crafts titled ‘Rituals’.

Nearly all the works sit mysteriously between being functional and abstract. Rachel Holian, one of the artists involved, is the creator of a series of miniature porcelain vessels and stamps. Despite their tiny size, they are clearly made with a high regard for craftsmanship and love that transfers easily from the small forms to the viewer peering at them, in the way that tiny things are often stared down upon.

Katie Haywood’s ceramics are smooth and mystical. Marble-like white forms that look like crowns, chains and sticks appear as powerful tools that could wield the elements or protect a soul encased in a tomb after death.

On a similar note, Anthony Wong has a collection of hand-crafted jewellery which is accompanied by a statement heralding the power of such personal trinkets to make one feel dressed, denouncing the feeling of nakedness that is felt when the jewellery is removed.

The chosen title for the arrangement of these different art and craft practices, Rituals, is beautifully apt. There is a sense of something nomadic, ancient and entwined with what it is to be human in the air.

Hugh Miller’s work echoes this, yet at the same time has a modern sensibility to it. Mostly formed of English elm and brass, an artist statement on display reads that the artist sees his works as ‘small pieces of architecture’. Whereas some of the works, adorned with teabags or small piles of sugar, bring to mind the ritualistic behaviours of making and drinking tea or cooking, Hugh Miller’s make you think more about direction and process – the predictability and reliability of following instruction.

Many of our daily actions, despite differences across people and their individual quirks, are akin to carrying out rituals. Simultaneously simple and complex, the peaceful sureness of the crafts at Bluecoat Display Centre certainly make me think of how honouring our own rituals, whatever form they take, is a therapeutic and important act. An act that can bring us moments of clarity, security and calmness.

The need for rituals that we perform in our day to day lives can give us back control in times of turbulence, or a feeling of preparation for whatever lies ahead.