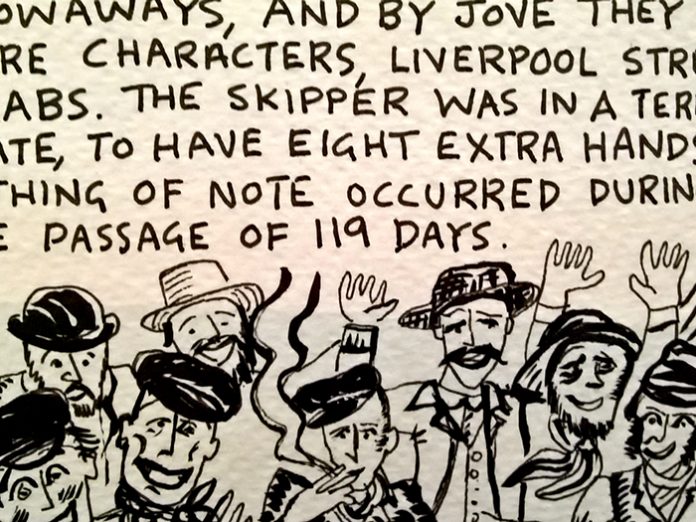 Throughout the Biennial this year, Road Studios have had the most regularly turned over exhibition series, including artists who are elsewhere engaged, tying in the Fringe and the Biennial Proper. Their exhibitions are quietly maintaining the pace of the Biennial, and making our website look more alive, with fortnightly openings for their blink-and-you’ll-miss-it shows by artists from all stages in their careers.

The current show, Remnants, featuring work by Chris Stokes, Mark Wigan and Sophia Kokkinis, has a focus on lost artefacts of time-travel. Whether that is through stories or reimagined histories, the work involved appears to have focused on creating skewed versions of events.

Kokkinis’ crocheted stuff, which hang from the ceiling as haunting rituals, can’t really be given a name but have all the language of cult relics. Her work is supposed to take us back to our pagan roots, but its contemporary feel, and fashionable materials manage more to highlight the rituals of modern life.

Her work stands out against the accidentally unified work of Wigan and Stokes though. Their work, which really, other than their starting point of ‘history’, has no particularly intended connection, works together well as a unit – though sitting at the writing table across from it, there is a clear visual lead from Kokkinis’ crafted vestments. Mark Wigan, and Chris Stokes’ work seem to have the same natural audience and almost tell similar stories.

Mark Wigan’s piece has a much more personal story to tell, than the comical representation of Chris Stokes. Wigan’s strip of Victorian history is actually based on Liverpool’s history as one of the biggest players in the docking industries. His sea faring tale is one I would have liked to have spent more time with, so I hope it pops up again somewhere.

So while that might visually pair with Chris Stokes’ work, their punch lines are clearly different. Stokes takes a direct approach to his own personal history, a subject he is obviously fairly familiar with, but forces its audience to shift their view point, in order to try to access his.

An exhibition that unfortunately ended last weekend but leads on to what promises to be an equally exciting Gender Dilemmas, by Road Studios resident, Amanda Marie Atkinson. The exhibition, which launches on the 26th, and runs until the 28th of August has a specific focus of Gender Dilemmas in Contemporary Nightlife.