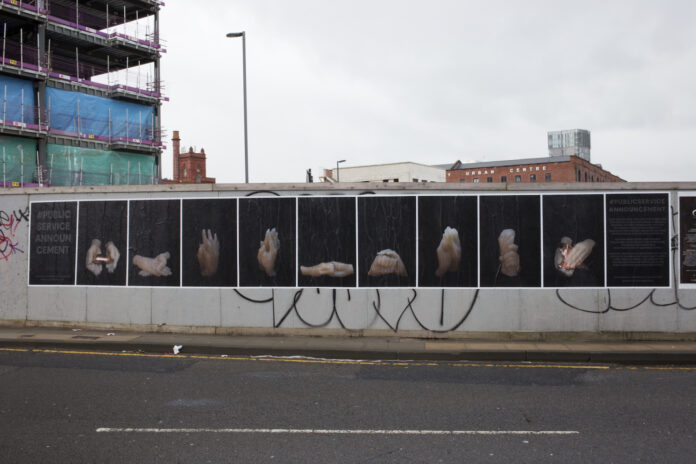 Most artists ask themselves the question “what do I want to make work about?” When Alex Stone was invited to take part in this year’s Threshold Festival, it was in the midst of the first lockdown and having asked herself that question, her response was to focus on an aspect of the pandemic to which everyone could relate – that of hand washing. More specifically she wanted to humanise what she describes as the “barking” tone of the government’s instructions and to dignify what we were all doing: “The hand washing we are all complying with has been transformed from a personal act into one for communal protection. I also wanted to make something that recognised how, for a lot of people, the solitary washing of their own hands was their only physical contact”.

Galleries were still closed during the Threshold Festival but Alex was determined that her piece would have an actual presence not just an online one. This meant adopting what she calls guerrilla tactics, in this case, a series of paste-ups of billboard size on building site hoardings: “The billboard idea came about because of how we are bombarded with adverts and in the pandemic it felt like a lot of the time we were being shouted at by officials. It was also important that the piece was out there in a public space where everybody could see it”.

I hadn’t known of her project when I came upon the billboards at the top of St James Street but the sequence of hands coming out of a black background were intriguing enough to want a closer look and to risk being run over by the incessant traffic. Up close, the hands revealed themselves to be cast in what resembled wax, holding what looked like a bar of gold soap and a gold towel. The overall effect was a narrative of a peaceful ritual, almost religious in tone, such that I didn’t make the connection with the sterile, fearful, official public announcements on hand washing – until the last segment of the paste-ups, which explained the source of the work.

Later, when speaking to Alex, she clarified what materials she had used and described the many, contortionist steps involved in casting her own hands in the nine different poses of the hand washing, all of it done in her own kitchen, one hand at a time, in pandemic isolation: “There was definitely a moment when I wished there were only five steps!” Even when she had finally created the moulds for making the casts, it still took some experimenting before she found the soap that would melt for pouring and then set; most ordinary soaps contain too many chemicals for this to happen to her satisfaction.

And of course soap had to be the casting material in a work about hand washing. She also took all the photographs for the artwork.

What had resembled gold leaf was in fact copper. Why copper? “Because I found during my research that it has anti-microbial properties”, explains Alex. This turns out to be something ancient civilisations knew about and was used in their health care. Today’s scientists are expanding the knowledge of what copper can do. Crucially, they have proved that it can destroy the Covid-19 virus within minutes, while it can remain infectious for five days on surfaces such as stainless steel or glass. This is clearly of immense importance in the global fight to contain and combat viruses and microbial diseases.

Part of the text on Alex’s “Public Service Announcement” gives an insight into what makes this artwork of particular relevance to Liverpool. It explains that just around the corner from where she has pasted her work is Upper Fredrick Street, the birthplace of the city’s first combined public baths and washhouse. This snippet of information prompts any curious viewer to explore further and it will lead them to Kitty Wilkinson, who became known as the “Saint of the Slums” for her work in combatting the Liverpool cholera epidemic of 1832. Then, as now, the importance of hygiene was key in helping stop the spread of disease.

A marble statue of Kitty can be seen in St George’s Hall, the work of London-based sculptor, Simon Smith. Kitty was the first woman to be represented in the Hall and the unveiling in 2012 was the first new statue to be placed there in more than a century.

Over in Everton, Kitty’s legacy is being continued in a social enterprise, appropriately named “Kitty’s Launderette”. It offers affordable, ecological laundry and dry cleaning services as well as being a hub for arts and social events. Liverpool artist, Grace Harrison, was one of the women behind the venture, which is run by a small team of local residents. Another Liverpool artist, Philip Garrett, has donated a sculpture of Kitty to the launderette. His art practice is rooted in celebrating historical Liverpool figures whom he believes deserve greater recognition.

One of the gambles of urban street art in any form is that it risks being taken down or painted over. An attempt has been made to whitewash over Alex’s billboards but the rivulets of dripping paint have literally added another layer to the work and, to my eye, increased its intrigue and potency – particularly where the hands are holding the glowing towel. It reminded me of a recent interview given by the artist, Yinka Shonibare, in which he said, “artists put something where there was nothing. It’s a form of alchemy. They produce gold out of thin air”.

Meanwhile, Alex has reconfigured the paste-ups as a single poster, which is now on view in bathrooms of four gallery spaces, one of them being Open Eye, the others in London. She feels this was a natural progression for the piece: “For these bathroom installations, I wanted the viewer to become central to the work as they enact the guidelines”. In her multi-faceted practice she endeavours to transform the dystopian into the aesthetic and precious; in this response to the pandemic she has certainly encompassed those aims.

Another aspect of her practice is to explore and question the parameters of exhibition space, so she’s really pleased that galleries have embraced the idea of having the poster in their toilets. Sorcha Boyle of Open Eye was keen for it to be displayed: “At a time when distance has become the norm, the material quality of this work brings attention to the physical interaction and tactile nature of the hand washing rituals that have become ingrained in our lives over the past year”.

The posters were sponsored by Brixton-based Photofusion and its Director, Kim Shaw, says Alex’s work was a standout project for them: “The past year has been a challenging one for artists, to say the least. For many, it was something like a creative wormhole, shifting everything about how they worked, where they worked and what they worked with. Understandably, some artists struggled, but others found something else in them – something new, something surprising. Alex’s “Public Service Announcement” project was one of those”.

During the pandemic we have all connected with our hands as perhaps never before; been reminded of the power of touch, especially in its absence. The disembodied hands in Alex’s work seemed to me to symbolise that aspect of the lockdowns, which meant we weren’t anchored in ourselves in the way we usually are, that we were cut off from so much of what makes up our lives. She hopes the piece gives people a chance to pause, to have a positive response to the hand washing ritual – in a way, to take back what our own hands mean to us.