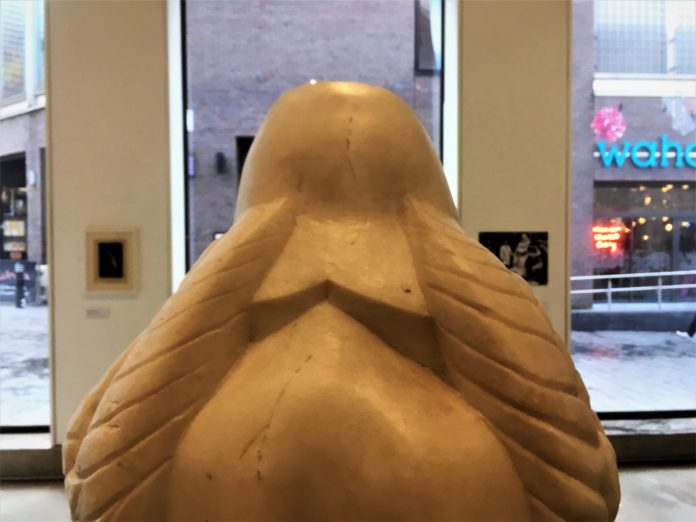 It might not have the impact it had 84 years ago, but staring out of the window of Bluecoat‘s new gallery is a piece of history that stirred up everything Liverpool understood about fine art. Genesis, by Jacob Epstein, wouldn’t look out of place anywhere today but the last time she visited Bluecoat it sparked outrage, humour, inspiration, but most importantly, massive queues.

The spectacle of art in the gallery, at least as far as Liverpool is concerned, owes a great deal to the bravery of the Sandon Society, the then leaders of the gallery. And its placement now, in Bluecoat’s new building, is thanks to the understanding and reflections of the now director Brian Biggs.

Installed in a space with every reason to flaunt its local influence, this gratuitous maternal image sit comfortably, as visitors look her up and down not knowing her place, and shoppers pass her by without a glance. But Genesis just stares out, happily indulged in how important she is to the history of this gallery and how critical she has been to the realisation of Bluecoat’s 300th year.

And isolating this as the culmination of Bluecoats 300th birthday is the poem given to the title. Mount Pleasant by William Roscoe, written in 1770, speaks of Bluecoat Chambers while it was a school. A busy society of young minds with one quiet space to reflect. The dome

can be seen today from either entrance, and back then was a refuge for children with nowhere else to go. A place that gave not just a roof, but an education, and a chance to grow. The big question now though, given all that Bluecoat has become, is whether there is a difference in its value from its original purpose. The Bluecoat I know is one of peace, refuge and education. That’s what makes it different I suppose, what makes it work today, the same structure that stood up centuries ago serving the same purpose today, just through a different medium; instead of school its art; in place of classrooms, galleries; in place of teachers, artists.

And so Genesis sits on her stone plinth watching new faces pass by, still under the same roof, still serving the same purpose, but instead of building a reputation through laughter and disgust, she sits in receipt of admiration.

In The Peaceful Dome continues until 8th April 2018 at Bluecoat.