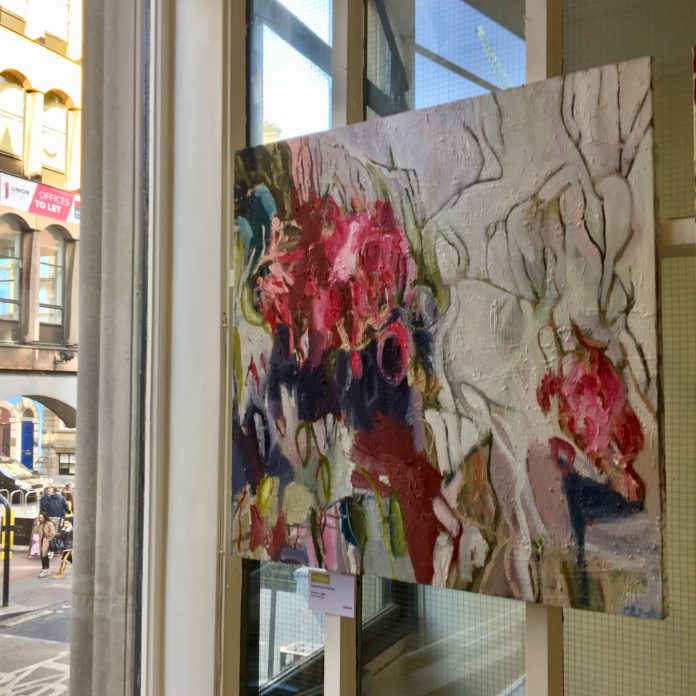 It is on an unusually bright and sunny February morning that I decide to venture on the short walk from my apartment to Cook Street in Liverpool city centre where, nestled on the second floor between The William Gladstone, a typically British pub and the Italian restaurant Piccolino, is Editions Ltd which currently hosts Painting Nature, an exhibition by Elaine Preece Stanley.

Cook Street embraces an eclectic mix of memorabilia shops, bars and live music venues. The Beatles and their numerous album covers are printed onto an array of mugs, posters and vinyl CD’s. Liverpool FC scarves sway on outdoor display stands next to street performers and buskers. A Bridget Riley-esque striped building is visible in the distance where a large tree is adorned with many small, red Chinese lanterns. Newsagents, jewellers, betting shops and tapas bars jostle alongside each-other, unrelated in purpose but mutually charming in their participation of the scene before me. All who share this space, including myself, are part of this moment in time in Liverpool.

Elaine Preece Stanley studied and gained a BA Honors degree at Liverpool Hope University in 1999. Going on to exhibit in Liverpool and Cheshire galleries, her career as an artist took an unexpected turn in early 2009 to 2010 when her daughter started to receive treatment for Leukemia, forcing Elaine’s work to a standstill whilst she began caring for her daughter fulltime.

Despite life’s way of putting obstacles before us, Elaine was included in the ‘Best Emerging Artist’ national competition in 2012 and the year after was elected a member of The Royal Cambrian Academy in Conwy, Wales.

Then in 2016, Elaine was diagnosed with Retinitis Pigmentosa.

Due to the rare condition Elaine has started to rapidly lose her sight in her peripheral vision. It largely affects her approach to painting, both compositionally and through her choice of palette, with the artist often preferring to paint on green hued backgrounds which allow her to see colours imposed on top more clearly. Elaine also finds herself having to physically move away from and then back towards her canvases whilst working – a process which allows her to make sense of the image she is building.

Learning this before I began my walk through the exhibition, I was humbled and in awe of Elaine’s courage and commitment to her practice. How many of us, faced with such adversity, would be pushed towards throwing the towel in?

As I first come into view of thick, impasto marks on canvas I immediately think of the energy and direction of Frank Auerbach. The rich fleshiness of one particular painting brings to mind the vigour of contemporary female artists like Cecily Brown or Dana Schutz.

The jabs of paint in ‘Autumn Arrives’ sing of Seurrat, whose charming rendering of relaxed onlookers shaded by trees on the sun soaked banks of the river Seine in his famous piece ‘A Sunday Afternoon’ emanates the same appreciation for nature that is clearly palpable in Elaine’s work. An intense need to portray a deep gratitude felt for the natural world is shared by many creatives (writers, poets, film-makers and artists alike) and it is as evident in Elaine Preece Stanley’s paintings as it is in Monet’s plein air perceptions.

‘Cherry Blossom’ and ‘Entwined’ bespeak the long, tangled limbs of organic vegetation left to grow unattended. The use of pale pinks and mauves against dark greens recall the beauty of such eventualities. The same painterly techniques in ‘Fenced In’ feel similarly melancholic, both by the title and range of pigments.

‘House on the Hill’ and ‘Spring Park and Garden’ remind me of my own blurred childhood memories. Luscious landscapes of grassy fields are tugged and stretched by means of oil paint into the borders of non-representation, yet they retain their essence. In ‘Autumn Light’ we are led down a shadowy path out of a thick forest, towards the summer’s radiance. The peculiar nostalgia of a reflection of pale blue sky in the waters of ‘Calderstone Pond’ tugs at my heartstrings, stirring up memories from when I too have been in an instance like this.

Here, I think over Elaine’s sources of inspiration; her long dog walks in the countryside and local parks of North Wales, Cornwall and Liverpool in summer, winter and autumn. I reflect on how many of us share a need to be a part of these kinds of places – to drink in and absorb any moments of freedom we can get a hold on. Forgetting who we are and becoming nothingness, attempting only to commit to memory every sight, sound and smell on offer. For those of us who are prone to forgetting, there is the gift of artists who are willing to do whatever it takes to recreate these experiences for us – artists like Elaine Preece Stanley.