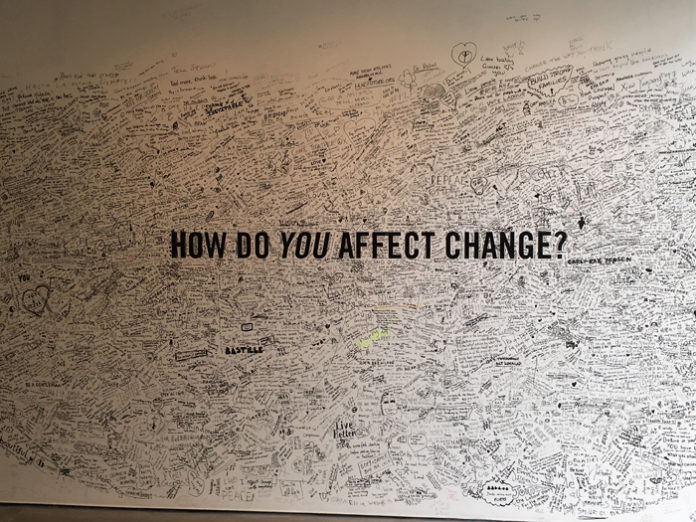 In a city known for its independence and standing up for everyone regardless of gender, sexuality or ability to do something, it only made sense that it was Liverpool’s rising photographers capturing what our community is doing towards societal change.

Open Eye Gallery‘s Affecting Change exhibition is in to its last weekend, it showcases five local photographers working with various collectives across the city and even presents the opportunity for everyone to get involved with its very impressive How Do You Affect Change wall encouraging the consumer to write down what they can do to make a change, a perfect example of freedom of speech and living in an open society. This wall shows how much change is needed in society; a reminder why the Affecting Change exhibition is so important.

Yetunde Adebiyi and Between the Borders, a group that publish a magazine dedicated to helping refugees and clarifying the asylum process, have come together to produce a set of images showing a direct action at Yarl’s Wood immigration removal centre. Alongside the exhibition was a copy of Between the Borders, a publication which includes poetry, essays and art from both UK citizens and those going through the asylum proccess.

Matty Lambert worked with the UTS Foundation and captured the work UTS Foundation does in the Wirral focusing on coaching, health and wellbeing sessions to vulnerable communities and a big focus on post cancer care. What captured my attention in the images is how much those participating seemed to be enjoying themselves. He really captured the happiness that goes with inclusion and being a part of something.

Going into the next part of the gallery a sign caught my attention saying “no one is illegal”. Quite a broad statement and one which really sums up the exhibition; The idea that no one should be excluded; That we are all human and deserve to be represented, respected and treated as such.

Libbi Groves, a student living with cerebral palsy, chose to work along Wirral based charity Stick ‘n’ Step to capture the work the charity does with children living with cerebral palsy, encouraging them to be more independent, confident and mobile. One thing Libbi really wanted to capture was how hard it must be for the children to attend these sessions alongside school and really push themselves. She perfectly shows the work the children produce and showing off their creative skills.

Upstairs, Danny Ryder worked with Bold Street based News From Nowhere and used the upstairs area to recreate the shop where there is the chance to buy independent literature and postcards, and tea and coffee to drink. This part gives the consumer the chance to take it all in and really offers the opportunity to make a community within the gallery while giving back to local independent businesses.

There are many opportunities while visiting the exhibition to not only take in the fantastic work Liverpool’s local communities are doing to make a positive change but also a chance ourselves to think what are we actually doing now, what would we like to do in the future.

Pause for Living, Roxy Topia & Paddy Gould; An exhibition at...