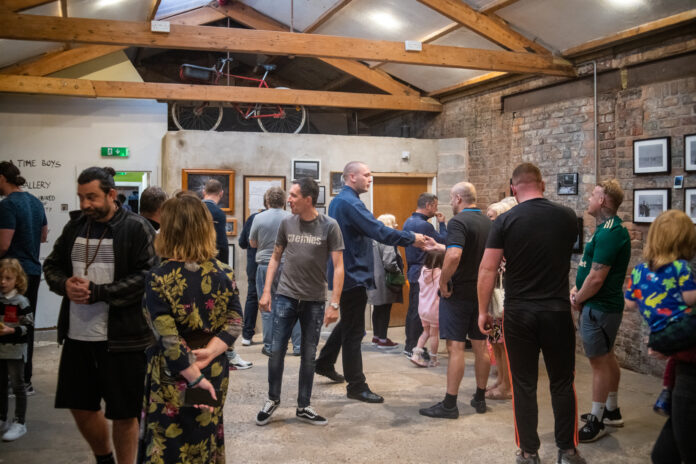 It doesn’t remotely matter if you’ve got formal training as an artist in order to be one. What matters is an open mind to new ways of thinking, and being open to sharing that thinking. One Day at a Time Boys is probably the most obvious evidence of that I’ve ever seen.

When you remove fear of judgement, anyone can tell their story more effectively, or help others tell theirs. Sam Batley has been through the same journey as Ian, Wayne, and all the others in the project. So there’s no judgement from the off.

The exhibition starts with a group of residents from Damien John Kelly House, an abstinence-led residential recovery centre in Wavertree.

One of the most powerful thoughts which recurs with this show is that at the time these lads started taking these photos, they’d got to a point in their life where they’d decided something was wrong.

Something was wrong enough for them to stop and say “I need help to get out of this”. And through that they’ve restarted or recovered their life, not just their health. And the way Damien John Kelly House works is to create community. It’s so apparent in all of the images that they’re by a group of people who, for the most part, get on with each other immensely.

They’re a team, and for this show, a team led by Sam Batley whose had the chance to come through what they’ve been through, and to go back and introduce creativity into their lives, just as it was for him.

At some point in the process behind this show, the artists, photgraphers, and human beings who made it, looked up and realised they were creating art, and sharing their stories through it, not just sitting through another workshop.

I missed the last show by Dead Pigeon Gallery, so I was determined to see this. Just round the corner from my old house, curated by Sam Batley, whose own journey to this exhibition has been just as important as the others whose work he has pulled together.

Words, Patrick Kirk-Smith
Images, Gary Lambert, @glamgigpics
One Day at a Time Boys was at Earth at the Bakery for one week. It’s closed now, but you can still see some of the work in an exhibition by Sam Bately running at Open Eye Gallery until 19th September

Farewell Victoria Street; a sad goodbye to a cultural hub, and...