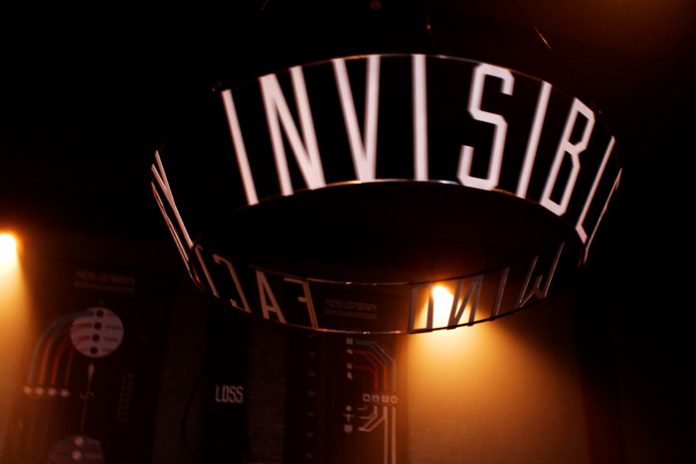 Tonight, I was exposed to the Omphalos. I’m still not 100% sure what that is, but I was exposed to it apparently. The hypochondriac in me is mostly hoping it wasn’t viral, but the open minded version thinks it was perhaps a new kind of energy.

Whether Invisible Wind Factory has found a new kind of energy or not is open to speculation I think, but the warehouse was definitely buzzing with something new.

My initial reaction was a slight let down, simply because I’m not a natural city dweller, and having my hand stamped is wildly outside my comfort zone. That reaction, worrying, was a preconception of accidentally walking into a bar instead of a venue. The reality, stamp aside, was a spectacle of people who believed wholeheartedly in the power of what they were doing.

I mean that in two very different ways. They believe in The Kazimier and the strength of the community that has kept it going. More notably, they all appear to believe in Invisible Wind. And they went to great lengths to tie humour, creativity and the odd bit of techy nonsense together to convince everyone else this new energy was worth believing in too.

After a brief tour from Oliver Hollis Leick, performance capture artist, who has been dedicated to this project from its outset, we had a chance to be a bit more nosey, climb a few stairs and look behind a few curtains, but it wasn’t the right place to try and observe in that way. The artists and performers involved put on such a dedicated pretence that it was worth going along with, and aside from the odd sneaky photo we tried our best to behave and experience the Omphalos just as everybody else did.

Then there was the big finish. The tales of the team of brave explorers taking on different roles, which had guided us through the musicological display of the history of the discovery, escalated in an instant. In a room full of slightly nervous faces, and only a small amount of light to see them by, an aggressive assault of noise took over in a flash, and that was that. We were in.

The only word I have found to express this performance so far – and believe me, I have been wracking every part of myself to find some more – is intense. Light, percussion, kinesthesis, surreal wardrobes, war paint and fire were just some of the elements that kept on building intensity. By the end of it my mind was on the brink of falling to pieces; I’m still not sure if it that’s good or bad, but as was announced at the end, “it doesn’t matter if you understand the Omphalos, just that you experienced it.”

And it is an experience. It’s not theatre, and it’s not performance art. I can’t think of many genres that would accept it at all. It’s Invisible Wind Factory’s complete lack of a genre that makes it so exciting though. It is a leap into the unknown for everyone involved. For The Kazimier, they can’t possibly predict how it will be received; for the performers, they must learn more about their subject with every song; and for the audience, they are forced to question everything at every stage.

Omphalos at the Invisible Wind Factory
1 of 5