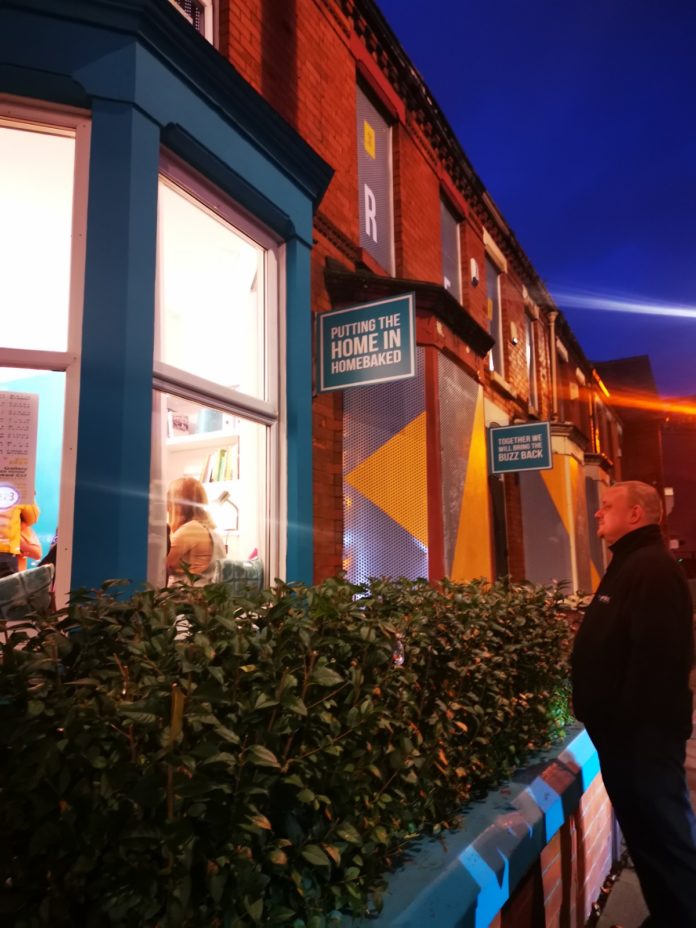 How do you deal with it when something bad happens where you live? Pulling down houses bad. Communities dispersed bad. Fear and anger bad. It’s trauma, a mass, collective trauma. In your most powerful frame of mind, you hope (pray?) you would go through the disbelief, the rage, the terror and then want to make something good, make something for yourself, not imposed from the top. Clawing, with your own bare fingers if you need to, to bring a little light into the darkness.

This is a beautiful row of houses. That strong, red brick, sturdy kind of Liverpool terrace this city does so well. They remind me of our dads, in a way. Big fellas. Fellas who’ll stand over you and protect you. Immoveable fellas, who only shift when something much bigger they can’t control gets in their way.

You sign a disclaimer (this is, after all, a derelict building), step over the metal frame of the doorway and come inside. Feeling the walls with fingertips I kept thinking of the Lemn Sissay poem

That day turned into weeks, months and years, but this house, this exhibition, is a monument, a celebration of living in the present, of holding up one’s hands to the past and saying “enough”. Of knowing much more is to come but of taking stock, pausing, breathing.

The art is beautiful. There are 24 artists on show here, as large a group show as you’d see in any other gallery in the city. The timeline is in the backroom (it’s hard not to describe the rooms as you would if you were seeing the house as a potential buyer) and then in the front room there are missives and memories from the community. Cows coming down the street, characters from the neighbourhood. 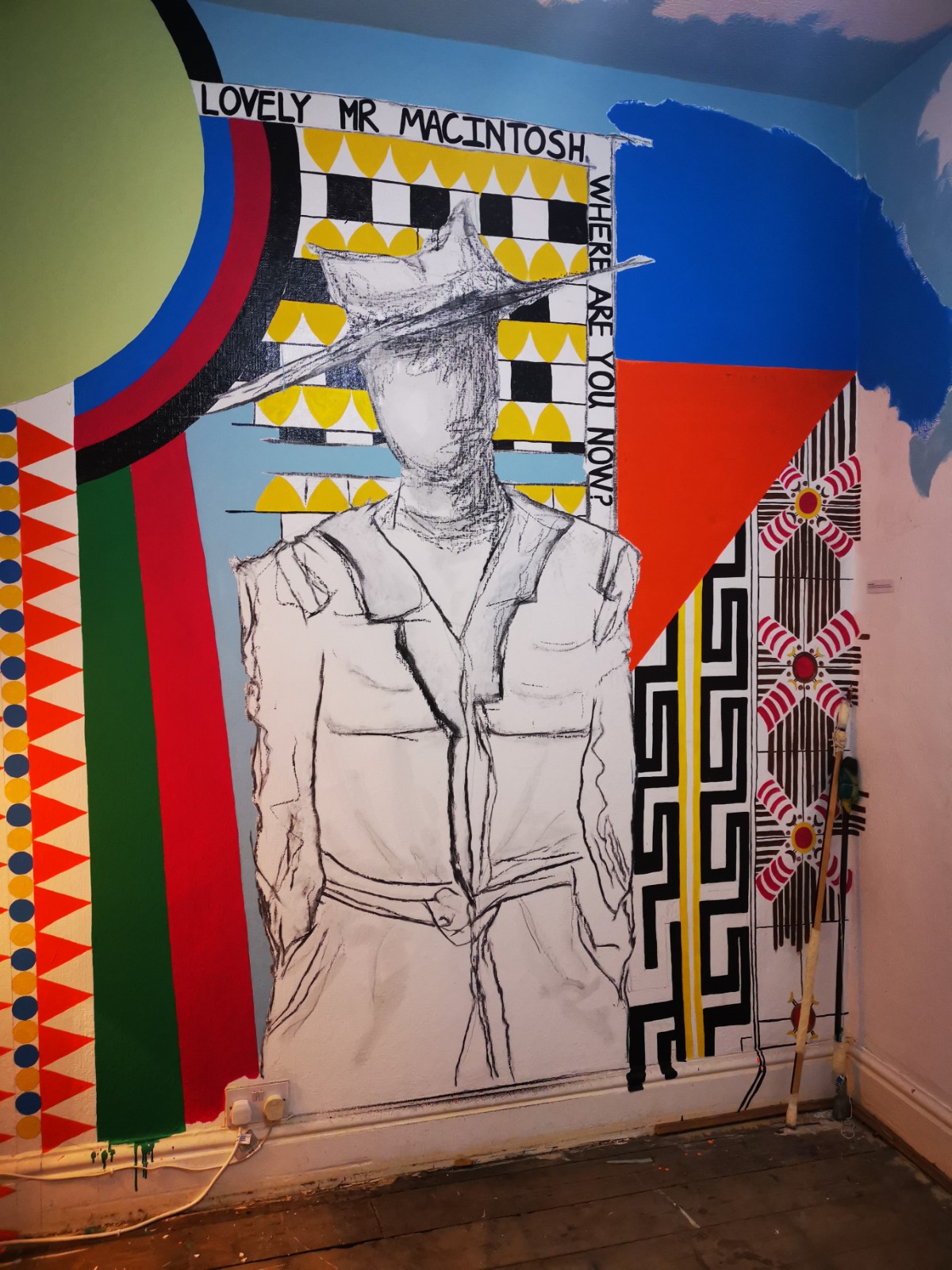 In the front room upstairs (with a gorgeous fireplace) Mark Loudon’s collages layer together the change in a street. I’m not sure how much is real, but it’s like you’re suddenly seeing everything a street has been, or could be, in one glance. A little overwhelming.

Franny G. Williams’ clothes use the most gorgeous retro fabrics. Lena Simic’s film of Everton, capturing a house being pulled down is so heart breaking, so gut-wrenching, I had to look away and then forced myself to look back. You don’t get to look away from this. There are two images of Renaissance Women, Mia Tagg’s stunning project turning iconic women into pieces of art. Jennifer John is fierce in her protrait.

Tim Brunden’s video installation down to what would have been the basement – scenes from the beach in Crosby and Wallasey are projected onto the floorboards – makes you feel like you’re glimpsing into a different, magical world. It’s like a BBC kid’s TV show from the late 80s, a Tom’s Midnight Garden for L4.

Jayne Lawless and Janet Brandon’s video piece in another bedroom charts the demolition of houses – in one moment the camera zooms in just over the arm of a digger to show in sharp focus the wallpaper that remains on a now exposed wall. The tiles of what was someone’s kitchen. The wallpaper, probably chosen with laughter, pasted onto the wall as a family made their house a home, now exposed in the cold blue light at Anfield.

It’s in this room that there’s the most powerful pieces of work. It’s Lovely Mr Macintosh, as Jayne Lawless (artist and Dead Pigeon Gallery co-founder and curator) says an “imaginary imaginary” friend created by her and her brothers. The layers of these family homes, whose walls have seen tears, joys, births, deaths, drunken parties, birthdays, Christmases, rainy Tuesdays and lazy Sundays. The mural of Mr Mackintosh reminds us that these walls are keepsakes, they hold our memories like a safe.

Because the real showstopper here is the house. This is one of the houses soon to be renovated by the Homebaked Community Land Trust. Every artist here has been connected with Homebaked in some way. It is, as they say “more than a pie”, it’s the foundation of a fresh perspective of a community.

Walking through this house, teetering on destruction, like a patient who survived the bad night, it gives you the same feeling you get when you walk through someone’s home, especially when it’s an old house. These Victorian terraces are living social history. We’re only custodians of houses after all. All we’re meant to do, really, is make sure they last.

On the launch night the front room is full of people and music. A little Silent Sheep (welcome back, lads) and you’re sent off into the night, waved off from the doorway like you’ve just spent the evening with your mates celebrating their new home. There’s a sense of triumph. This is what we’ve missed. We’re in a period of tumult, and some of us have been in it for longer than others. Our society, someone said, has been turned upside down. And it has.

There are jagged gaps where our support services used to be, bits of support that helped people wrenched out leaving sores. What’s left? People, that’s what. People living, waking up, washing their face and stretching, living their lives, having a laugh. Making things, breaking things. Creating.

If art truly is a mirror, if it is the beating pulse then this house in Anfield isn’t its heart it’s its brain. It’s sending messages to make dulled limbs twitch and spark into movement and action. It’s telling you to think, to shift, to act.

There’s only one question left. What’s next?

Review: MINUS at Tate Liverpool (an exhibition that never happened)