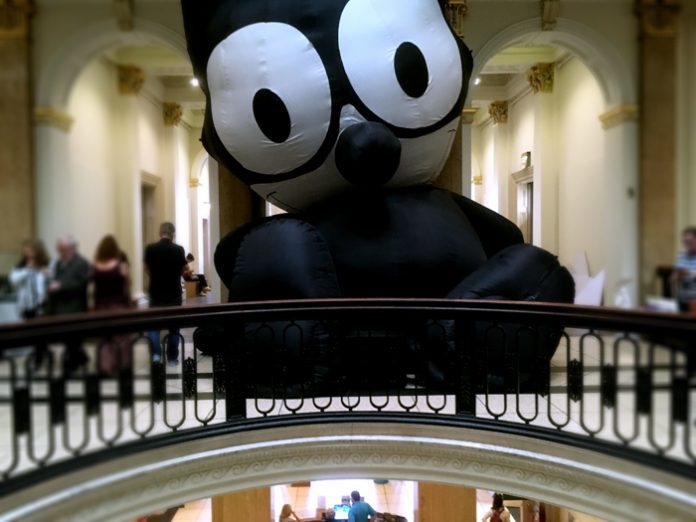 Mark Leckey brings the fiction of the virtual works to an oversized reality in three-dimensional form with ZOO LOGIC.

Mark Leckey, the Birkenhead Boy and one-time Turner Prize winner, has brought a colossal, larger than life form of Felix the Cat to the upper level of the Walker Gallery. Although his academic life, the gateway to the Art World, was a little chequered his early successes sprung from graduation, then propelled through the Turner Prize. What hoops were jumped to get this feline form to the Walker Gallery?

Growing up on the Wirral from a working class background both Leckey’s parents worked for Littlewood in the days where brand name retails store’s dominated consumer culture. Finding little stimulation from a Beddington Comprehensive he left with one O-Level in Art. From this, he decided to reject possibilities of training schemes and signed on. He became one of the ‘Casuals’ of the early eighties, sporting designer clothing and assembling in gangs of white male youths. His stepfather became disenchanted by Leckey’ lifestyle, penultimately, giving him a long talk about direction in life before throwing him out to fend for himself. From this, he traveled to London, finding no success in his attempt to sell Jelly Shoes from a bygone era at Portobello market. He then began his art direction, leading him to study in Newcastle.

His works for his degree showing felt very little to Leckey, producing a system of strip lights he considered to be a kind of imitation of art rather than work of genuine merit. However, this was to be his first plummet to success, the work gaining a place at the sought after New Contemporaries Exhibition, and his piece being exhibited beside a work produced by none other than Damien Hirst. Now free from academia to take his creative practice in directions he desired, Leckey began to create works around British Culture.

His first major success, ‘Fiorucci Made Me Hardcore’, was produced right at the end of the last decade of the twentieth century. In this, he assembles footage from the seventies and eighties underground music scene, accumulating in the rave culture which dominated the nineties. This brought him a cult following and an instant audience for his earlier Felix the Cat work. In 2008 he was to give us ‘Industrial Light and Magic’ developing his skills in combing archived footage and ultimately being awarded the Turner Price at Tate Liverpool during the Capital of Culture celebrations. Nostalgia, the re-experiencing of feelings, and the relationship between virtual and real life have dominated his work since the award.

Felix was taken to the Grundy Gallery in Blackpool before his journey to Liverpool. Again, he has been located in an exhibition space which looks to encase the gigantic from, his body angled over and static against a pillar. His eyes peering over the balcony to the lower floor, looking directly at the visitor.

Zoo Logic was originally commissioned by the Arts Council to celebrate its seventieth birthday and presents ‘FEELINTHECAT’ adjacent to the inflatable form. In this, we have a space where original footage of Felix is mixed together in Leckey’s usual methods of cutting sound and visual motion together. His choices of three-dimensional form and re-cut footage present us with High and Low Art simultaneously, the ability to engage with a family audience combined with the potential for critical thoughts in regards to culture and engagement.

In his early fifties, Leckey has had a constantly developing and growing art career. Although visible in the creative market of the YBA generation he was never sought to become one of those entitled to the term. This has been due to the ever-expanding changes in his work through new media to physical forms.

Although similar themes of British Culture and general nostalgia works vary greatly in presentation. However, we have media installations which look to engage with the virtual world on a level which has not been explored so intensely to date, Leckey can only continue to grow as an artist and bring more to Liverpool,  London, the UK and the international Art World.

Zoo Logic continues until the 26th of February 2017.