Nothing is what it seems in this exhibition; there is deception everywhere. Lucy McKenzie has adopted and absorbed the essence of trompe l’oeil, made this ancient technique of tricking the eye her own, and brought it bang up to date, using its unsettling nature to plug into contemporary issues. It isn’t just her extraordinary trompe l’oeil technique that deceives the viewer – everything here seems innocent until you look more closely. The devil is definitely in the details, as the saying goes.

McKenzie is a serious artist who clearly enjoys a visual joke and, as any successful comedian would confirm, the key to its success is in the subversion of real life. And here, McKenzie finesses that subversion. As in all good art forms, there is a shadowy side to her work and this is what makes her exhibition so much more than a jaw-dropping display of prowess. McKenzie understands that if the work is too facile it will have no impact, if it’s too strident it will alienate people; it has to be equal parts of light and darkness: “I don’t want to shove it in people’s faces. It’s not about the shock but the issue. It feels more real to come at things sideways”.

The art world can be rather snooty about painters who ‘copy’ but McKenzie faces that head-on and uses painting primarily as a means for reproducing other imagery: “If you asked me to just do a painting, spontaneously, from my imagination, I would have no idea what to do. Everything for me is in response to something else”. In this, she’s always looking for the underbelly of what is being presented to us in our daily lives – be it in areas as diverse as architecture, literature, fashion, music or sport. She finds connections between the most unlikely sources and uses those same images to expose the exploitation of culture as a political tool.

There is a frequent sense that McKenzie is ahead of her time in the issues she has tackled but looking at them now, the flip side to that is the depressing thought, plus ça change. A piece in the Sports gallery is a case in point; made in 1998, it depicts her painting of a photograph from the time of a female athlete’s rear view as she is bent over in the starting blocks. McKenzie’s intention is, of course, to highlight the ingrained sexualisation, eroticisation and abuse of women in sport. Fast forward nearly quarter of a century and we see the controversy caused by the German female gymnasts who broke with convention and wore full body suits at this year’s European Championships instead of the traditional skimpy leotards.

This is the first UK retrospective of McKenzie’s refreshingly hard to categorise art practice. It brings together over 80 works from the past twenty years, making it a vast exhibition, which takes up the entire top floor of Tate Liverpool. The works range from actual size architectural paintings and installations to small design objects in vitrines. The source material for many of these provides the viewer with plenty of homework; there are just too many compelling back-stories to absorb in one go.

In the case of the monumental structure at the centre of the first gallery, for example, we learn that it is based on the floor plan of a house in Prague designed in 1930 by the Austrian modernist architect Adolf Loos. In a didactic essay he argued against the art nouveau ornamentation that emerged in the late 19th century, saying that it should be eliminated from useful objects. And yet his interior designs were filled with opulent surfaces, an incongruity McKenzie has seized, recreating the architectural lines of his villa in a huge installation, covered in trompe l’oeil marble canvases. Another exhibit later on, Fascist Bathroom 2012, shows how the far right developed its own brand of modernist design, using luxurious marbles in the style of Loos.

To one side of the Loos house is a curtained off projection of a film entitled ‘The Girl Who Followed Marple’. This is McKenzie at her most playful, lulling the viewer into the proverbial false sense of security before delivering a punch that will have most women cheering, or at least smiling ruefully. It features McKenzie emulating Agatha Christie’s famous detective, whose sleuthing reveals the ‘crime’ to be menstrual blood. It’s a brilliant spoof in Andy Warhol vein of an actual product, in this case nothing so commercially ubiquitous as a can of soup, but of a woman using a menstrual Mooncup.

Such transgression of the status quo is typical of McKenzie, who is always seeking to push and expand her language as an artist: “I still have a longing to learn. My practice isn’t just about having a career”. This desire to learn took her to Brussels in 2007 to study decorative painting, something that gave her the expertise she felt she needed in marbling and muralism to say more with her work. She began exploring, for example, a technique known as ‘quodlibet’ (‘whatever you wish’). These are hyper-realistic still-life paintings, traditionally considered a conservative style of painting, but which, McKenzie uses here in her insatiable determination to question and subvert. In exploring the power of visual language, McKenzie takes it apart, exposes the hidden layers, and gives it back to us in a way that leaves us in no doubt that nothing should be taken at face value.

There are several works referencing McKenzie’s Glasgow roots. One of these demonstrates her love of maps, which she finds fascinating for the information they give but also for their individuality. It is a painting of two overlaid maps of the city, one from 1938 and the other from 1966. The former reveals a thriving city with local transport links, including a tram system that was one of the largest in Europe at the time. The latter shows the territories of local gangs, after years of decline in the city’s standard of living, including the demise of the trams.

A retrospective is usually an ideal opportunity to observe the trajectory of an artist’s career. But there’s no comfortable straight line in McKenzie’s practice; the tangential roads she has taken are extraordinary. And yet, there is a thread – that of collaboration. This desire to work with other creatives has taken her into unusual territory, including a youthful and controversial connection with a soft porn photographer. She has no regrets about the collaboration; in fact she still works with him and did so on the Marple film described above: “I was young but not naïve and had agency over the pictures”.

One of the works in this exhibition is related to these photographs and demonstrates her willingness to use her own history to challenge entrenched behavior. It shows a painting of a partially redacted email, written after a male artist left her out of a request to exhibit the images of her. Addressing the curators of the exhibition, McKenzie takes them to task over the ethics of appropriation and the, often, regressive sexual politics of the art world.

The longest running of McKenzie’s collaborations is her 20-year partnership with Scottish designer, Beca Lipscombe, with whom she founded the fashion and clothing company, Atelier E.B. Their joint venture is represented in the show by a wonderfully theatrical window display, which evokes bygone days of fashion and shopping. There’s even a rack of the label’s clothes to try on before you head to the gift shop. 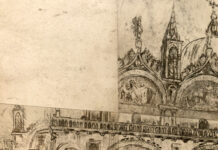 Andy attends ‘The Medium is the Medium’