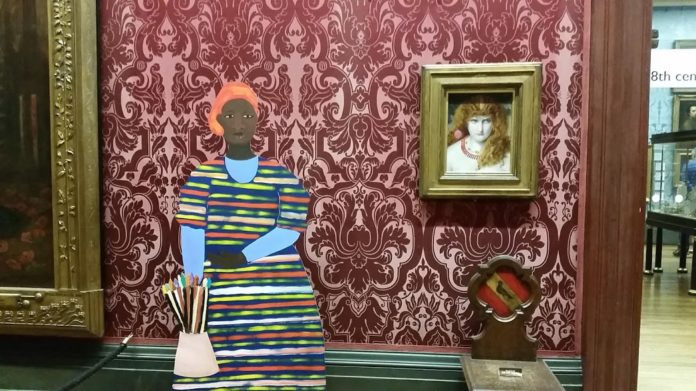 It’s an awkward but undeniable fact that considerable parts of Liverpool’s past wealth were built on profits of the slave trade. According to historians, up to half of all the city’s shipping activity from 1750 to 1807 was involved in the transport of slaves and related activities. What makes this even more uncomfortable is the legacy it has left us is, outwardly, largely positive, maintaining the shipping trade which would later make jewels like the waterfront’s Three Graces possible. In the face of such grandeur, the voices and names of the human cargo which suffered for these profits can be all too easily forgotten.

It was in 2004 that the now Turner-prize nominated artist Lubaina Himid decided to challenge this with the installation Naming the Money. And it was in 2013 that she permanently gifted 90 of the 100 life-sized cut-out figures, previously exhibited at other galleries nationally, to the International Slavery Museum. Now they’ve made their way across town to the Walker.

Something about the naïve style of these figures makes them seem, on first glance, irreverent.  As if their purpose is to disrupt and disturb the classical formalism of the gallery around them as an amusement.  And of course, disruption is their purpose.  You are still free to enjoy the gallery’s art, but you will now do so with an awareness of these people who Himid will not allow to be forgotten any longer.

The figures can be found across the entire space of the gallery, interacting with the works on the walls, and the people they portray in various ways.  In some places they act like additions to the scenes, previously omitted, perhaps seen as insignificant distractions.   Other figures are more distinctly separate. Take Lubaina, in Room 4 – being leered at by a Bust of a Man in Oriental Dress, facing the Portrait of Sir Thomas Lucy and his Family.  She deliberately works in contrast to these traditionally celebrated works, as an object to be manipulated for their own intentions.  There is justice: Lubaina is the first figure your eyes are drawn to when you walk in the room.

This justice is embedded in the installation’s very title.  Naming the Money: and every figure here has a name.  Two names, in fact – their real name, and the slave name given to them by their masters.  They have stories, too.  In short verses these figures ‘tell’ us snippets of their histories, likes and dislikes.  In Room 2, you can listen to Himid reading out these verses, literally giving her characters a voice.  She is bringing them to life and giving them the dignity they have been historically denied.

Alongside Naming the Money, half of Room 9 features Himid’s series of watercolours Scenes from the Life of Toussaint L’Ouverture.  This comic-style narration of the life of the leader of the Haitian Rebellion follows the same theme as Naming the Money.  Himid has taken a life about which we modern Europeans may know very little, and gives it life.  Life beyond a “glorious history”, which is equally concerned about schoolboy lessons and who will do the laundry.  It humanises, makes us curious.

In the other half of the room Himid has chosen 10 artworks by female artists.  In her own words on the wall, she explains that these works have been chosen as “deep contemplations on the artist’s experiences of life”.  Some of these works are stylistically very different to Naming the Money, but they fit in with the exhibition’s purpose –  giving a spaces to their voices, the female perspective on the small things which is still rare in the art world.

Naming the Money sympathetically and effectively questions the narrative of the characters in the grand paintings on the walls by bringing us into contact with the people who are left out – those who served and, perhaps, suffered in the pursuit of their wealth and status.  With her Turner nomination Himid’s star is firmly in the ascendancy, and her name guarantees people will come to this show.  What they’ll find is an artist who does not let hitherto silent voices be forgotten.