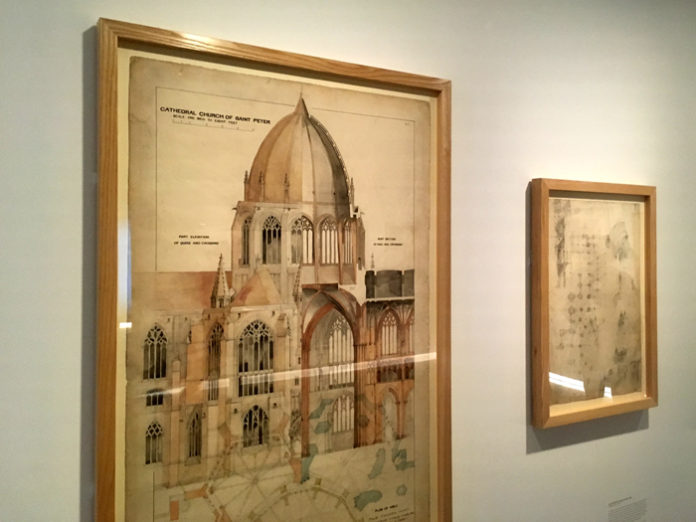 It’s really quite amazing to think Liverpool Cathedral was designed by a 22-year-old architect who had worked on the plans in his spare time. The architect, Giles Gilbert Scott, (who pipped Charles Rennie Macintosh to the post, and another 102 entries) won the competition that would eventually bring his drawings to life and create one of the most awe-inspiring buildings of our country.

Scott’s plans are part of the exhibition; Liverpool: Mover, Shaker, Architectural Risk-Taker, held in the new RIBA North and funded from a £67,000 grant from the Heritage Lottery Fund. The centre, based at Mann Island is the RIBA’s first centre for architecture outside London, and the first permanent gallery. Its first exhibition brings together over 30 drawings, models and watercolours that showcase the city’s architectural might-have-beens. This exhibition also brings home how an architect’s life is not an easy one; all that compromise at each stage in the game, whether aesthetic, financial, practical or just a client’s simple change of mind. How their original visions may get chipped away at, deconstructed or just junked. Or how the end product can be far removed from a creative vision, if it ends up being realised at all.

Through an historical perspective we are witness to this via the plans of the brutalist architect Denys Lasdun with his 1950s vision of a Metropolitan Cathedral. While intriguing, it would never have had the gravitas to impose on the city as a cathedral should. Or the viaduct over St James’ Cemetery by Stirrat Johnson-Marshall (1931). It would have made a great travel poster of the time, but more so a spectacular monument for the city if it had made it past the paper stage and into bricks and mortar. It’s sad also that Scott’s vision of an elegant housing complex incorporating beautiful gardens to surround the Anglican cathedral was only ever contemplated. It feels like a mournful loss, despite never existing beyond the imagination.

Scott himself went on to design some remarkable buildings which included Battersea Power Station, Waterloo Bridge and who knew he was the designer of one of the most iconic symbols of our time, the red telephone box. It was all power to Liverpool for putting its faith into one so young and without having another building to his name. Would that ever happen in this day and age? I think not.

I went to see this exhibition on a sunny Saturday afternoon. The Liverpool waterfront was at its most extrovert and was full of people from all corners of the globe enjoying their day. However, behind the cool exterior of the award-winning Broadway Malyan Mann Island complex, the surroundings are more introverted and reflective. This exhibition comes from a quiet, philosophical stance and puts the city into a thankful and timeless perspective. A perspective from which to take pride that our city is still believed in and invested in and how new remarkable designs continue to be built. That might have not necessarily been the case if Margaret Thatcher and Geoffrey Howe had have had their way in the 1980s. We then might have been looking at a much more sterile vision across the city today.

The heady extroversion outside is the result of that continuing belief. Well worth a visit.