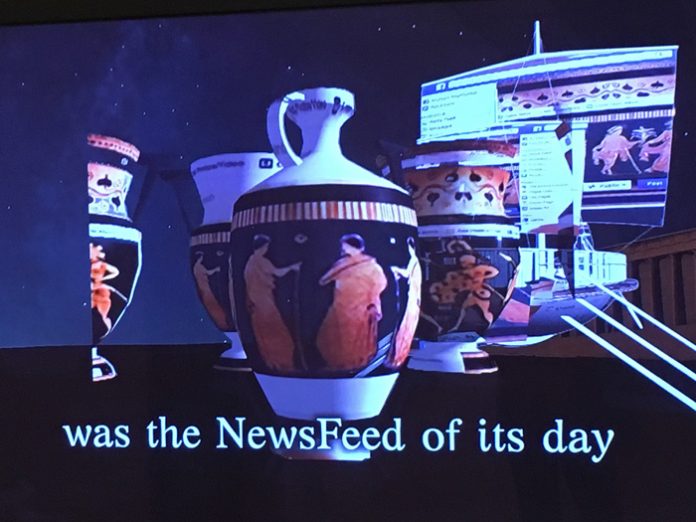 Words and pictures by Moira Leonard

Step back in time as Tate Liverpool presents a new vision of Ancient Greece. Encounter classical sculptures from the collection of the National Museums Liverpool, alongside newly commissioned artworks in the first floor galleries.

Responding to one of the Liverpool Biennial 2016 ‘Episodes’, Tate’s Artistic Director, Francesco Manacorda said “Ancient Greece is a story of ruling classes with economic wealth and largely recognised as the start of democracy”. Throughout Liverpool echoes of this legacy are all around us especially in the city’s eighteenth Century architecture. “Think of emerging from Lime Street Station and your first views are the glorious Corinthian columns of St Georges Hall”.

Taking this as a starting point for the exhibition, the artists imagine a world where ancient Greek and contemporary artists collaborate, merging the past, present and future into a single fiction – just like the city’s architects did when they designed Liverpool’s neoclassical buildings.

Many of the historical artefacts in the exhibition are from the unique Henry Blundell collection originally displayed in various rooms at Ince Blundell Hall, including the Pantheon and the Garden Temple. Manacorda outlined his theory that Blundell used them to create a form of ‘time travel’ showing people what it would have been like to live in ancient Greece.

Continuing the theme of combining past and present, contemporary Belgian artist Koenraad Dedobbeleer has done an amazing job displaying these artefacts in their new context.

Manacorda goes on to describe how Ancient Greek Ceramics tell a story too. “Sometimes the same character appears in different situations and on many vases” he says. A theme explored by Andreas Angelidakis (Greece) who uses film to consider such vases, comparing them to modern day newsfeeds and social media.

Betty Woodman also picks up on the narrative of animated vases appearing to step out of a large scale painting leaving a white ‘shadow’ behind, almost as if the two dimensional image wants to be a three dimensional one.

In other imaginings, Jumana Manna’s work draws parallels between Athens and Jerusalem to relate how their stories both contributed to the West’s self-construction, which in turn mirrored and partially shaped the economy and politics of the Middle East. A theme taken further still by Ramin and Rokni Haerizadeh who, along with Hesam Rahmanian present an amazingly powerful video reanimating footage of ISIS militants destroying historical artefacts in Iraq.

Meanwhile watch out for the seeming random scattering of debris on the floor – this is a deliberate installation. Apparently the artist collected modern day objects from across Europe and scattered them randomly across all the Biennial venues. Another thread to bind the Liverpool Biennial 2016 together. Curious…

Ancient Greece at Tate Liverpool
1 of 3