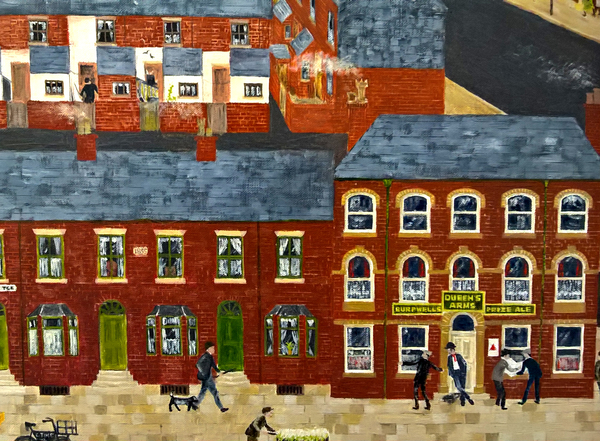 John and Veronica Gibson were both described as great hosts, and had unbreakable bonds with the communist party. But form their terraced home in Aigburth was an arguably even more important history being built visit by visit. The product, an unchallengeable display of Communist and Marxist history that trails through generations of art movements, is on display at Corke Gallery, just around the corner from their home.

John’s obituary describes him as a compassionate Marxist, so the serendipity of the collection’s donation to Corke at a time when the UK is leaning further left than it has for decades, provides a truly exciting wander through history in this intimate gallery space just off Sefton Park.

And perhaps it is the rise of a particularly popular brand of Socialism in the UK at the moment, or maybe it’s just the resonance with the stereotypically communist style that has begun to resurface on album covers and nightclub posters on every street corner. Whatever the reason, the work on display has an overwhelming resonance with today’s culture, spanning from paintings to political propaganda pieces, including the wood block prints that are only to be expected of a collection with the 1970s at its heart.

Part of what got put on display was a set of paintings from Aurel Tar, an artist born and raised in Austria, and working in Romania, who seems to have dedicated his recent life to representing modern political histories in Eastern Europe – Globalization in particular. A subject that has become oddly relevant to the current political climate in Britain. The artist uses structural play to highlight his theme, with a tetraptych (that’s an artwork made up of four dependent parts – don’t worry, I didn’t know either) at the heart of his contribution to the show, titled Wonderful Collapse.

What makes this a truly great show is the narrative-sum of all its parts. It’s something that might never have been seen; a collection made from passion and belief; it’s principled; it resonates with current politics; but most of all, it doesn’t force any of that. I personally never quite swooned over Marx as much as most of my colleagues at Art School, and still sit in a very beige field between the right and the left of politics, so this isn’t a show to make you swivel your thinking. Just one to make you appreciate the power and creativity of a movement that will always present itself creatively.

Life on the Left at Corke Gallery
1 of 5
Advertisement

Review: The Liverpool Nude – An Exhibition of Work from Merseyside’s...