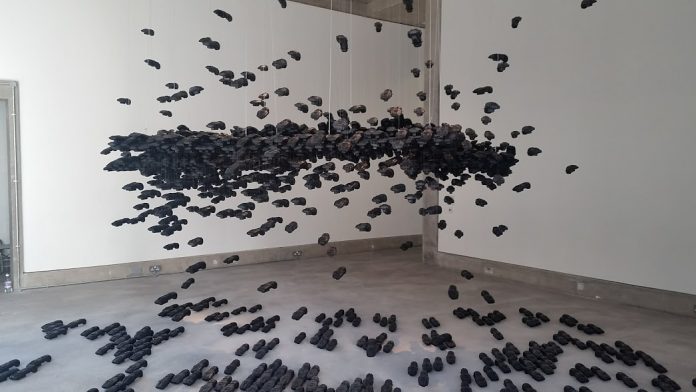 Larissa Sansour: In the Future, They Ate From the Finest Porcelain

What do we really know about the past? For most of us, our understanding of history comes from a mix of school memories and TV documentaries. In these contexts, we are required to buy into a particular historical narrative – the one that gets us the marks in the exam. And why question it?  British history, with its focus on monarchy and wars, is rooted in dates and events which seem unquestionable. And unlike in contemporary political debate, voices which disagree with the accepted version of events are often killed off or written out.

Disrupting accepted narratives is exactly what Larissa Sansour’s In the Future, They Ate From the Finest Porcelain seeks to achieve.

The exhibition is based around and named after a 30-minute film. It’s a sci-fi film, set in an inhospitable world. A world filled with intimidating, insect-like spaceships, which look far more at home here than the human figures. A world of grief, with the loss of a sister a recurring motif, and of conflict, where bombs fall from a foreboding sky.

Sansour’s ideas and intentions are explained through the conversation which narrates the film.  Porcelain is a symbol, intended to change this world’s historical narrative. Porcelain is non-native to this desolate wilderness so by burying an imported, luxury material, future archaeologists may reconsider the lives and means of the people who lived here. They may begin to think that their lives were better than they’d previously considered. Sansour’s protagonist couldn’t be accused of being selfish – accepting her own fate, she is working for a future justice and dignity.

As in all good sci-fi there is no reference to real nations, however it’s clear throughout the exhibition that this work is about the Israeli-Paletinian disputes. This becomes a fact in the documentary photographs on display in the Cloister. Sansour is herself Palestinian, and has made the film’s vision of burying fragments of an imagined past a reality. Scattering them across Israel is no doubt controversial, but such a suitable way of approaching the debate The Holy Land’s places and objects confirm the beliefs of millions across the world – if these small fragments even did disrupt their story, the effect would be felt universally.

Across the rest of the exhibition, the film’s visuals are expanded into objects for the present.

We see the plates on their production line, their ordinariness striking when you know their potentially world-changing purpose. The co-ordinates for the locations of the buried porcelain are in bomb-shaped cases, appropriate considering their incendiary content.

Bluecoat is also debuting a new addition to the installation, And They Covered the Sky Until It Was Black. The effect of the hundreds of black spaceships which have swarmed the Gallery is unnerving. It’s visually and physically oppressive – they’re wherever you look and step. Like the Biblical locust plague they represent, they’re a powerful symbol of the forces which may work against us, seeking to destroy.

In the Future, They Ate From the Finest Porcelain was created in 2013. But in how Sansour powerfully stands up for the rights of her people – and all people – to be recognised with dignity and justice, it feels incredibly timely.

Sci-fi is so often the catalyst for technological change, so why not social too? You will admire Sansour for having the conviction to make her ideas a reality and feel a curiosity for the future, whether or not her vision will ever be realised. As she knows as well as anyone, only time will tell.