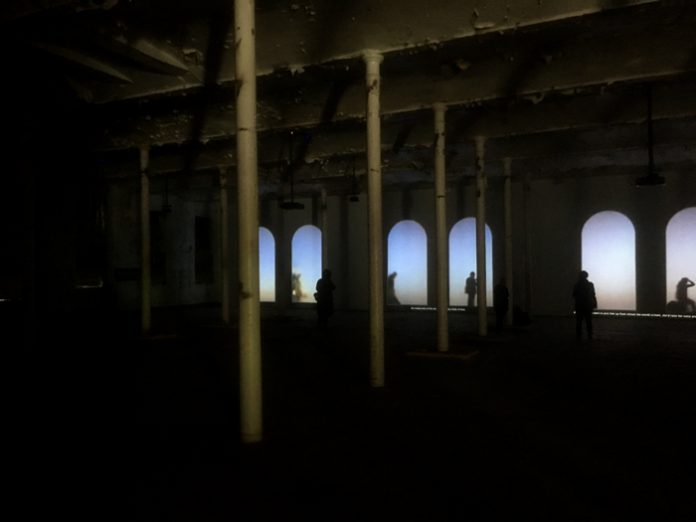 Liverpool Biennial 2016 has gone on tour, working its way across the North of England, so we got on the road and followed the tour to Brierfield, Pendle.

The artist for this instalment of the tour is Krzysztof Wodiczko, whose work was on show at FACT Liverpool during Liverpool Biennial last year. The installation has been touring since 2009, and has twice visited the North of England, where its message resonates with people of all backgrounds for constantly evolving reasons.

Initially a response to the global migratory crisis and how Wodiczko saw it manifesting in Poland and Italy. Since 2009, little has changed in the fundamental issues facing migrants, particularly those who are involuntarily displaced, and while 2009 might have seen a heightening of the crisis, it was certainly not the first time in history where integration and settlement have been big issues.

For the 2016 Biennial the work had a clear resonance with the Calais Jungle and the ongoing settlement of Migrants in northern cities. The installation at FACT had underlying implications of new media communications and how they influence local perceptions of global issues in a fast-news world. It was a brilliant space to listen to people on the other side of the glass, talk about things commonly ignored or misrepresented.

So why bother repeating it?

Well there’s a few reasons. The simplest; it gives the work a chance to reach new audiences, and allows people living outside bustling cities the opportunity to engage in a question they might never have realised art could employ. The second; it gets to find a new relevance at every location it shows.

In Brierfield there is a rich history of immigration, with workers coming from all over the globe to fill staff shortages before the production of cotton was transferred abroad to cheaper labour conditions in Mexico and the commonwealth. The mills moved from use to use, always producing something and always with a mixed community living and working in and around them. Even now, listening to the artist talk about his work, local councillors raise concerns over how a new wave of Romanian migrants might struggle to come in and understand the English translations.

Displacement and social comfort are global issues, but in taking a trip down the motorway to this relocated exhibition it emphasised how localised the differences can be in how different communities consider what’s going on under their noses.

Organised by In-Situ, an artist led not-for-profit arts organisation based in Brierfield, the film installation couldn’t have been more perfect in getting their message across. As they put it, “New collaborative opportunities are nurtured into existence: generating activities, creative interactions, and exchanges to enhance experiences of our locale.” This might not necessarily have been collaborative, but it absolutely enhances the experience of Brierfield.

The exhibition is open at weekends until 11th June 2017, but whether it’s for Guests, Krzysztof Wodiczko’s installation, or for the rare chance to see inside this incredible mill building, you would be doing yourself a disservice in missing this show.

Review: Drawn From Life: People on Paper at Kirkby Gallery