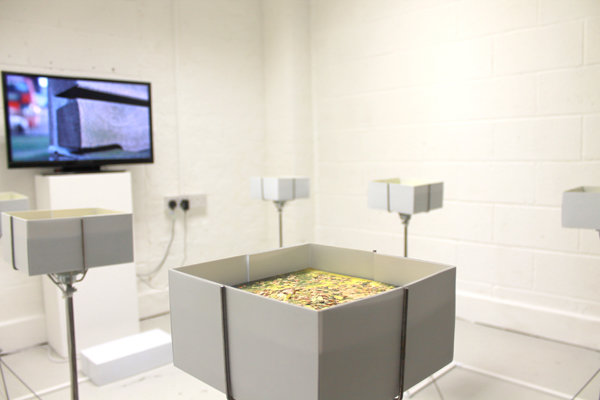 Hidden at the back of The Gostins Arcade, at the end of Hanover Street, is an exhibition that could not have found a better home. Kit Brown’s Symbiosis is an immersive, interlinked, audio visual experience, and A Small View is its perfect hiding place. The cosy gallery space manages to add an even more immersive atmosphere to the exhibition, forcing us through this multi-media recorded experience.

“A conceptual thought exercise”, as Brown describes his own work, split into four interwoven parts, providing four pieces not just linked in space, but by their physical structures. Wires cross the floor and serve the juxtaposed purposes of connecting and dividing the audio and visual aspects of the work.

Park and Tap, the two film pieces in the exhibition loop around on one screen, providing audio to Six Units, which sit behind Score Box – which can only be described, in Brown’s words, as an A/V producing object. The constant audible bombardment from these interwoven elements served as a reminder that immersive art doesn’t have to be forceful, it can be something you choose to step into, and Symbiosis manages this expertly. And to reinforce how constant a bombardment it was, by the end of this exhibition the speakers had begun to succumb to the noise.

I mention this not as a negative by any means, because Brown aims to “provide a critique of creativity, particularly the art of decision making,” which, it seems, the speakers have evolved to understand. Brown also talks about methods, giving way to chance, but within rigid self-inflicted rules, and that is something physically reflected again here. Six Units sit in the centre of the gallery; six uniformed boxes on rigid frames, with uniformly pixelated images covering the speakers, as uniformly trimmed squares of paper twitch around in chance patterns to the audio of the films.

Brown has invited the viewer to join him in questioning creative decision making with this exhibition, by employing the one technique he seems to want more of: honesty. Somehow, through four initial ideas coming to fruition, and an idea to force them all together, a physical mind map has been created, and opened to the public. The subjects of the original films seem almost irrelevant, not once really presenting a park or a full audible conversation; this show creates new work with nothing more than an idea, and presents an all too familiar audience critique from the new perspective of the artist. Critique is the primary object here, reinventing itself as the subject of Brown’s work.

Kit Brown seems to be on a similar thought plane to many others currently, one that seems to be leading to a new Dada, questioning what has become of the original question of value, at times even down to the value of individual words. The first piece you come to in the show, Score Box, is described as an Audio/Visual producing object. Not something you would expect to be mostly analogue, but as we learn from this show, it is unsafe to take things as read. 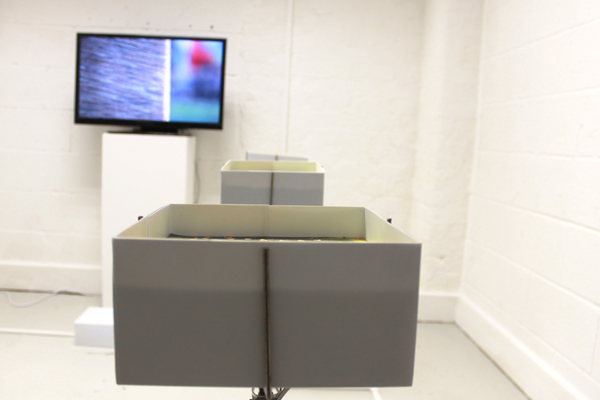 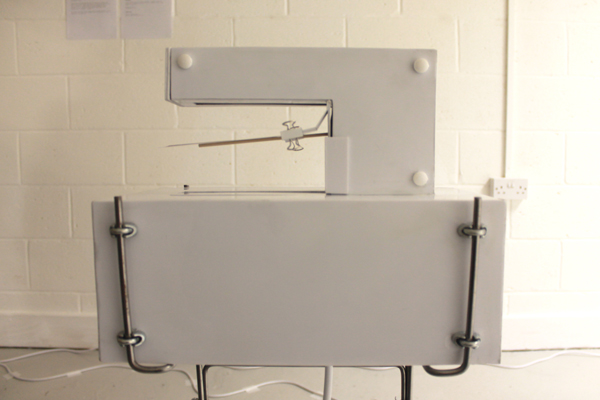