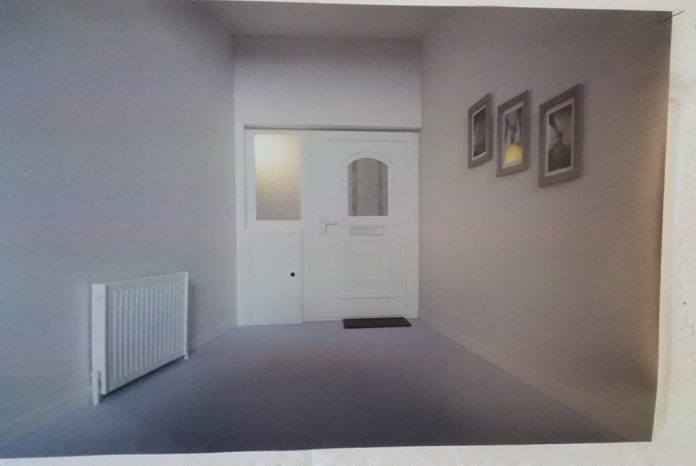 Sight is a sense which most of us are fortunate enough to take for granted. It is the primary sense for most of our perceptions. But it’s also the sense which is easiest to fool. Think of an optical illusion – it works because we entirely believe in what we see. Yet we continue to be surprised when this fallacy is revealed.

This is the idea at the core of Kelly Hayes’ MA work, The Image Affect. The photographs on the wall show what appears to be an ordinary domestic interior – maybe just cleaner, lit slightly more mysteriously than your own. But the video is the key to revealing that these rooms are not all they seem. The devil is in the detail as the camera pans over the furniture: a book is just a coloured block, a doorknob is a matchstick. The whole thing, in fact, is a fabrication.

Hayes spent 4 months building this clever illusory space, and it’s paid off. Because even knowing that it’s not real, there is part of your brain which does not quite understand. Maybe it’s the way you can hear the TV on, or how that hallway looks just like yours, but you can imagine the people who live here. This may have something to do with it being based on Hayes’ own house, that she has injected small elements of her own personality, such as the paintings on the wall. It’s a fascinating reflection on how our minds create the narratives we want and expect.

The aforementioned pictures on the walls of the “house” are actually examples of Hayes’ early works based on sci-fi utopias, and her shift in focus towards more familiar environs is interesting. A utopia is always somewhat unknowable, so open to individual interpretations. But when our expectations don’t quite meet reality within this home, it makes us question that which is most familiar to us.

Kelly Hayes isn’t criticising the domestic or familiar, but she does make us pause and check whether what we’ve got is all it seems.

Kelly Hayes, The Image Affect
1 of 5