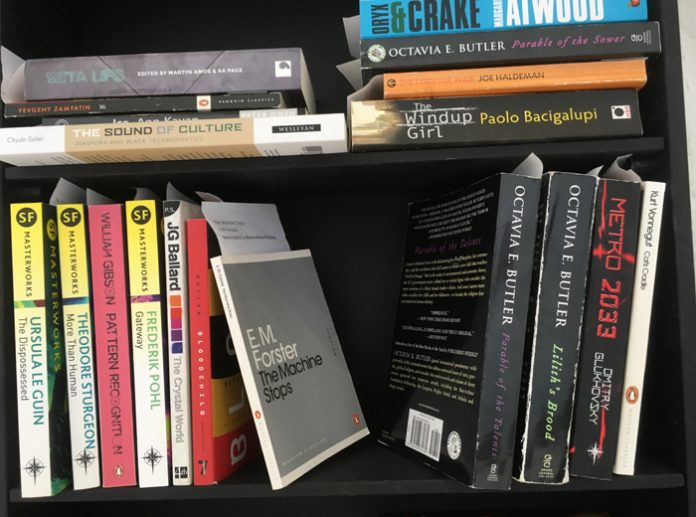 On a night when the Liverpool arts scene was buzzing to breaking point with openings, the Bluecoat was no exception, launching Keith Piper’s Unearthing the Banker’s Bones.

The installation is one of eight works commissioned by Bluecoat and Iniva (Institute of International Visual Arts) for the Arts Council Collections 70th anniversary, and to kick off Bluecoat’s 300th anniversary year in 2017.

Keith Piper and Bluecoat have a relationship spanning 30 years, and the artist has reworked one of his original interactive digital pieces, Robot Bodies, for the exhibition based on a version shown at Bluecoat in 1998. Aesthetically it immediately evokes 80s Robocop vibes, with a huge silver being towering over you as you enter the space. A trackball mouse placed in the centre of the room allows you to interact with Piper’s essay exploring different anxieties around racial difference, and is the first introduction to a central trope of the exhibition.

Alongside race, themes of class and society are present throughout Piper’s work, as is the sci-fi genre. The artist was influenced in particular by Octavia Butler, a science fiction writer, who often critiqued modern day hierarchies as leading to the destruction of our species. Digital prints, Pulp Fictions (a bibliography’ hang in the Cloister alongside a collection of sci-fi novels to further emphasise the thematic strands of destiny, identity, conflict and disaster that can be found throughout the exhibition.

The centerpiece, Unearthing the Banker’s Bones further explores these ideas, presenting three huge tomes, each accompanied by human bones encased in glass boxes, which evokes a feeling of being in a museum as opposed to a gallery. With Piper wanting to examine the present from a speculative future it is the perfect set up; we are the visitors examining artefacts from history.

This acts as a foil to a huge video projection across three screens in the next room depicting montages of global, social, and economic collapse. It is unnerving in scale and content, with glimpses of maps and globes present throughout, it hammers home the impact and implications of present day decisions on our potential future, the disruption of boundaries and new world order.

Unearthing the Banker’s Bones is a challenging and thought-provoking exhibition, particularly as conversations around diversity and globalisation are needed more than ever. It is an autopsy of modern society and dissection of modern life.

The exhibition is accompanied by an events programme, visit the Bluecoat website (http://www.thebluecoat.org.uk/events/view/events/3420) for the full and up to date information.

Keith Piper, Unearthing the Bankers Bones at Bluecoat (2016)
1 of 6