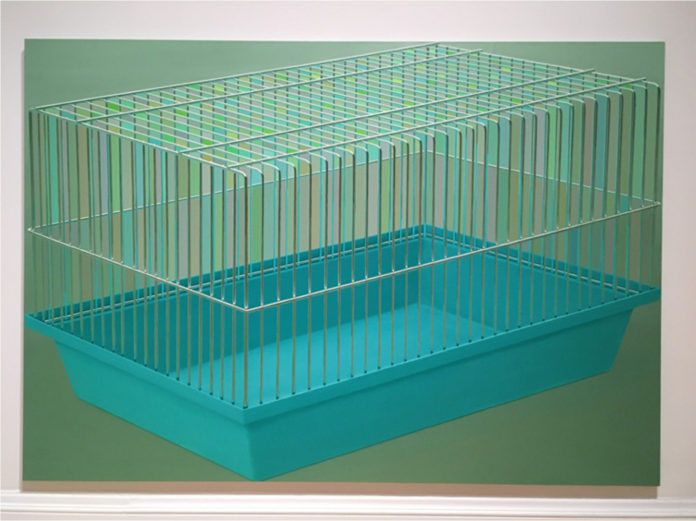 To commemorate the sixtieth anniversary of the competition, Walker Art Gallery currently have on display an exhibition of previous winners of The John Moores Painting Prize. Featuring artists from the cutting edge of their eras, such as John Hoyland, Rose Wylie and Michael Simpson and some pictures that are firm local favourites, the show paints an intriguing picture of the changing face of one of visual arts most broadly recognised media.

Named after the founder of the Littlewoods business empire Sir John Moores (1896-1993), an exhibition of prize entrants has been held at the Walker Art Gallery nearly every two years since 1957. With a stated mission to “encourage contemporary artists, particularly the young and the progressive” the prize has represented the forefront of artistic innovation and has facilitated the Walker Art Gallery in building up a significant collection of contemporary painting, with 24 winners and 54 further works being acquired for its collection.

This current exhibition of prize winners spans the full history of the competition, culminating with the 2017 winner – Jacqui Hallum’s “King and Queen of Wands”. Indeed this exhibition dovetails with Hallum’s solo show “The View from the Top of a Pyramid” which formed part of her 2017 prize. In some ways both exhibitions are tough to locate and navigate within the vastness of the Walker and I’d recommend approaching the John Moores Prize Winners exhibition in room 5 on the gallery map through room 15 and following the thread through from there.

An early highlight is the Merseyside favourite “Harmony in Green” (1997), by Dan Hays (b1966), which features an exquisitely precise, largely photo real image of an empty bird cage. The painstaking reality of the depiction is punctured by the symphony of green tones used to render the segments created by the criss-cross of the cage’s bars. The title is borrowed from one of Monet’s monumental water lily works, and as it suggests the real subject of the painting is the colour green itself and the picture an exercise in lyrical abstraction designed to display the dexterity of a single hue.

Supporting the work on show is an insightful video projection, featuring the prize winning artists describing the techniques, inspiration and themes related with their paintings. The exhibition also spells out the development of the prize itself: until 1967 there were categories for sculpture and also for French and Junior artists. Since 1967, all non-painting disciplines have been consciously excluded which tells a story of the history of the proliferation of different media and practices. It feels fitting that within the John Moores Prize there is a protected habitat for the evolution of painting exclusively.

It is also fitting that the exhibition features an artist who I believe is the most important British painter of the twentieth and twenty-first centuries, a man who has systematically reinvented every sub-genre during his breathtaking career – the mighty David Hockney. The pristine colour panels and comic strip inspired rendering of his work “Peter Getting out of Nick’s Pool” glisten with the boundless optimism of vibrant youth. The limitless light of the Californian sunshine floods the canvas embodying the new found freedom realised via his 1960s relocation to the US West coast.

On the whole the exhibition is a must see for anyone interested in the history and evolution of painting in Britain. Many of the significant stylistic developments from the second half of the twentieth century onwards are represented in a staggering selection of cutting edge works. The exhibition is testimony to the profoundly positive impact John Moores and his prize have had on the development of the medium and the treasures both have delivered for the enjoyment of the people of Merseyside.