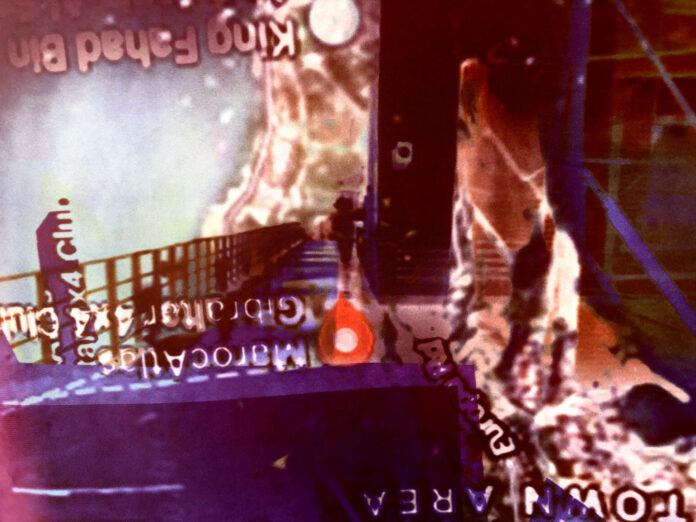 Finally finding a chance to find Liverpool Arab Arts Festival’s installation at Mann Island was a thrill. Not just because seeing art in person is rare right now, but because this is the first time I’ve seen a 2D work installed by itself at Mann Island.

The space lends itself to ambitious installations where people can interact with the work in physical ways, and it was an unexpected use of that vast atrium to have two works hung on a wall between Open Eye Gallery and RIBA North.

The digitally printed chiffon works by Jessica El Mal skews and dissects the sea border of the Strait of Gibraltar, an international border policed for human trafficking, illegal movement of goods and (as every international sea border fumbles with) fishing boundaries.

I’m not sure if Jessica El Mal intended for her work to be funny or dryly satirical, but I laughed aloud at the Rugulopterix Okamurae Algae’s ability to cross police lines undetected, and wreak havoc on the coast of Southern Spain.

It’s a really light hearted way to tackle a serious issue, without diminishing the challenges of necessary human migration. Given that humans are the most destructive organisms on the planet, the fact we concern ourselves with borders is slightly insane. We manage budgets based on border the flora and fauna of the world have no concept of, which leads to surveys on the natural world that separate migratory patterns of birds and fish based on which man made borders they travel through.

In the context of LAAF the fabric hangings, Grounds for Concern, raise questions over how and why we concern ourselves with human migration, and why there is any stigma attached.

Paring back the display to two panels from the usual interactive installations audiences travel through in the Mann Island atrium draws you in as the only work in an otherwise barren space, pulling you to a corner of the venue with views through to the docks, and all the history of human migration held there.