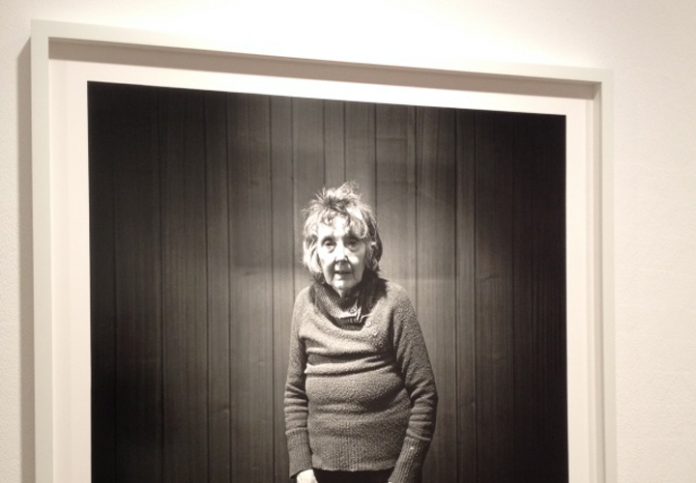 It was a busy evening across Liverpool with a few simultaneous launches taking place. Among them, Open Eye Gallery’s national, biennial visit from Jerwood Photoworks Awards. The three winners, Joanna Piotrowska, Tereza Zelenkova and Matthew Finn, were selected from over 380 submissions in response to an open call to UK-based early-career photographic artists.

With all three using black-and-white photography and working in film rather than digital, you might say Matthew Finn portrays the more obvious narrative of the three. But, that would be discrediting this multi-layered and tenderly emotive work that portrays the steady decline of his mother’s mental health, which began part way through this 29 year project.

Sequentially, you see her go from middle-aged vitality through a wheelchair-bound descent, into residential living and through the onset of dementia. Finn first began photographing his mother in 1987 at her home in Leeds and concentrated on the simple visual documentation of ordinary, everyday domestic moments in place of the usual generic photographic imagery of family events. Through his starkly poignant images, Finn leads us through a story that not only brings home our own and our loved one’s impending mortality, but he also manages to sensitively capture the warm, fragile ephemeral beauty and the natural cycle of a life lived.

Net curtain domesticity also features in Joanna Piotrowska’s works. However, as a backlash her images are of adolescent women recreating poses from self-defence manuals in a domestic setting. Through their poses, Piotrowska’s women are trying to reclaim their bodies from an atavistic indoctrination of woman as passive. There is a real sense of discomfort in her work that resonates on a more subconsciously visceral and sexual level. Submissive and dominance play a central role as her young women begin to explore their sexual identity through their ascent into womanhood, where they are discovering that self-defence is integral to the role. Her images show the awkward, anxious off-camera side of our current pouting social media teen.

Tereza Zelenkova’s work psychologically places her subject on the outside of the lens as she explores the sensitive poetics of landscape and the dark mythical stories tied to her country of origin; the Czech Republic. Her photographs have an eerie narrative with the human element conspicuous by its absence, or as voyeur. Zelenkova encourages a gothic interpretation through the portrayal of the country’s bohemian landscape of forests, sandstone rocks, and a quietly but faintly sinister beauty behind the mask.The one image that does include people sees all the faces veiled. You know within her images there are stories, but Zelenkova chooses to withhold the narrative and obstinately remain taciturn. Meaning whatever secrets her subconscious holds, she’s keeping them to herself.

The Jerwood Photoworks Awards was established in response to a need for opportunities that support early career artists in making and presenting new work with sustained support from established professionals. Each winner received an award of £5,000 to support the making of new work for the exhibition. Mentors for 2015 include artists Gillian Wearing, Simon Roberts, Broomberg & Chanarin and Alec Soth; Sotheby’s affiliated curator and art historian Rodrigo Orrantia, Financial Times photography critic Francis Hodgson and independent photography publisher Michael Mack.