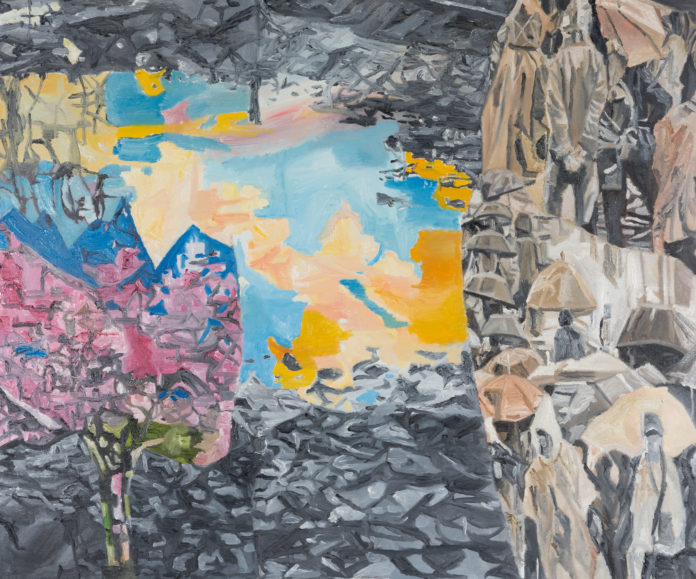 Victoria Gallery & Museum has hosted some wonderful multimedia installations over the years, one was, I think, the first exhibition I wrote a review of, by Emma Gregory. It was a curious labyrinth of personal ephemera telling a story that transcended into a common tale anyone could relate to. More recently, an exhibition of bafflingly delicate ceramics by Phoebe Cummings, New Perspectives, took the gallery space over in a thoroughly interactive piece of installation.

So walking in to an exhibition of paintings was an unexpected surprise at their latest show, Dystopolis.

Jasmir Creed is the artist behind the exhibition, but there is more to the show than one artist. In fact, the most important part isn’t the art at all, it’s a book published by the University of Liverpool to accompany the exhibition, featuring new critical writing by Dr Lauren Elkin and Dr Graeme Gilloch inspired by the artist and her work.

The artist remarks that she’s a flâneuse (for those of us who didn’t go to art college, that’s the female equivalent of a name given to a man who walks, observing as an occupation, paid or unpaid), which shows in her work.

It’s a particularly academic exhibition in that respect, visually brilliant, but at the same time, not entirely accessible in its subject, which is an observation of modern life from the eyes of an educated artist. References to sky pop in and out, which will seem straight forward to many, but in the world of the flaneur, are more a poke at those of us who don’t take the time to observe the cracks in the metropolis that let the light in.

‘No one ever looks up’ is a typical lecturer’s training call, and getting stuck on that can be fairly limiting. It’s this point where Jasmir Creed’s work is unique. As a flaneuse she seems to be poking fun at the flaneurs of patriarchal history, who lauded their ability to look up from the pavements, by using her painting to look everywhere.

Slightly disorienting in a way, creating mountains out of people, and skies from the ground, her canvases express something whimsical, and excited – a blind fascination for the world around.

Even in the darker works, with their light taken from shadowed streets, there is a bright spirit behind them which uplifts you when you stand reading the works.

Alongside the paintings is a significant new publication, the first in a long time of its kind produced by Liverpool University, with Dr Lauren Elkin and Dr Graeme Gilloch exploring the images to develop new critically written pieces to accompany the work. The book is formally printed by Liveprool University Press which implies confiendence in the exhibition as well as Jasmir Creed’s career prospects.

She is an artist going from strength to strength, with this standing out as a particularly captivating exhibition, that has made a gallery most used to installation and sculpture embrace a painting show which requires time to understand.

So if you do find yourself with time (a particularly important task in a January filled with catching up) make it time well spent by reading into this unusual and unflinchingly confident exhibition.

For the Love of Books at Huyton Gallery Reviewed by Vicki...