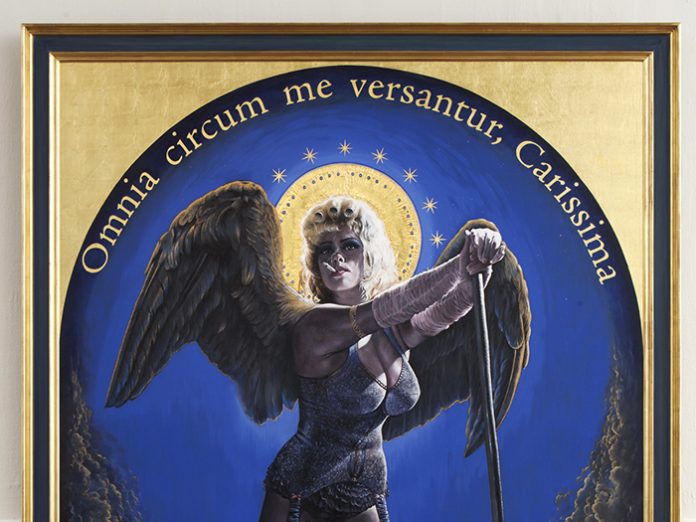 It wasn’t so long ago that the Williamson Art Gallery in Birkenhead had its neck saved from the council chopping block when a budget cut by half would have resulted in a managed decline. Saved by the skin of its teeth and by a community action group headed by Frank Field, this proud Neo-Georgian gallery is now a vibrant local community arts hub, making the most of its space.

In keeping with the gallery’s grandiose style is the exhibition “IT’S ALL ABOUT ME, DARLING” by local-boy-done-good, Nick Hugh McCann, who, growing up in Birkenhead, recalls being taken to the Williamson by his dad before the family moved from the area. A former graduate of London’s Slade School of Fine Art, McCann is a man with such diverse interests and a career that encompasses; film, TV, publishing, photography and art, it’s a wonder he finds time to paint.

Not stoking one formulaic style, his work also spans a raft of genres. His subject matter is scattered making him impossible to pigeonhole – and you know how we like to put people in boxes. However, it’s plain to see that his influences come from the more sensitive personal works (clawed in from family and friends) to client-based commissions and the diverse amount of projects he is professionally involved in; from wildlife to classical history, heritage, and film. His work is so varied in style that at one point I had to question whether I had walked into the gallery’s summer show. At one end of his artistic spectrum are milky watercolours emulating old masters, the odd wildlife landscape, and a biro-drawn self-portrait. The other side of his artistic personality depicts bold figurative works and plenty of unabashed sexuality and humour.

Keeping it local, a few large, bold, vibrant and majestic pieces head-up the exhibition, namely Stefanus Gerradus (Steven Gerrard in the guise of Caravaggio as St. John the Baptist III), a connection that may be multi-layered or flippantly comedic – read into it what you will. We also have Barbara Windsor and the cast of the Carry On Films being re-cast in William Frederick Yeames’ – And When Did You Last See Your Father?’  McCann’s is a carnivalesque interpretation of the considerably more serious original at the Walker Art Gallery. The centre piece, from a local perspective, is the striking, hair-rollered, basque and stockinged: “IT’S ALL ABOUT ME, DARLING” – Duchess of Birkenhead, with her high-heeled shoes astride Liverpool and painted in a no-expense-spared medium of 24ct gold gilding and lapis lazuli.

McCann has a great technical expertise and a real skill for portraiture, and having only recently started painting seriously again is gathering strength in a distinct and unique direction. The interesting question to watch here is whether he will he will stick, or not, to one defining artistic style.

As for the Williamson; it now hosts several exhibitions, a book shop, plus art and craft shop, café, workshops, and regular concerts. In addition, a collection is now underway to help fund a new courtyard garden that will breathe even more life into this thriving and thankfully reprieved listed building.

Nick will be giving a guided tour on the 6th of August at 11am.