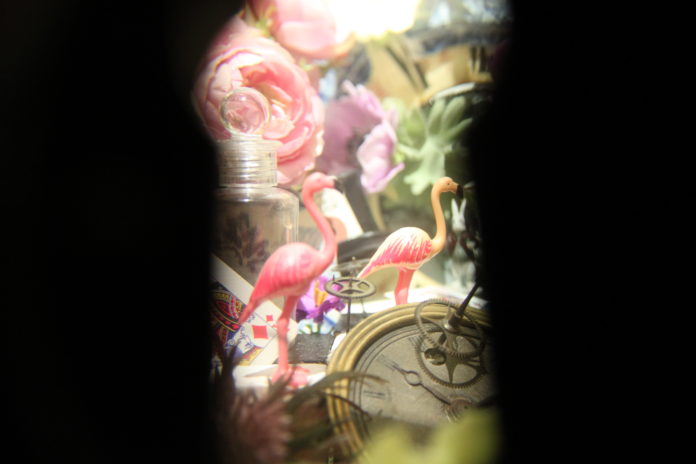 A pair of closed curtains mark the entrance to the Inspired by Alice exhibition at The Atkinson in Southport curated by Joanne Chamberlain.  In the field of psychology and neurobiology the process of opening a pair of curtains represents a mental and emotional openness and it is in this cerebral state, amplified by a feeling of excitement, and just a hint of trepidation, that one steps onto the artificial turf- covered floor of gallery three.  The exhibition is promoted as an immersive experience, examining the continuing fascination with the novel Alice’s Adventures in Wonderland by Charles Lutwidge Dodgson (1832-1898) written under the pseudonym Lewis Carroll.

Second only to the bible, the novel, written in 1865, is the most published book in the world and like a prismatic compass, the exhibition points you with accurate observation to the novel’s stellar points of inspiration over the last 150 years.  For example, there are the five limited-edition prints by the surrealist artist Salvador Dalí (1904-1989), which are part of the twelve illustrations he created for the book Alice published in 1969 by Maecenas Press.  Other unique items ‘inspired by Alice’ and on loan from the Governing Body of Christchurch, Oxford, include nine Lewis Carroll sketches from 1863-1864 related to the novel, and a chess set handmade by the American artist Margaret (Meg) Emes Chappell  (1952-2001). 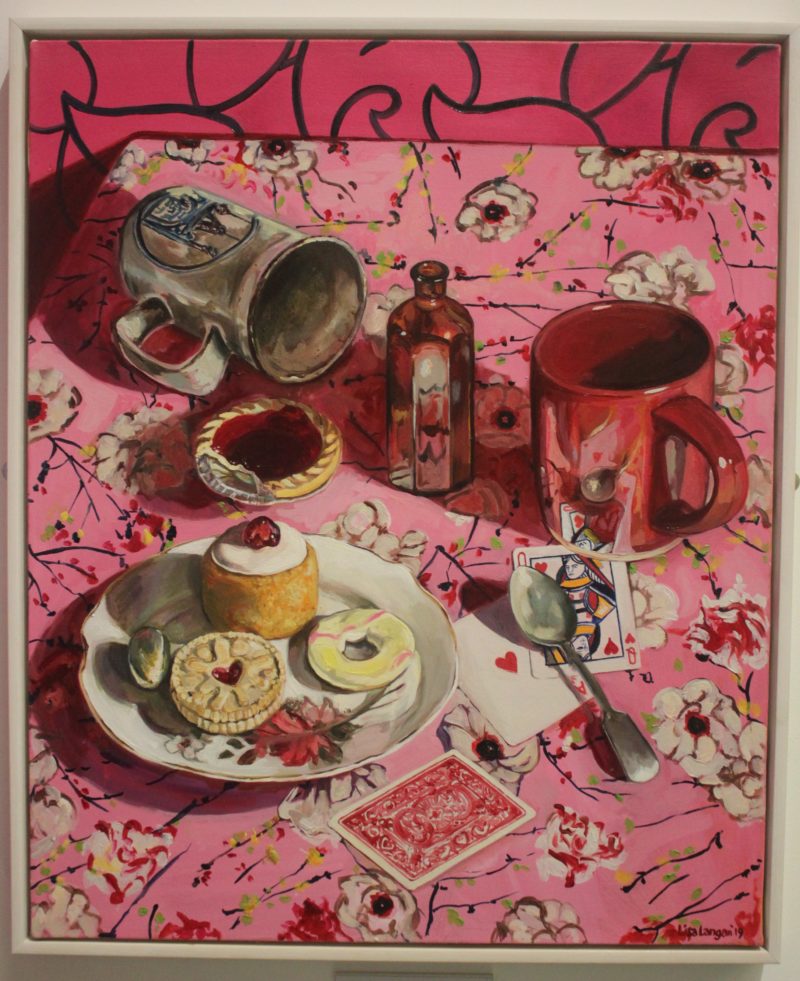 Although Lewis Carroll wrote the novel in Oxford and died there, he originally came from the North West.  Indeed, the legendary character of the Cheshire cat takes its name from the county in which Carroll was born, his birthplace being Daresbury, near Warrington.  Several books on display, namely Lewis Carroll and Cheshire by Arthur Whimperley published in 1991, and Lewis Carroll Child of the North by Anne Clark Amor published in 1995, underline this connection.  For fans of the Cheshire feline there is also an original illustration of the cat by the famous author Mervyn Peake (1911-1968).

Inspiration is defined as the process of being mentally stimulated to do or feel something creative.  The perpetuity of this definition is brought to the fore with the plethora of modern media ‘inspired by Alice’.  Notable highlights include the oil painting entitled Alice Issues by local artist Lisa Langan, Shelly Allison’s white rabbit and jewellery designed by Trick or Treat Crafts, which are available for sale.  An intriguing piece is by Steven Talbot entitled “The loveliest garden you ever saw” from Down the Rabbit Hole, Alice in Wonderland in which you have to bend down so as to look through a keyhole, replicating that Alice moment, upon which you will see a vista of flamingos and flowers.  Similarly, an animated picture of a ‘speaking’ Dodo, voice-over by Martyn Griffiths, has a mesmerizing quality.  For the young at heart a table set in the spirit of the Mad Hatter’s Tea Party complete with dress-up costumes awaits.

Barbara Lee Fredrickson (b.1964 ), an American Professor of Psychology, suggests, in her broaden-and-build model, that emotions such as joy and love broaden a person’s available repertoire of cognitions and actions, thus enhancing creativity.  Perhaps therein lies the secret of why the novel inspired and continues to inspire artists through the ages.  When you exit through the curtains you cannot help but leave with a sense of having been to a wonderland of inspiration, awestruck at how the words of one man has had such a ripple effect, connecting humanity through the decades.  In this the curator has achieved a curatorial feat to be highly applauded.

In homage, the final word must be left to Lewis Carroll, however after seeing this exhibition it is a statement, spoken by the King in the novel, that seems to resonate with a new truth: “Begin at the beginning…and go on till you come to the end: then stop.”