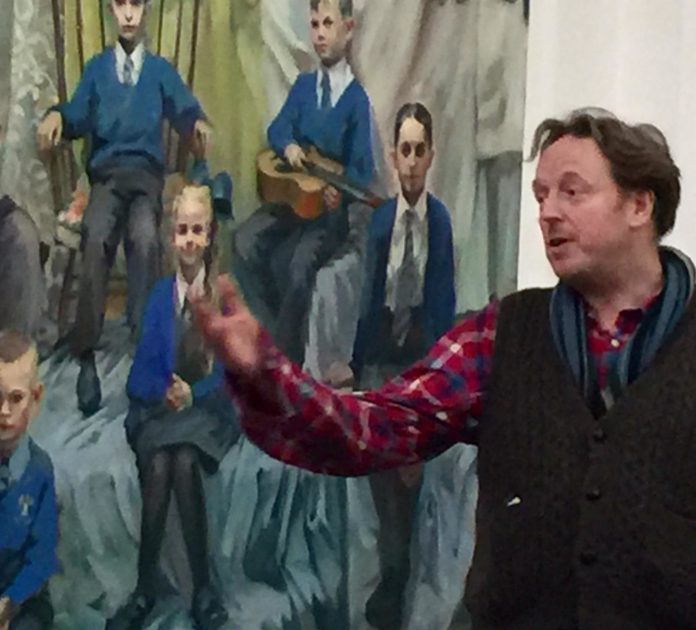 “Painting is more than just a medium, it is an encounter with time”
– André Malraux.

Belonging to the same Portrait and Life Drawing Group in Little Crosby as Philip Garrett, I’ve seen something of how this body of work has come into being.  But that prior knowledge didn’t prepare me for the impact of walking into the Kirkby Gallery and seeing such a celebration of the human face and form.

There are several dozen pieces – of sculptures as well as drawings and paintings.  One might think that having so many artworks brought together could lead to cacophony but there is instead an air of tranquillity.  There is a tangible sense of the interaction between artist and sitter; the one working to create a likeness and convey the essence of the person before him, and the other entering a state of stillness and calm to hold the pose.  This is what fills the gallery air – this symbiotic energy of concentration.

In his address on the opening night, Garrett spoke of the privilege of having someone sit for him, of his gratitude to all those who freely gave of their time.  For many it was a first time experience and it was touching to observe them standing before their portraits in the gallery, with a hint of self-consciousness, but also with a sense of pride – and something else – a kind of wonder at this alchemy of oil paint and canvas that has immortalised them.

A few of those who sat for Garrett described how they didn’t usually go to art galleries but that the experience of spending time with an artist, and seeing that an exhibition can be about “ordinary” people, encourage them to think differently.  Part of the appeal of the works is that they are not of idealised beings but of people like ourselves, with all the fragilities and imperfections that make us not ordinary. 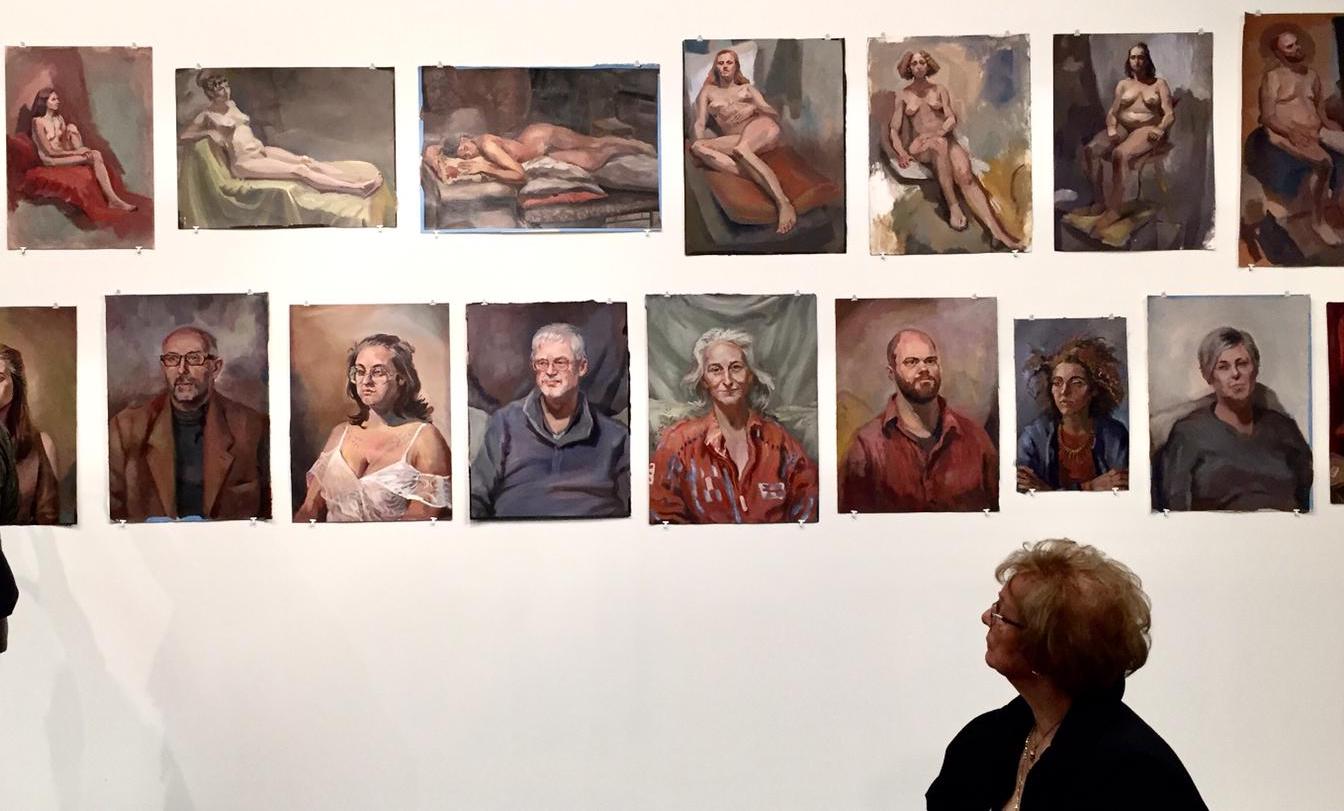 At the heart of this exhibition is the work Garrett has done with local schools and it’s brilliant to see the uninhibited clay figures they have produced under his tutelage; terrific as well for the children to have this opportunity to exhibit alongside a professional artist.  A few of them from St Michael & All Angels School in Kirkby are featured on a huge canvas, the largest in the show.  It is a composition on drapery that resonates with echoes of group portraits from art history.  Their separateness from each other is in contrast to the customary school image and the result has a haunting quality, heightened by the teacher who somehow looks Victorian, sitting to one side, almost out of the frame.

Garrett has depicted all the sitters in what has become known as the atelier style, that of classical proportions and technique.  He has had the experience of contemporary art teaching, including a Masters degree at the Royal College in London. But he realised that it was figurative art that was calling him, something that in 2004 put him at odds with the RCA, whereas now the zeitgeist has shifted and many art colleges are offering courses in traditional drawing.

It was back in Merseyside, in Crosby, where Garrett met the man who became his mentor, namely the sculptor Terry McDonald*, now aged 90, still working and still giving freely of his knowledge.  The life-size portrait of him is one of the most striking in the exhibition; the hands convey the sculptor’s strength, one of them almost coming out of the canvas as if yearning to feel clay in its grasp.

This exhibition represents a recent, intense period of work by Garrett and demonstrates his unceasing endeavours to hone his craft. Some of the earlier sculptures reflect his interest in commemorating local historical figures, among them, Jeremiah Horrocks, the 17th century Toxteth man who became known as the father of modern astronomy.  Garrett has campaigned for Horrocks to be honoured with a life-size public statue in Liverpool (https://www.artinliverpool.com/launch-of-fund-raising-campaign-for-statue-of-jeremiah-horrocks-founder-of-modern-astronomy).  For his maquette, on display here, Garrett has had to use his imagination since no known image exists of Horrocks, but his usual way of working, and his passion, is to paint, draw and sculpt from life.  There will be several chances during the run of this exhibition to be part of it all, as Garrett will be setting up a studio in the Gallery to continue working on a large canvas.  Anyone who would like to sit for him should contact the Gallery (details below). 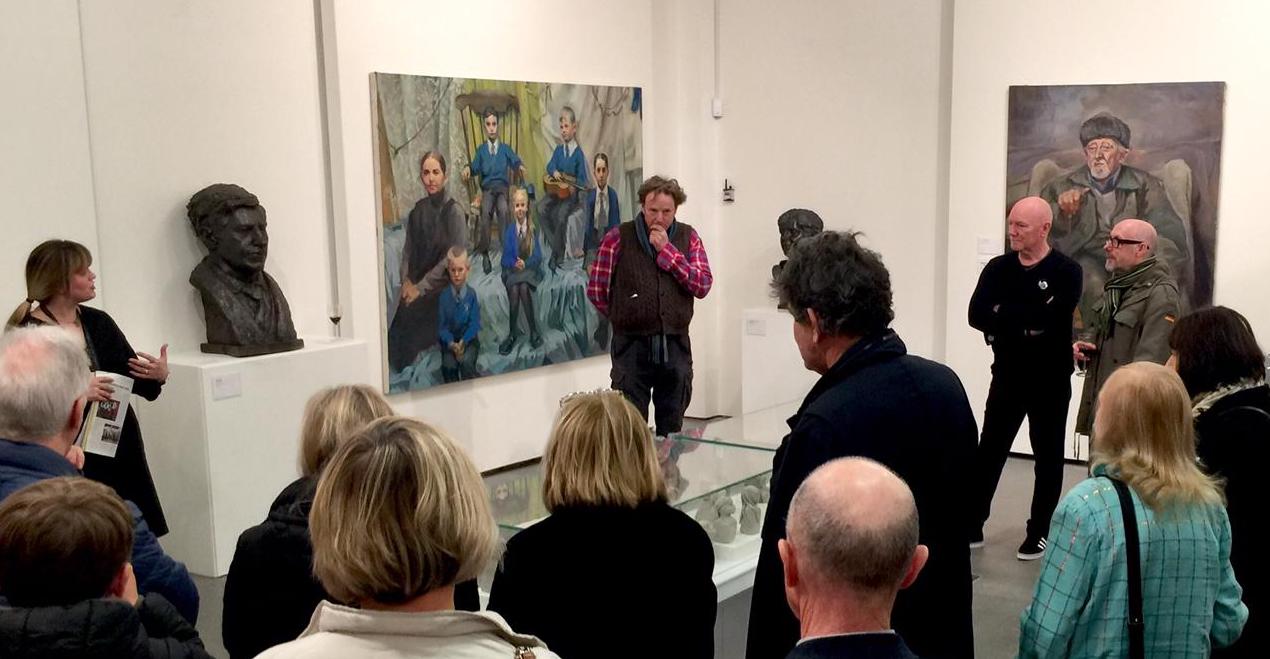 If you’ve ever wondered what artists do all day, then this exhibition should give you a good idea – especially the film of Garrett moulding a large clay relief sculpture, which shows the sheer physicality of the process.  This exhibition is a reminder that having talent is one thing, but what often counts for more is dedication and continuous hard work.  It is also a rejoinder, in the face of so much governmental abandonment of the arts, that free council funded galleries such as this are culturally nourishing and highly valued by local communities.