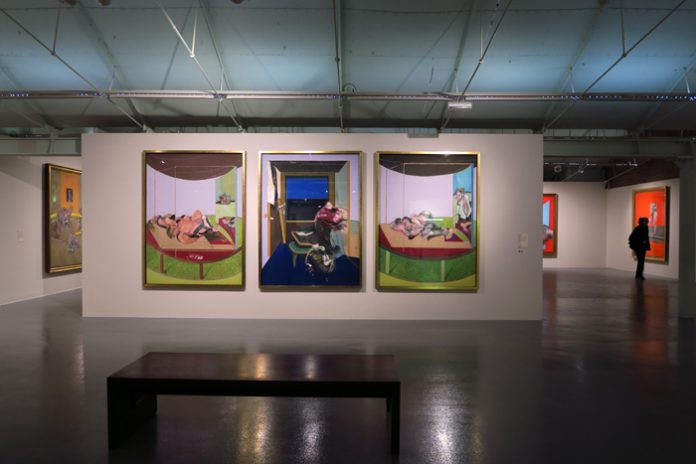 “Rather than a title for this season, we have a question: Why do we need to paint?” Said Francesco Manacorda, cautiously, to a room of press ready to pounce on a summer programme that, on the face of it, showed very little variety. That question shut us up though. Three shows that all express how painting questions contemporary culture through questioning itself.

The shows, including a special exhibition of Maria Lassnig and a concentrated exhibition of work by, New York based artist, Ella Kruglyanskaya, were massively overshadowed by Francis Bacon: Invisible Rooms, which breaks from the tradition of bowing to the artist that has been the flaw of international galleries for decades. The exhibition focusses on Bacon’s working environments, and his working methods; things that the artist spent the majority of his life denying the existence of.

It isn’t new research by any means, but I can’t help feeling that if Francis Bacon was alive he might have some issues with letting his work be exhibited alongside these drawings. It’s a bold, and partly funny, statement by Tate, that regardless of the artist’s intentions, a curator can change the story entirely. And I’m so in love with that notion, that someone so far detached from the work can have such a heavy influence on how it is received.

The first thing you are greeted with is a photograph of Bacon’s studio, and the last thing you see before you leave is two more. It’s a huge statement that I hope isn’t lost on visitors, as the significance of that history should be what defines this exhibition, and helps answer the question the Artistic Director asked in his introduction.

Why do we need to paint? Because it satisfies our ego. It questions our being. It questions our nature. It defines our position. Those answers might well seem a little up themselves, but it’s the reality of it, at least as far as this exhibition tells us.

The exhibition pulls out all the regulars, the cages, the crucifix, the Popes and the Freuds. So for anyone who wants to see the Bacon they recognise, it’s there, hidden behind all the statements and preliminary drawings.

But I can’t help but be excited about his overpainted press images of boxers, or the scribbles in the back pages of books that were hidden on shelves – probably genuinely forgotten until he read that book again. Things that apparently didn’t exist in 1992. What that makes for is a really exciting segmentation of this show, sitting in the middle of the gallery, making completely sure that this collection of preliminary thoughts and ideas is taken in.

Figurative sketches and doodled ideas are the big success of the exhibition, lowering this demi-god of modern art to a human level, proving that he needed to think about how things would look. He had to find a balance with his own work, and this instalment of Francis Bacon’s invisible rooms is an incredibly educational insight into the spaces where he developed that balance.