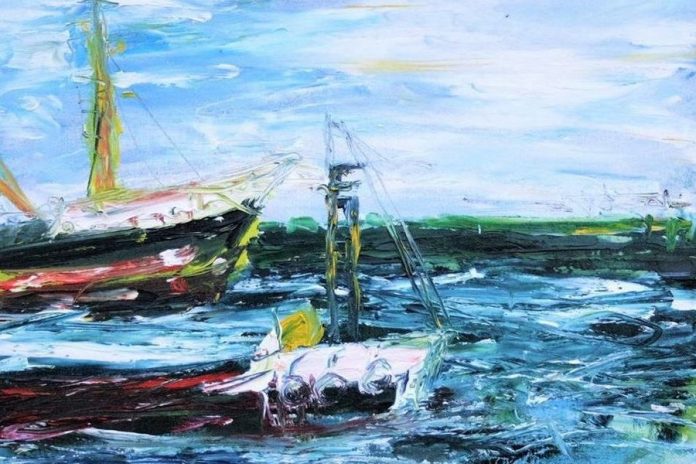 In today’s commercial art scene there are not many people who would tackle a subject as head-on as Claire McCarthy. Most artists who paint the Mersey seek to prettify in order to sell. Meaning, the artist usually has to polish the rough edges and present their work to their viewers through a certain rose-tinted perspective.

As a result, the natural mud-brown of the Mersey might become a muted soft grey peppered with carefully implied rays of dappled sunlight. The dirt and dust that hangs over Birkenhead and Liverpool will be conveniently eliminated and replaced with an attractive low-lying mist. Or, artists will paint or photograph on atmospheric days or moonlit nights in order to capture the river draped in its sedate and calm Sunday best. We then have the Mersey perfected. Not so with Claire McCarthy, whose plein air style of painting nature as it is, has chosen the Mersey for her canvas, warts and all.

So, while commercial galleries may be full of paintings and photographs of our industrial port from the lightest and most selective of perspectives, McCarthy paints her work in-situ and she’s not weather-fussy. Inspired by the Brian Eno album, ‘The Ship’, which opens with the lyrics ‘the ship was from the willing land – the waves about it roll’, she will paint directly from the landing stages and/or while travelling back-and-forth upon the Mersey Ferries. It means, through her work we can almost smell the very ferry aromas of wood, metal and fuel; taste the salt water; feel the biting cold; and hear the seagulls.

Her ferry crossing images even go as far as to convey a slight wave of motion sickness to those, who like I, only have to look at a wave to suffer. In order to do this, she often downs her brush to paint only with her hands, fingers or sticks to more accurately define the unpredictable, restless and turbulent spirit of our river. She has the ability to make her artwork experiential, bringing old maritime masters into the 21st century and once again to the fore.

In addition, McCarthy bravely tackles subjects including tugboats, cranes, wind farms and the maritime industry at its most industrial. Her mediums span large-scale acrylics to sketchy watercolours that don’t eliminate the true working sentiment of our river, but seek to include. Through this, she manages to capture the raw, stark, bleak and simultaneously colourful beauty that arises from our home port. The Mersey’s light may be often hidden under a bushel, but scratch beneath the surface and even on the most dismal weather days the river has a different, more austere beauty. But it’s one that is still very much still there.

Expressive Art on the Mersey exhibition by Claire McCarthy is brought to the Williamson Art Gallery by Pip Seymour Fine Art Suppliers, The Dures Partnership, Bibby Marine Services and Liverpool Propeller Club, who through their sponsorship, allow exhibitions like this to take place.