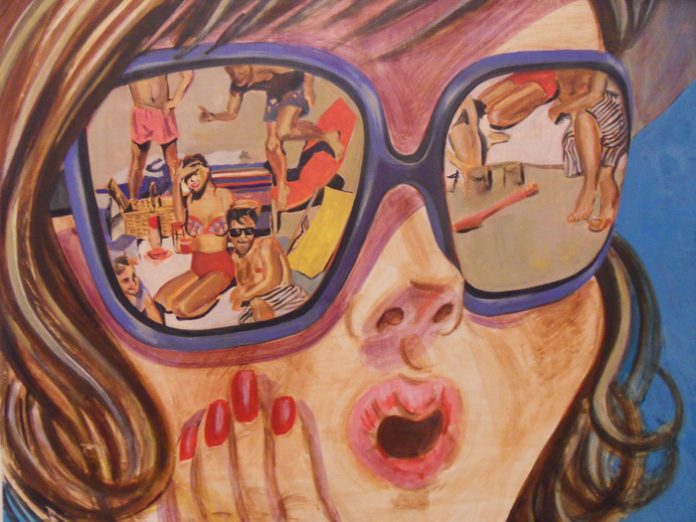 Probably the most significant statement for Tate Liverpool’s Summer Programme is the inclusion of Ella Kruglyanskaya. The New York based Latvian artist approaches painting with a heavy prejudice towards frames. So no, you might not have heard of her, and you might not remember her after leaving the archive exhibitions on the top floor, but this article outlines why you should. Reason one: painting has always been, if nothing else, relevant to its surroundings. This is.

The Wolfson Gallery on the ground floor of Tate Liverpool isn’t the largest of spaces this gallery possesses, but it’s the first one you see. That means that anything in there has a responsibility to everything else in the building, to maintain and inspire interest; to get you up the stairs. What the curators and staff agree on with the three new exhibitions – Francis Bacon, Maria Lassnig and this one – is that the critical theme is ‘why paint?’

That leaves a lot to be discussed, but what needs to be understood to understand their question is the tense they ask it in. Why paint? Present Simple; The rolling form of the present tense; If you draw it on a time line it sticks something on a present line, and draws dotted arrows to the past and future. Present, with context. And you can’t ask a question like that with only the work of two dead artists to answer it. Ella Kruglyanskaya curates an exhibition of past work, alongside work that the Tate Liverpool’s Assistant Curator, Stephanie Straine, describes as being “wet on the canvas on its way here.” And for a retrospective of a living artist to manifest itself like this, surely must supply ideas for the future. In that sense, or that tense, this show is the key study that answers the question posed by Francesco Manacorda, “Why paint?”

A very small part of her success is down to her knowledge of techniques, and of art history, but from a public perspective, I think I’d struggle to be interested I her Etruscan influences. Rather, finding images that reflect modern understandings of what it means to be an image. That question is the one that will have pulses racing, and the one that has her work on display here. It’s all well and good explaining her influences, but work on this scale, of this kind needs to justify it place.

It does so by reflecting present day notions of the female gaze – what it captures, or what we see that it captures, or what we present that it captures. Those three options are played with around her work, in different ways and on different planes in each series. The work that pulls that understanding out though is Girl with Sunglasses. You can almost see it without looking. A face staring through glasses, with no eyes and a changeable expression, but letting everyone who looks know exactly what it sees. It’s a small but strong painting that sets the tone for the show.

Kruglyanskaya’s development of that reflection was to exact a stance about framing the image. At first glance, I missed the trick, and perhaps didn’t give the work the celebration it deserved, simply wandering past it thinking, “Oh, well there’s a vase”. The selection of vase paintings though, once you know what you’re looking at deserve a serious look, and perhaps a little laugh, because there’s an element of humour thrown in there too.

The images, which are fairly well painted, depict not a vase, but a page. A catalogued page of a book, which shows a photograph of a vase. A painting of a page of a picture of a thing. It’s clever, but a bit sarcastically clever, getting the audience to miss its value almost on purpose, before letting them into the joke.

And if you were still wondering why it fits alongside Lassnig and Bacon, it’s because their images wrapped those jokes up too. Bacon, if you look in the right place, left your own shadow in the corner of many of his works, so as you stand and look, you have an intended influence on his work. He was commenting on the place of his own images, as something not accessible to this world. And Lassnig was rarely anything other than sarcastic, trying very hard for the majority of her life to justify her work in New York, by belittling the status quo of representation.

What the combination of the three sets of work makes for is a past and a present, with a hint at the future of why we paint. There’s no real answer, because the question’s just too big for one. But if you go to Tate Liverpool to see Bacon, see this first, then see Lassnig, then see Bacon. Don’t skip the thing that actually makes sense.

Ella Kruglyanskaya at Tate Liverpool
1 of 4